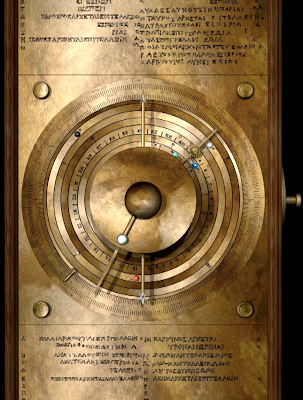 When we think about scientific and technological knowledge in the ancient world, one generally thinks of philosophy and a little bit of pre-scientific musing about the nature of reality. Water? Fire? Flux? The ancient Greeks had knowledge of mathematics and geometry, of course, and a certain level of descriptive astronomy. But nothing really surprising; their scientific and mathematical achievements were limited. Or so it seems. But take a look at this description of the Antikythera mechanism (link), the scientific paper by a research team at University College London (link), and the associated Vimeo video (link), and you'll feel a jolt of paradigm shift about your assumptions about science and technology in the ancient world. This machine, dating from the second century BCE and discovered by sponge divers in the Mediterranean in 1901, was a corroded and incomplete group of fragments (one-third of the complete mechanism), and astonishingly enough, its workings have been decyphered and reconstructed. It is a geared device permitting the modeling and prediction of the motions of the five known planets, the moon, and the sun. Given that it represented the planetary bodies from the perspective of earth (geocentric model), the motions of the planets were complex and seemingly a bit chaotic. And the device itself is amazingly complex, embodying a layered set of gears with tooth counts permitting representation of the movements of the celestial objects. It was a complex and accurate analog computing device -- from a civilization that flourished 2,200 years ago. 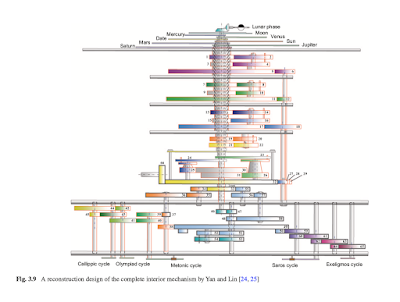 credit: Lin and Yan, Decoding the Mechanisms of Antikythera Astronomical Device (Springer 2016, p. 56)
The journey of research that has permitted decyphering the machine is remarkable enough. (The video tells much of that story.) But even more eye-opening is the completely novel insight the reconstruction offers into Greek astronomical mathematics, engineering sophistication, and (as-yet unknown) fabrication capabilities. Metallurgy, gearing, delicate assembly, remarkable design -- the device is an amazing achievement demonstrating a background of advanced mathematical and technical expertise, and yet one that does not seem to have clear antecedents in the history of Greek science and engineering. So the discovery and reconstruction of the Antikythera mechanism seems roughly as surprising as it would be to find evidence of a network of electrical communication devices in an excavation of a medieval Frankish village: entirely at odds with our current understanding of the levels of scientific, technical, and engineering knowledge available in the time period. 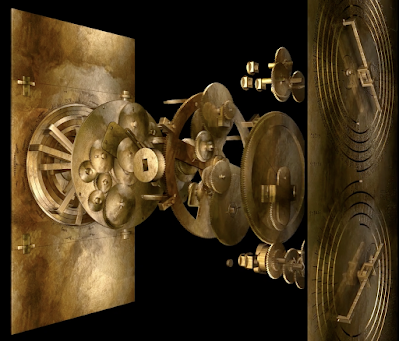 The device cannot have been the result of a single "genius" inventor (e.g. Archimedes); its design and fabrication plainly required an infrastructure. And yet there are no other known artifacts from the ancient Greek Hellenic world with this level of sophistication. Parmenides comes into the mathematics of the device, and the mathematics of prime factors is crucial for the movements of the gears. A related device, the astrolabe, was invented and fabricated in the ancient Greek world in the second century BCE, which embodied a similar and fairly precise knowledge of planetary movements, but is orders of magnitude less complex.
There is a great deal of useful background information on the device in Lin and Yan, Decoding the Mechanisms of Antikythera Astronomical Device (Springer, 2016). They summarize the possible history of this device in these terms:

It is confident that the device was not made by Archimedes, but might come from Syracuse in Sicily, the Corinthian colony where Archimedes had devised a planetarium in the third-century BC. Furthermore, it is speculative that the craftsmanship for making Antikythera device might be a heritage of manufacturing technique that originated with Archimedes in Syracuse. However, this attractive idea is waiting for proving. (57)
Lin and Yan also quote two passages from Cicero (d. 43 BCE) which appear to describe a mechanical device with similar functionality. The device described by Cicero is not the same design, however, because the text appears to make clear that the device is spherical in shape. Cicero lived roughly a century after the presumed date of the Antikythera mechanism invention.

Philus: ... Listening one day to the recital of a similar prodigy, in the house of Marcellus, who had been his colleague in the consulship; he asked to see a celestial globe, which Marcellus’s grandfather had saved after the capture of Syracuse, from this magnificent and opulent city, without bringing home any other memorial of so great a victory. I had often heard this celestial globe or sphere mentioned on account of the great fame of Archimedes. Its appearance, however, did not seem to me particularly striking. There is another, more elegant in form, and more generally known, moulded by the same Archimedes, and deposited by the same Marcellus, in the Temple of Virtue at Rome. But as soon as Gallus had began to explain, by his sublime science, the composition of this machine, I felt that the Sicilian geometrician must have possessed a genius superior to any thing we usually conceive to belong to our nature. Gallus assured us, that the solid and compact globe, was a very ancient invention, and that the first model of it had been presented by Thales of Miletus. That afterwards Eudoxus of Cnidus, a disciple of Plato, had traced on its surface the stars that appear in the sky, and that many years subsequent, borrowing from Eudoxus this beautiful design and representation, Aratus had illustrated them in his verses, not by any science of astronomy, but the ornament of poetic description. He added, that the figure of the sphere, which displayed the motions of the Sun and Moon, and the five planets, or wandering stars, could not be represented by the primitive solid globe. And that in this, the invention of Archimedes was admirable, because he had calculated how a single revolution should maintain unequal and diversified progressions in dissimilar motions. In fact, when Gallus moved this sphere or planetarium, we observed the Moon distanced the Sun as many degrees by a turn of the wheel in the machine, as she does in so many days in the heavens. From whence it resulted, that the progress of the Sun was marked as in the heavens, and that the Moon touched the point where she is obscured by the earth’s shadow at the instant the Sun appears above the horizon. (Cicero, De republica)

It is not easy to find detailed histories of science and technology for the ancient world. (Where is Needham when we need him?) What appears to be the most important book available on the history of engineering in the ancient Greek world is J. G. Handels, Engineering in the Ancient World, Revised Edition. Here are the topics contained in the revised edition from 2002:

There is no mention in this book of small gauge gearing, metallurgy, or clocks. The astrolab is not mentioned in the book either. Though gears and gear boxes appear in the index, these references appear to have to do with crude largescale applications in cranes or catapults rather than the fine small-gauge gearing required for clockwork or devices like the Antikythera mechanism.

The fascinating reconstruction of the Antikythera mechanism seems to have important implications for the telling of ancient history and philosophy: it would appear unavoidable that there were forms of knowledge and technique in the ancient Hellenic world that permitted the design and fabrication of remarkably complex and sophisticated mechanisms; and the mechanism itself reflected a sophisticated mathematical understanding of the movements of the planets. Science, astronomy, metallurgy, engineering, and techniques of metal working and fabrication appear to have been substantially more advanced than currently believed. And this in turn underlines a point that great historians have probably always understood: that the past is more complicated, more multi-faceted, and more surprising than we currently know.

(Here is a model of the mechanism created in 2005 by Michael Wright; link. And here is a very interesting lecture by Jo Marchant at Darwin College, Cambridge, on the same version of the mechanism (link). Note that the most recent model differs significantly from the 2005 model in its use of moving rings rather than pointers on the front face.) 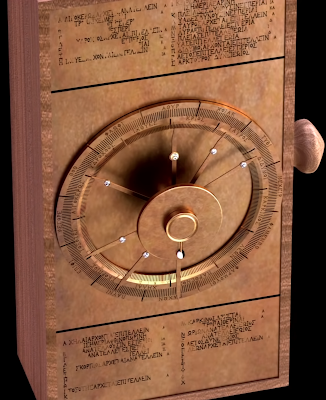 Email ThisBlogThis!Share to TwitterShare to FacebookShare to Pinterest
Labels: CAT_histtech