Compassion and the moral emotions (Nussbaum) 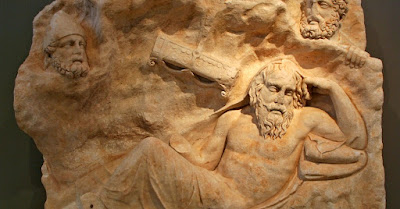 image: Philoctetes injured on Lemnos
How can the atrocities of the twentieth century lead to the creation of a better version of humanity? One theme to explore involves the moral emotion of compassion, and the idea that this is an emotion that human beings learn through experience and reflection. Crucially, we need to explore whether knowledge of history can help to inform the development of a culture of compassion. Both John Kekes and Susan Neiman provide some useful insights into the key question: how should a current generation engage with the history of the atrocities of the past century? Kekes contributes to this idea through his discussion of moral imagination, and Neiman contributes through her analysis of Rousseau's theory of the malleability of human nature.

The philosopher who has shed the most light on compassion is Martha Nussbaum. In "Compassion: The Basic Social Emotion" (link) she explores the importance that compassion and pity play in the moral ordering of human social life. (The subject is treated as well in Part II of Upheavals of Thought: The Intelligence of Emotions.) As the title suggests, Nussbaum regards compassion (or pity) as a prerequisite moral emotion for much of social life; and she believes that it must be learned. Moreover, literature, drama, and history can be crucial components of that learning.

Tragedy, as ancient Athenian culture saw it, is not for the very young; and it is not just for the young. Mature people always need to expand their experience and to reinforce their grasp on central ethical truths. To the young adolescent who is preparing to take a place in the city, however, tragedy has a special significance. Such a spectator is learning pity in the process. (39)
If we believe that the ability to imagine the ills of another with vivid sympathy is an important part of being a good person, then we will want to follow Rousseau in giving support to procedures by which this ability is taught. Much of this will and should be done privately, in families. But every society employs and teaches ideals of the citizen, and of good civic judgment, in many ways; and there are some concrete practical strategies that will in fact support an education in compassion. (50)

Nussbaum approaches the topic of pity or compassion through the story of Philoctetes, as related by Sophocles. She finds that Sophocles provides a nuanced and reflective demonstration of the emotion, within the context of a complicated social story. The value of literature in exploring moral concepts has been a strength of Nussbaum's approach to moral philosophy for a long time, and its use here is illuminating.
Nussbaum rejects the Humean view that emotions are the contrary of reason, knowledge, or deliberation; instead, she argues that at least some emotions, like pity and compassion, embrace both representation of the world and affective response to the world. Compassion is a crucial part of inter-personal knowledge: "compassion, in the philosophical tradition, is a central bridge between the individual and the community; it is conceived of as our species' way of hooking the interests of others to our own personal goods" (28). Further, "compassion is a certain sort of reasoning" (29). And "all compassion is "rational" in the descriptive sense in which that term is frequently used—that is, not merely impulsive, but involving thought or belief" (30-31).
Here is the analysis of pity or compassion that Nussbaum attributes to Aristotle:
Pity, Aristotle argues, is a painful emotion directed at another person's misfortune or suffering (Rhet. 1385bl3ff.). It requires and rests on three beliefs: (1) the belief that the suffering is serious rather than trivial; (2) the belief that the suffering was not caused primarily by the person's own culpable actions; and (3) the belief that the pitier's own possibilities are similar to those of the sufferer. Each of these seems to be necessary for the emotion, and they seem to be jointly sufficient. (31)

Nussbaum does not explicitly draw the connection between compassion and evil here that I believe is crucial -- in fact, she does not explicitly discuss "evil" in either of these works -- but the tie is straightforward. One fails utterly to understand the Holodomor or the killing pits of Poland or the Cathar Crusade if one fails to imagine the pain, suffering, and loss that each of these historical events involved, for millions of human beings. (Nussbaum refers to this particular form of moral blindness in her treatment of Emile in Upheavals; 322.) And, conversely, if one has a strongly developed capacity for the moral emotion of compassion, it is hard to see how he or she could consent to playing the role of an Eichmann or a Stangl. Here is a relevant comment by Nussbaum in the context of the dehumanization of the victims so often observed in the Holocaust and other instances of genocidal conduct:

This fact explains why so frequently those who wish to withhold pity and to teach others to do so portray the sufferers as altogether dissimilar in kind and in possibility. In The Destruction of the European Jews, Raul Hilberg shows how pervasively Nazi talk of Jews, in connection with their murder, portrayed them as nonhuman: either as beings of a remote animal kind, such as insects or vermin, or as inanimate objects, "cargo" to be transported. (35)

Nussbaum refers in Upheavals of Thought to other demeaning and dehumanizing mechanisms through which committers of atrocities reconcile their actions -- for example, by portraying the victims as unclean and disgusting. "Thus the Germans forged the will to carry out the atrocities"(Upheavals, 348).
To what extent are our moral sensibilities subject to growth, education, and development? Like Susan Neiman (link), Nussbaum draws a connection to Rousseau and his treatment of the emotion of pity in Emile. She finds that Rousseau's analysis of this moral emotion captures the fullness of reasoning and affect that she has described; and, crucially, she finds that Rousseau believes that compassion must be learned:

If Emile really does the cognitive work, if his imagination really contains the thoughts of pity, with all their evaluative material, in such a way that they become part of his cognitive makeup and his motivations for action, then he has pity whether he experiences this or that tug in his stomach or not. No such particular bodily feeling is necessary. To determine whether Emile has pity, we look for the evidence of a certain sort of thought and imagination, in what he says, and in what he does. (38)
And in Upheavals she returns to Rousseau:
I think that this, indeed, was Rousseau’s idea, when he said that Émile would learn compassion without hierarchy if his teacher taught him to focus on the common vulnerability of all human beings. “Thus from our weakness,” he concludes, “our fragile happiness is born.” Surrendering omnipotence is essential to compassion, and a broad compassion for one’s fellow citizens is essential to a decent society. (350)
Moreover, Nussbaum believes that the "teachability" of compassion is important: human beings and human cultures can improve their capacity for compassion through reflective experience.

If we believe that the ability to imagine the ills of another with vivid sympathy is an important part of being a good person, then we will want to follow Rousseau in giving support to procedures by which this ability is taught. Much of this will and should be done privately, in families. But every society employs and teaches ideals of the citizen, and of good civic judgment, in many ways; and there are some concrete practical strategies that will in fact support an education in compassion. (50)

Nussbaum believes that immersion in literature can assist with this learning. But I think she would agree with the idea that a close and honest reading of historians like Tim Snyder, Primo Levi, or Alexandr Solzhenitsyn can help with this form of moral development as well.

So several things seem clear. Compassion is crucial for recognizing the evil of the twentieth century; further, we can deepen our capacity for compassion by honestly confronting the atrocities of the period; and -- just possibly -- our future history will be better than our past because of this honesty. And Rousseau's comments about compassion in Emile suggest another possibility as well: that we become different people, and our culture becomes a different culture, through this kind of immersive experience.

"the topic of pity or compassion" I believe pity and compassion are not the same. Here's some interesting reasoning: https://download.uni-mainz.de/fb05-philosophie-schopenhauer/files/2019/02/1988_Cartwright.pdf