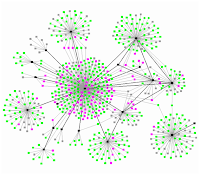 Quite a few researchers who study dynamic social processes are making use of some of the tools of network analysis. And it is sometimes maintained that this approach is inconsistent with an agent-centered approach to social processes. Some of these researchers take the view that "it's not what is in the heads of various actors, but rather their relationships in networks that provide the causal underpinnings of social change." And they sometimes maintain that the actor's psychological states can't even be identified in isolation from his/her social relationships. So, once again, explanation cannot rest upon facts about individuals alone. And this sort of finding is thought to cast doubt on methodological individualism in particular, and agent-centered explanatory strategies more generally. (Chuck Tilly and co-authors sometimes take a view along these lines; for example, Doug McAdam, Sidney Tarrow and Charles Tilly, Dynamics of Contention

There is something right about the intuition that we can't ground social explanations on assumptions that are too narrowly confined to features of individual psychology. Individuals are socially constucted and socially developed, and our explanations of social processes need
to reflect this fact. This is why I prefer the phrase "methodological localism" to "methodological individualism." But both ontologies are agent-centered. So the question remains: does the causal salience of social networks demonstrate that agent-centered accounts are inherently incomplete -- or even worse, inherently unworkable (because we can't even specify the individual agent's powers and motives independently of his/her networks)?

I don't think so, for several reasons. First, what is a network but a set of socially constructed agents in concrete relations with each other -- communication, coordination, power, subordination, and recognition? The facts about the network are exhausted by a description of the social beliefs of the relevant actors and their material relations to each other.

Second, it is certainly true that an agent's possibilities for exercising power are a function of facts beyond his/her own psychological characteristics. So Albert, the peasant activist in the tiny Breton village, is much more empowered than his psychological twin across the border in Normandy, by the fact that he alone has strong relationships with leaders in both the Catholic Church and the wine-growers' guild. His social networks permit him to amplify the scope of action and effect he may attempt. What this means is that Albert's social networks are a causal component in his ability to wield influence. In this sense it is reasonable as well to attribute causal status to the network and to characterize this standing as being independent of Albert as an individual.

But it remains true that all of the causal powers associated with the network depend on the states of agency of the many persons who make it up. We therefore need to be able to provide an agent-centered account of the network's causal powers, distributed over the many agents who make it up. We must have "microfoundations" for the claim that the network exercises social influence. If the actors who constitute nodes within the network didn't have the right mental frameworks, motivational dispositions, or bodies of knowledge, then they would not in fact behave in a way that was sustaining of the network's social-causal properties.

So, it seems inescapable that, when we say that "Albert's power as a peasant activist depends upon the social fact that he is part of such-and-so networks" -- that we have only uncovered another field of research where more agent-centered research is needed. The network's social-causal properties must themselves disaggregate onto a set of facts about the agents who constitute the network. The current causal properties of the network and the agents who make it up are the complex and iterative result of many inter-related actions and alliances of prior generations of agents.

And this in turn demonstrates that network analysis is by no means inconsistent with an agent-centered approach to social explanation.

(See "Levels of the social" for more on this subject.)

I had a brief exchange with a Semantic Web programmer about this entry. It's not deep (the point is that who individuals trust influences the shape of a network - or semantic web) but it might nudge a thought:

Me: Reading this post, I got to thinking about how network connections are determined in part by the types of entity connecting (some things join together better than others).

Which makes me think that leaving the individual out of the picture would be a mistake - you couldn't predict the network shape unless you took this into account.

Him: Yes, that is an interesting post. I think I can explain what it says in semantic web terms:

What you believe depends in part on what information you trust. You can think of all information in terms of graphs of relations.

Different agents will trust different information, hence inevitably their conclusions will be different even if they have access to the same information. In possible worlds terms, they disagree as to what the actual world really is.

The individual cannot be removed from the equation. In semantic web terms: triples are not enough, you aways end up with quads, or named graphs - or possible worlds.

Back to me: I could easily have misunderstood how extreme a point the likes of Chuck Tilly are making. If they are simply saying radical individualism makes for bad sociology - then they must be right.

A good deal of stuff happens because of the way information and entities are connected, and has little to do with the entities themselves (I am lead to believe that is what the Blogosphere and social networking sites are demonstrating).