Power and violence in China 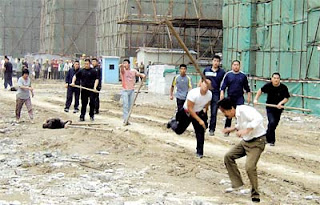 Several recent postings on this blog have focused on power. Ultimately power depends upon a threat of violence. And recent reports from China have thrown the spotlight on the use of violence against innocent citizens who are challenging one aspect of power or another. The photo at left is taken from a news story reporting the results of homeowners' protests in a Beijing neighborhood against unplanned buildings on the greenspace of their neighborhood. (Reportage and more photos are available here.)

What this incident reflects is a disturbing and apparently growing incidence of the use of violence by private security companies against groups of citizens in China who are engaging in a variety of efforts to protect their interests or advance their claims. These incidents of violence also occur at the hands of Chinese police -- for example, the beating death of a newspaper editor that was reported in an article in the New York Times a few years ago.

These reports are somewhat rare -- not because the behavior is rare, but because it is very difficult for journalists to do the sort of investigating and reporting that would be needed in order to uncover these outrages. (Remember Amartya Sen's theory that a free press in India is the best explanation of the absence of famine since Independence; think how different China's political scene would be with a practice of unfettered investigative journalism.)

But what these reports suggest is a very sober reality: that under current conditions in China, ordinary groups of Chinese people are subject to the imposition of serious violence if they come together to press their claims. There are reports of violence by paid thugs concerning migrant workers, factory workers, peasants subject to land confiscation, and ordinary poor people who have somehow gotten into conflict with the authorities.

What this also suggests is that the forging of an effective and binding legal order in China -- one that clearly articulates and defends the civil and individual rights of citizens that are valid even in circumstances of conflict between the powerful and the powerless -- creation of this legal order is a profoundly important goal for Chinese society. Only on the basis of these kinds of legal guarantees can civil society be an arena in which citizens and groups can advocate for their interests in a peaceful and progressive manner.
Posted by Dan Little at 10:23 PM