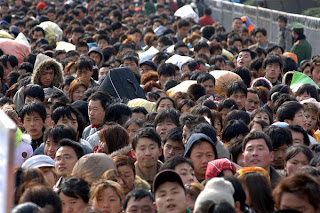 The challenge for Chinese sociology is the challenge of Chinese society. Chinese social sciences are presently in a period of deep uncertainty. Marxist ideas about method and theory are no longer governing, and new paradigms have not yet taken full form. This transition is especially important because of the magnitude and novelty of the social changes that China is experiencing today. Now is an important time for engagement between innovative Chinese and Western sociologists and philosophers in an effort to arrive at models of social research and explanation that work well for contemporary China.

Here is a brief inventory of some of the many social processes and challenges that are underway in China today, and that constitute an agenda of research for a distinctive China-centered sociology of the future.

Most visible among China’s current social changes is the economic transformation associated with market reforms in the past two decades. The reform of agriculture in the 1980s had massive effects that continue to reverberate in Chinese rural society. The reforms in the 1990s of the institutional setting of manufacture and international trade have created large currents and pressures in Chinese society: smashing of the brass rice bowl, stimulus to massive internal migration, creation of new ensembles of powerful players, creating of wealth, immiseration of some workers, …

Seen from a narrowly economic point of view, the question is this: How can China sustain 10% rates of economic growth? What further policy changes and institutional reforms will be necessary in order to both support and accommodate rapid economic growth?

Seen from the broader point of view, the question is: What are the social implications of this massive economic transformation? What changes have occurred within factories? How do workers reason about the choices they are faced with when privatization occurs? What is happening to displaced workers? What implications are emerging for public health, for the care of the elderly, or for access to education? What are the conditions of social well-being across China? How much inequality is resulting from these reforms, and how is it distributed across region and sector? How are these circumstances changing over time?

Something like 70% of China’s population is rural, with a sizeable percentage swinging back and forth between rural residence and low-paid urban work. The transformations that are underway in the countryside are very important. There is a profound readjustment of property rights underway, with a corresponding struggle between farmers and power-holders over ownership and control of land. The inequalities that have commonly existed between city and countryside are evidently more extreme than ever since 1949; incomes are rising rapidly in the urban manufacturing and service economy, and farmers’ incomes are stagnant. Western provinces such as Shaanxi continue to witness rural incomes in the range of $300 per year—the World Bank’s standard of extreme poverty. And farmers’ access to social services is very limited, including access to education; so opportunities for inter-generational improvement are much more limited than those presented to urban people.

Corresponding to some of these points about rural property ownership and inequalities, is a dramatic increase in the volume of rural protest and collective action. Tens of thousands of instances of collective protest and unrest occur every year in the countryside—and the incidence is rising. The state is concerned about conditions in the countryside; but its response is muted and confused. At some points the rhetoric of the state has been pro-farmer in the past few years; but there is also a “law and order” thread that offers the stick rather than social reform. Complicating the issue is the disconnect between the central government’s policies and the actions of local and provincial governments. The interests of the local and provincial governments are often tilted towards “development” and modernization – with corresponding lack of support for farmers’ rights. The central state appears to lack the ability to control the use of coercion by local authorities in putting down peasant collective action and protest.

A common cause of rural unrest is the fact of local corruption and abuse of the powers of local authorities. The study of corruption, and the institutions of state and market that might help to control corrupt practices, is an important subject for Chinese social scientists. Parallel to corruption is the question of the extension of the system of law. To what extent are players able to appeal to their rights and to gain access to processes of law enforcement? Are there emerging non-governmental organizations and other independent organizations that support workers’ and farmers’ rights? How can this institutional framework be extended and made more effective?

Internal migration and the status of ethnic minorities are other important subjects for study by Chinese social scientists. Once again, these are processes that are changing rapidly; it will be important for Chinese demographers, social policy analysts, and ethnographers to put together effective research programmes that will track and explore these processes.

The social behaviors that affect the environment and energy use, including changes in the volume of transportation and motor vehicles, present evident challenges for the future of Chinese society. Social scientists need to provide insight into the drivers of these behaviors, and social scientists can help to design social policies and institutions that might steer Chinese consumption patterns in directions that are more compatible with China’s longterm environmental sustainability.

Many Chinese intellectuals are posing questions about the role of values in Chinese society. Are there traditional Chinese values that might help secure a stable and harmonious future for Chinese society? Are there strategies or policies that might help to stabilize a social consensus about the legitimacy of governmental institutions and the distributive justice of China’s economic development? Social scientists can probe these questions at a variety of levels, asking the empirical question of the current distribution and variation of social values and the institutional question of the forces that influence future developments in social values.

Finally, the social challenges that will be posed by an aging Chinese population, in the context of a dramatically smaller cohort of younger workers as a result of the one-child policy, will be increasingly important in the coming two decades. Health care, income support, housing, and mental health services will all be important challenges for Chinese society, and once again, there is very little precedence for the magnitude of these challenges in other parts of the world.

Plainly, there is an urgent need for a new surge of effective social-science research in China. But equally, it is clear that these many areas of change represent a mix of different kinds of social processes and mechanisms, operating according to a variety of temporal frameworks, with different manifestations in different regions and sectors of Chinese society. So we should not expect that a single sociological framework, a unified sociological theory, or a unique sociological research methodology will suffice. Instead, Chinese sociological research needs to embrace a plurality of methods and theories in order to arrive at results that shed genuine light on China’s social development.
Posted by Dan Little at 10:06 AM