How much of social life can be explained? 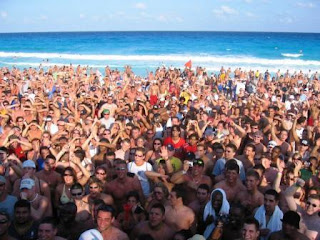 How much of social life can be explained?

It may sound like a strange question -- surely everything can be explained! And it's true that nothing that occurs is "inexplicable". But consider this homely example: if I spill my coffee on the desk, is there a scientific explanation of the particular shape that the splash of liquid takes? The final configuration of liquid on the desk is fully governed by physical laws and existing conditions; but chance and contingency play a critical role in the flow and splash of liquid as it moves into equilibrium. Some facts about the final equilibrium can be explained and predicted -- the flat surface and shallow depth, for example. But the particular configuration of the radiating arms of the spill is highly contingent. So we might say that the depth of the pool has a scientific explanation but the shape does not.

Now bring the focus back to the social. The social universe contains a great deal of stuff that is random, chaotic, and conjunctural. Social outcomes are path-dependent: later events often depend critically on circumstances that occurred earlier in time. And this means that outcomes may be decisively shaped by accidental and ideographic events that occurred in the past.

Take collective behavior. In analogy to the coffee spill, we might be in a position to explain the behavior of each person in a crowd -- and it may still be true that there is no explanation of the behavior of the group as a whole. (Maybe that is suggested by the beach crowd scene above.) Sometimes there is a salient explanation of group behavior, and sometimes there is not. And we might want to say that any social outcome that is random or depends primarily on a random concatenation of causes, cannot be explained but merely retraced. We can provide a narrative but not an explanation.

In fact, for a wide range of social phenomena, the outcome is simply the resultant of many small influences, and there is no salient reason for this particular outcome. There had to be some result, and the observed result is no more distinguished than any of the other possible outcomes. If the best causal story we can provide depends on unvarnished coincidence, then it seems reasonable to say that there is no explanation of this particular fact.

The most interesting social explanations arise when:

There is a large social trend or event that surprises us (change or unexpected persistence) and there is a previously unobserved factor that can be demonstrated to have caused the trend. Crudely, we might say that an outcome or pattern has an explanation just in case we have reason to believe there is a major causal factor that produces the pattern or outcome.

There appear to be a couple of pragmatic features to this question about whether something is amenable to scientific explanation. (This raises the question of the pragmatics of explanation in contrast to the logic of explanation.) First, it appears that there an implicature, in asking for an explanation of X, that X is unexpected. If so, there is an implication of contrast: contrary to the usual situations where X does not occur, X occurred on this instance. What caused X to occur? What factor in the situation led to the surprising outcome now? And second, there is the pragmatic preference for large and general factors rather than local and particular factors to serve as explanations.

So we might test out this idea: the proportion of social events that permit substantive scientific explanations is very low. Most social events are routine and expected, and they are the resultant of a large number of unimportant influences. And if either condition is present, then we might say that the event lacks an explanation.