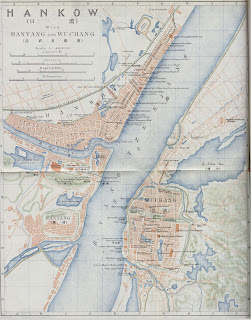 Two authors I've particularly admired in their analysis of cities -- at very different historical and spatial scales -- are G. William Skinner and Saskia Sassen. Skinner's historical treatment of Chinese cities is innovative and original (The City in Late Imperial China

and The Chinese City Between Two Worlds; both edited books, the first including two major essays by Skinner). And Sassen's treatment of the global city in the twenty-first century sets the standard for bold new thinking about the social processes that are transforming the contemporary world (The Global City: New York, London, Tokyo

Skinner is fascinated with the spatial arrangement of cities across historical China, and the hierarchies of economic, political, and social relationships that exist among them. And he is interested in the extended historical processes through which great and small cities took their shape. A crucial discovery -- regions rather than nations are the appropriate unit of analysis. "Fairly early in my research on Chinese cities it became clear that in late imperial times they formed not a single integrated urban system but several regional systems, each only tenuously connected with its neighbors" (CLIC 211). Transport systems were the primary integrative mechanism that Skinner identifies, and in China, transport was largely defined by navigable river systems.

In "Regional Urbanization in Nineteenth-Century China" Skinner is interested in explaining regional differences in urbanization rates across macroregions, and he isolates a handful of causal factors: population density of the region, division of labor, application of technology, commercialization/interregional trade, extraregional trade, administration. He finds that these variables do a pretty good job of explaining the urbanization rates for the eight macroregions he identifies (CLIC 235). A second interesting finding has to do with rank-size relationships of cities by region for late imperial China. Referring to a statistical regularity postulated by G. K. Zipf, according to which the rank-size distribution for a country or region is expected to be approximately linear when plotted with double-log scales, Skinner examines the rank-size distribution for the eight macroregions. And in a panel of graphs for the eight regions (CLIC 238-39) he demonstrates that the distributions conform remarkably well to this prediction, with a few interesting outliers (Canton, Kweiyang, Middle and Upper Yangtze regions).

Skinner's other essay in the volume is just as interesting, "Cities and the Hierarchy of Local Systems." In this paper Skinner focuses on the hierarchies within which Chinese cities fall -- one having to do with imperial administration and the other having to do with economic interaction. These hierarchies are both determined by the nature of the social interactions (and social functions) that are focused on various cities. And they are distinct. For the economic hierarchy of cities and towns Skinner's starting point is central place theory; according to this approach, cities and towns are ranked according to the volume of products and services that they provide and the nature of trade that exists between the city and other places in the hinterlands. The central analytical ideas here are "the demand threshold of the supplier and the range of a good" (277). These concepts work out, with appropriate simplifying assumptions, into a hexagonal array of places, containing nested hexagons of lesser places in a descending sequence. Skinner analyzes the location (spatial and hierarchy) of cities and towns in the Upper Yangzi region and finds that the analytical assumptions are born out.

The administrative hierarchy of cities is defined by different criteria -- location within the imperial system and a characteristic set of administrative functions. Skinner lays out this hierarchical system and then classifies cities and towns accordingly; and he finds, once again, a set of highly interesting regularities. In this case he finds that the distribution of administrative functions across cities and towns reflects intelligent administrative design. "These findings effectively dispose of the notion that cities in imperial China were but microcosms of empire, more or less uniform creations of an omnipotent state. Rather, they give evidence of skilled husbanding and deployment of the limited bureaucratic power that a premodern court could effectively control" (345). 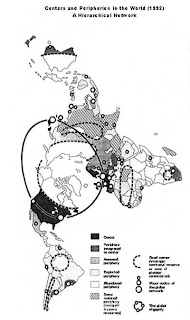 Now let's swing forward a century and look quickly at Saskia Sassen's analysis of global cities New York, London, and Tokyo). Sassen takes a different cut on the dynamics and structure of modern cities. She places the great cities of the late twentieth century into networks that are global rather than national or regional. She looks at networks of exchange that include financial transactions, information flows, and movements of expertise and knowledge-based services. And global cities are those cities that serve as dense hubs of these kinds of exchanges on a global basis. (The map at right doesn't come from Sassen, but it appeals to me in the context because it uses the connectedness of cities to rewrite the geography of the globe. See a ContinentalDrift posting for some discussion.)

Sassen singles out seven hypotheses (quoting from the preface to Global Cities):

And, in a single sentence, her conclusion is:

Economic globalization and telecommunications have contributed to produce a spatiality for the urban which pivots both on cross-border networks and on territorial locations with massive concentrations of resources (xxii).

The book attempts to document and explore these points through a huge range of evidence about flows: flows of investment, flows of telephone calls, flows of scientists and specialists. And global cities are the places where these flows concentrate and originate; they are nodes in the global system of exchange that constitutes the modern knowledge-intensive economy. Like Skinner, she is very interested in networks and hierarchies; unlike Skinner, she doesn't seem particularly interested in spatial patterns (and their graphical expression, maps).

These points just scratch the surface of the insights that these two social scientists have provided as we try to understand cities in relation to larger social networks. But perhaps it's enough to illustrate the crucial point: there is ample room in social science and history for innovative perspectives on old questions.