Realism for the social sciences? 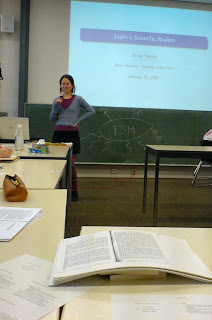 Scientific realism is the idea that scientific theories provide descriptions of the world that are approximately true. This view implies a correspondence theory of truth -- the idea that the world is separate from the concepts that we use to describe it. And it implies some sort of theory of scientific rationality -- a theory of the grounds that we have for believing or accepting the findings of a given area of science. (See a brief article on the basics of scientific realism including some useful references here.) Realism, objectivity, and facts go together. We can interpret a theory realistically just in case we believe that there is a fact of the matter concerning the assertions contained in the theory. (See earlier postings relevant to this topic, Concepts and the World and Social Construction.)

Realism raises all kinds of interesting questions when we consider applying it to the social sciences. For one thing, it requires a useable distinction between the world and the knower. This raises the question: is there an objective social world independent from the perceptions and concepts of observers? And this also is a complicated question, because the persons who make up social processes at the micro-level are themselves "knowers" of the social world. So there is a question about the objectivity of the social world and a corresponding question about social construction of social reality. If all social phenomena are socially constructed, then how can it be the case that some statements about social phenomena are objective and independent from the conceptual schemes of the observer?

Scientific realism got its impetus from the fact that physical theories invoke theoretical concepts that are not themselves directly observational -- muon, gravity wave, gene (at an early stage of biology). So the question arose, what is the status of the reference and truth of scientific sentences that include non-observational concepts -- for example, "muons have a negative electric charge and a spin of -1/2"? Since we can't directly inspect muons and measure their charge and spin, sentences like this depend for their empirical confirmation on their logical relationships to larger bits of physical theory -- and ultimately upon a measure of the overall degree to which this physical theory issues true experimental and observational predictions. And the empirical confirmation of the theory as a whole, the story goes, provides a rational basis for assigning a reference and truth value to its constituent sentences. So the fact that "muon" is embedded within a mathematical theory of subatomic reality and the theory is well confirmed by experimental means, gives us reason to believe that muons exist and possess approximately the characteristics attributed to them by muon theory.

But all of this has to do with esoteric physical theory. Is there any relevant application of realism in the social sciences? Here's one important difference: the social sciences are barely "theoretical" at all in the sense associated with the natural sciences. The concepts that play central roles in social theories -- charisma, bureaucratic state, class, power -- aren't exactly "theoretical" in the sense of being non-observational. And social concepts aren't defined implicitly, in terms of the role that they play in an extended formal theoretical structure. Rather, we can give a pretty good definition of social concepts in terms of behavior and common-sense attributes of social entities. In the social sciences we don't find the conceptual holism that Duhem and Quine attributed to the natural sciences (Pierre Duhem, The Aim and Structure of Physical Theory; W. V. O. Quine, Word and Object). Instead, both meaning and confirmation can proceed piecemeal. So if realism were primarily a doctrine about the interpretation of theoretical terms, there wouldn't be much need for it in the social sciences.

But here are several specific ways in which scientific realism is useful in the social sciences, I think. And they all have to do with the kinds of statements in the social sciences that we think can be interpreted as expressing facts about the world, independent of our theories and concepts.

Causal realism. We can be realist about the meaning of assertions about causation and causal mechanisms. We can take the position that there is a fact of the matter as to whether X caused Y in the circumstances, and we can assert the objective reality of social causal mechanisms. On the realist interpretation, social causal mechanisms exist in the social world -- they are not simply constructs of the observer's conceptual scheme. And the statement that "Q is the process through which X causes Y" makes a purportedly objective and observer-independent claim about Q; it is an objective social process, and it conveys causation from X to Y. Q is the causal mechanism underlying the causal relationship between X and Y.

Structure realism. We can be realist about the existence of extended social entities and structures -- for example, "the working class," "the American Congress," "the movement for racial equality." These social entities and structures have some curious ontological characteristics -- it is difficult to draw boundaries between members of the working class and the artisan class, so the distinctness of the respective classes is at risk; institutions like the Congress change over time; a social movement may be characterized in multiple and sometimes incompatible ways; and social entities don't fall into "kinds" that are uniform across settings. But surely it is compelling to judge that the Civil Rights movement was an objective fact in the 1960s or that the Congress exists and is a partisan environment. And this is a version of social realism.

Social-relations realism. If we say that "Pierre is actively involved in a network of retired French military officers", we refer to a set of social relations encapsulated under the concept of a social network and composed of many pair-wise social relations. Here too we can take the perspective of social realism. It seems unproblematic to postulate the objective reality of both the pair-wise social relations and the aggregate network that these constitute. Each level of social relationship can be investigated empirically (we can discover that Pierre has regular interactions with Jean but not with Claude), and it seems unproblematic to judge that there is a fact of the matter about the existence and properties of the network -- independent of the assumptions and concepts of the observer.

Meaning realism. Now, how about the hardest case: meanings and the objectivity of interpretation. Can we say that there is ever a fact of the matter about the interpretation of an action or thought? When Thaksin offends Charat by exposing the bottoms of his feet to him -- can we say that "Charat's angry reaction is the result of the meaning of this insulting gesture in Thai culture"? Even here, it is credible to me that there is a basis for saying that this judgment expresses an objective fact (even if it is a fact about subjective experience); and therefore, we can interpret this sentence along realist lines: "Thaksin's gesture was objectively offensive to Charat in the setting of Thai culture." It is evident that many of our interpretations of behavior and action are substantially underdetermined by context and evidence; so it may be that much interpretation of meaning does not constitute a "fact of the matter." But this seems to be a fact about particular judgments rather than a universal feature of the interpretation of meanings.

So it seems that it is feasible and useful to take a social realist perspective on many of the assertions and theories of the social sciences; and what this says, is that we can interpret social science statements as being approximately true of a domain of social phenomena that have objective properties (i.e. properties that are independent from our conceptualization of them).
Posted by Dan Little at 9:53 PM

Hope you are well. This is a really useful post. I am getting ready to teach the basic "scope & methods" course in our grad program in the fall. and this sis just the sort of basic dissection of what is at issue that students, especially student in programs that place a premium on technical competence, need. Thanks. Jim Johnson

(First year Uni student and the prescribed textbooks are contradicting each other!)