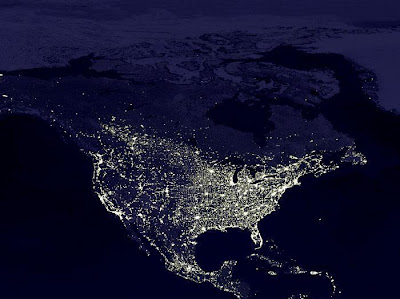 Chicago, Milwaukee, and Detroit are part of a large economic region in the upper Midwest of the United States, which is sometimes referred to as the Great Lakes Region. There are hundreds of lesser cities within this regional system -- Erie, Toledo, Rockford, Grand Rapids, .... What are the economic interdependencies that exist among these cities? How important are these relationships in the overall pattern of economic development that each city demonstrates? And of critical practical importance, how much leverage exists for development planners in these major cities to enhance their city's progress through adroit use of these relationships? Is there a possible gain for Milwaukee in virtue of the net effect of its relationships to Detroit? Or is each metropolitan region mostly autarkic with respect to the other?

There seem to be several theoretical possibilities. One is that there are in fact major point-to-point economic interdependencies among cities within a large economic region and that these are significantly different across different pairs of cities. It might be that the growth or contraction of auto manufacturing in Detroit is tightly enough linked to supplier companies in Milwaukee that what helps Detroit also helps Milwaukee.

Another possibility is that the regional impact is systemic rather than point-to-point. Here the idea is that the great metropolitan regions within a regional economy contribute to the macroeconomic environment for the region -- labor demand, growth, consumer demand, and fiscal shares. The region sets the basic parameters -- transport cost, commodity prices, and the current distribution of population and talent. But the impact of, say, Milwaukee on Toledo is entirely mediated through the macroeconomic environment of the region. And to the extent that there are correlations of advance and decline, this is the result of regional "pulsing" of macroeconomic factors rather than specific city-to-city interactions.

A third possibility is that each metropolitan region is largely independent within the larger region, so that regional economic performance is simply the aggregation of the performance of the component metropolitan regions (cities). And if this is the case, then we would expect a low degree of correlation on economic development across the cities of a region. (But in this case it is more difficult to explain why we refer to the set of cities as an economic "region" at all, since this term implies a degree of economic similarity and interdependence.)

Let's look at the first possibility more closely. Logically, the possibility of this kind of interdependency appears to depend on the existence of directed flows of activities between the places that do not extend to other places. There must be some network reality to the region within which A and B are proximate nodes. What else could provide the mechanism of mutual causal influence upon which the postulated interdependence depends?

So what are the inter-city connections that might support tight point-to-point linkages? The direct industry-to-industry dependencies mentioned above are most obvious. More furniture manufacturing in Grand Rapids might stimulate a surge in business for the plastic mesh producers in Rockford, to complete those great Aeron chairs. The input-output tables measuring exchange activity between the two cities might be extensive or minimal.

Here is another possible connection -- the talent needs in some cities might lead to the growth of universities in cities in other parts of the region. In a hypothetical history of the Midwest, Chicago might extend its current concentration of research universities and become a "knowledge center" for the region, supplying the inventors, architects, accountants, and lawyers for the region. In fact, specialized education and research is more diffused than this; but isn't this essentially the role that Boston played for a century or so for the northeast?

A third possibility -- two cities might be tightly linked through the existence of particularly efficient transportation or communication systems between them. Are Seattle and San Francisco more tightly linked economically because they are both Pacific Ocean ports with low-cost transport between them? What about Minneapolis, St. Louis, and New Orleans, linked by the barges of the Mississippi River?

Historically there are fairly good measures of economic interconnectedness between places. We can examine the correlation of time series of prices, wages, and profits to measure the degree of economic integration that exists among A, B, and C. Likewise, we can examine the patterns of growth or contraction of employment over time; do Milwaukee, Toledo, and Detroit demonstrate synchronized patterns of growth and contraction in business activity and overall employment over long periods of time? And the transport links mentioned here are a particularly fundamental source of economic integration in 19th-century studies of China, France, or the United States. (It's possible that contemporary data would suggest that all U.S. cities are equally integrated by these measures, since market integration has increased dramatically through transport and communications improvements.)

The most compact basis for studies of regional integration derives from the original insights of central place theory -- William Cronon's analysis of Chicago and its hinterlands, Nature's Metropolis: Chicago and the Great West

, is an outstanding example of this approach. And G. William Skinner's analysis of the urban hierarchies of late imperial China falls in this general approach. What these examples do not permit, though, is analysis of inter-city dependencies across a region. At a very different level, these are the kinds of questions Saskia Sassen is asking about "world" cities. She attempts to identify the linkages that exist among major cities with respect to financial flows, internet traffic, and telephone calls. See earlier posts on each of these approaches (post, post, post).
Posted by Dan Little at 12:01 AM

Here is an interesting example of how transportation innovation has determined where development occurs: before the invention of the steamboat, shipping could only be conducted downstream. Wooden ships were cut up after they reached their destination point and used for lumber. The steamboat allowed down-river cities to not only accept imports, but also to export; this uprooted the economic advantages up-stream cities had and pulled them towards the coast. Trade between cities became centralized in port cities. This trend has only intensified with the advent of containerization.