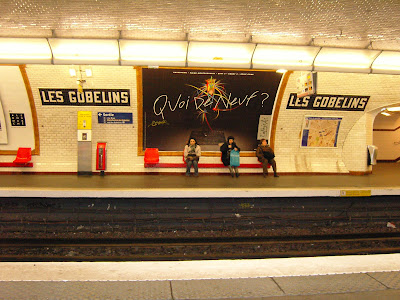 What might be involved in creating a new sociology of Paris? Paris is a particularly good subject for a new urban sociology. It is a gritty, diverse, and dynamic city, and a city displaying unceasing chaotic surges and currents of social life. It is a global city, both in Saskia Sassen's sense (strong networked interconnection with other global cities) and in the sense of being a magnet for immigrants from every part of the world. It is an intellectual city, a conflictual city, a city with continuous poverty and deprivation, as well as conspicuous wealth, and a city with high unemployment and aggressive policing. And it is a city with ubiquitous transit (dozens of lines serving hundreds of stations), implying thorough urban mobility; but also invisible boundaries marking the edges of the social circuits of various social and ethnic groups.

If we were beginning anew, we might start with the racial and ethnic diversity the city contains and the circuits of social life that these many groups traverse. Ride the RER from Chatelet to Charles de Gaulle and you may get an impression of a great salad spinner of humanity -- everyone all mixed up on one long subway carriage. But this impression is probably mistaken -- Didier Lapeyronnie's analysis of the French ghetto puts stop to that thought (post) and highlights the very sharp separations that exist between immigrant neighborhoods and the rest of French cities. So a sociology of Paris needs to uncover the distinct social worlds it encompasses.

And we would want to map the terrain of poverty and deprivation in Paris. Who are the poor? How is poverty caused and reproduced in Paris? What groups are most likely to be homeless and hungry (SDF -- sans domicile fixe)? And how large a factor does immigration play in this question? Recall the deadly fires several years ago in Paris -- these were temporary housing facilities for homeless immigrants (story). A recent collaboration among sociologists and journalists picks up this thread in La France invisible. The creators of the project have undertaken to give voice to the many categories of poor and disempowered people in France: accidentés au travail, banlieusards, délocalisés, discriminés, disparus, dissimulés, drogués, ... These short pieces provide thumbnail descriptions of the circumstances of life of the people involved in these categories, often incorporating an interview or two. The hope here is to give a visceral glimpse to the reader of the life difficulties involved in these (alphabetically organized) categories.

A related subject for a new descriptive sociology of Paris has to do with the patterns of public health that the city embodies. What sorts of health disparities exist across different social groups? How are these differentials patterned socially across the city itself? Here is a very brief discussion of the issue of health disparities in France, presented at the "Congrès national des Observatoires régionaux de la santé 2008 - Les inégalités de santé" in Marseille, 16-17 octobre 2008. But this report is very brief and is not city- or region-specific. By contrast, a central focus of public health research in the U.S. is on the patterns of health disparities that can be found in cities such as Detroit, Chicago, or New York, often accompanied by detailed social mapping of the results.

And what about employment and education? What are the mechanisms through which education, social position, age, race, and ethnicity play out across social groups to create the specific patterns of employment opportunity that Paris presents? Jobs and education are highly volatile issues everywhere in France today -- witness the current waves of strikes and demonstrations about unemployment and education reform. What are the social mechanisms underlying these systems? (Pierre Bourdieu and Jean-Claude Passeron addressed the social class aspects of the French educational system in Les héritiers (1964).) To what extent do the concrete institutions of training, education, and job recruitment work to reproduce significant inequalities across social groups?

Social mapping analysis would help in each of these areas. GIS maps of the city demonstrating the spatial distribution of poverty, crime, bad schools, police brutality, and 2-1-1 calls would tell us a lot about the social geography of the city. It would be enormously interesting to be able to have access to an interactive map of the city, combining many social variables of interest. In fact, that social map would help make sense of the long RER ride mentioned above. As you pass through neighborhoods ranging from affluent to graffiti-inscribed banlieue, you would be able to make the connection to some of the social realities that underlie these glimpses. Surprisingly, though, these sorts of spatial analyses and maps don't seem to exist yet for Paris or other French cities -- or at least, they are not easily located on the web. Is this a specific feature of the French sociological discourse -- with French researchers perhaps more attuned to discursive theory and less to spatial analysis and empirical study?

One might paraphrase the point here as saying that Paris deserves what Chicago received in the 1920s through 1940s in the form of the "Chicago School of Sociology" -- a focused, empirically rigorous, analytically astute series of efforts to come to grips with the complex social realities of the city, and to provide a better diagnosis of the social problems of the city in a way that supports more effective social policy. It's possible that this type of approach already exists within some of the social science research institutes of French universities. If so, I hope that readers will point us in the right direction.

(Michel Pinçon and Monique Pinçon-Charlot have a recent book on the sociology of Paris. Here is an interview with Michel Pinçon in LeJournalduNet on the subject of the wealthy class in France and an interview on the "bourgeoisification" of Paris. And Céline Béraud and Baptiste Coulmont offer a very good account of the recent development of French sociology in Les courants contemporains de la sociologie. Baptiste Coulmont maintains an interesting academic website and blog here.)
Posted by Dan Little at 8:19 AM

Thanks for mentioning the book I wrote with Céline Béraud !