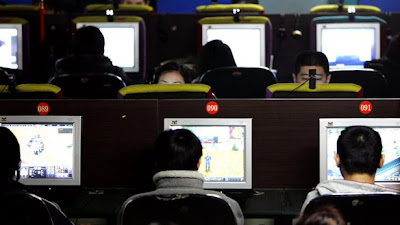 Guobin Yang's The Power of the Internet in China: Citizen Activism Online

is a boundary-breaking book. It is a sociology of the communities who use the internet in China; it is a contribution to the study of social movements; it is a history of a recent period of China's modern history during which internet activism became important; it is an ethnography of the wangmin -- "netizens"; and it is a snap review of some of the hottest issues in front of the Chinese public today -- environmental problems, corruption, exploitation of factory workers, abuse of power, and social inequalities. Much more than in North America or Western Europe, the internet functions as a location of social activism in China, according to Yang. And it serves an enormous audience; China's internet population is staggeringly large. Yang estimates that by June 2008 "the number of internet users had reached 253 million" (2). He indicates that surveys find that online activists are mostly young and urban, but reflecting diversity in age and occupation (32). And Yang refers to a highly heterogeneous set of internet constituencies that include "homeowners, pensioners, migrants, hepatitis-B carriers, ant farmers, consumers, even computer gamers and pet owners" (27).

Yang puts his view of the role that internet activism is playing in China in these terms:

Analyzing online activism will both reveal the new forms, dynamics, and consequences of popular contention in the age of the Internet and will shed light on general patterns and dynamics of change in contemporary China. I show how Chinese people have created a world of carnival, community, and contention in and through cyberspace and how in this process they have transformed personhood, society, and politics. This book is about people's power in the Internet age. (1)

So what is the significance of the online presence of China's internet users? Does the internet represent a new tool for organizing and expressing grievances? Is it simply "performative" -- a space where feelings and reactions can be more safely aired than in physical spaces? Yang takes the view that the activism expressed on the internet is "active" -- it is engaged, it leads to groups having stronger affinities with each other, and it can lead to a different kind of politics and democracy in the world of factories, officials, corporations, and homeowners. And in the 1990s and 2000s, these forms of collective action are more likely to be non-confrontational than was true in the mobilization leading up to 1989.

It is challenging to conceptualize the concept of "internet activism." Is it simply a communications technology? Is it a backbone of copper and fiber through which hundreds of millions of Chinese people can interact for large purposes and small? How does the social reality of "internet society" relate to our traditional categories of "government," "economy," "culture," "religion," etc.? Yang describes his theoretical approach as "multi-interactionism," by which he means that internet activism develops in dynamic relationship to a handful of separate social factors that facilitate and constrain the actions users can take. He refers to state power, culture, the market, civil society, and transnationalism (7) as the large contextual factors that bound the social reality of the internet; and he argues that the creative and innovative users adapt flexible strategies for dealing with each in interaction. (He attributes this view to the interactionalist approach to contention taken by Tilly, McAdam, and others.)

A question that inevitably arises when we think about the internet in China is the issue of technology censorship. How important and effective are the Chinese state's efforts to regulate and control the internet? Does the "great firewall" actually put a significant brake on the forms of expression and mobilization that can occur in cyberspace? James Fallows gave an assessment of the overall effectiveness of censorship in 2008 in the Atlantic (link); his view there is that the state's aim is largely to make "subversive" uses of the internet more trouble than they are worth. Is this a fair assessment? Yang too suggests that the state's efforts at censorship are fairly ineffective, writing that "state power constrains the forms and issues of contention, but instead of preventing it from happening, it forces activists to be more creative and artful" (7). This tends to support the idea that the advantage still lies with the user; and yet it seems clear that the state is devoting a very large amount of resources to the effort. Yang describes the situation this way:

An entire apparatus of institutions and practices have appeared for the control of the Internet. Under these conditions, Internet activists have three ways of negotiating political control: rightful resistance, artful contention, and digital "hidden transcripts" of the information age. The main issues in online activism reflect both the political constraints on contention and the social milieu of activism. (23)

Yang describes the institutions and rules that the government has created to control internet activism in some detail (47-53). And he argues that the Chinese state is aware of a fundamental contemporary reality: a relatively free access to the information superhighway is a critical component of economic success. So control and economic innovation are in conflict, and so far users have been successful in finding ways of expressing themselves and gaining access to ideas and information from others.

What sorts of issues have created strong responses from online activists? There are many examples of websites and campaigns that are stimulated as protests against injustice -- police beatings and killings, bad treatment of workers or homeowners, etc. And there are many instances of campaigns that have to do with assertions of group identity and rights -- for example, the hepatitis-B carriers or diabetes patients. So social protest and identity expression are key. But here is a more extensive list of issue areas that Yang identifies within online activism: popular nationalism; rights defense; corruption and power abuse; environment; cultural contention; muckraking; and online charity (55). And within the category of rights defense he lists: vulnerable persons, homeowners, forced relocation, hepatitis-B carriers and diabetes patients, consumer rights, human rights, and other issues of urban middle-class concern (56). (Many of these issues about rights are the same subjects that Kevin O'Brien identifies under the heading of "rightful protest"; Rightful Resistance in Rural China

We might close by asking what effects "internet activism" is likely to have in China. And after reading Guobin Yang's book, we might offer a best guess that goes along these lines. The internet serves as a large, dynamic space of expression and contention, that plays a critically important role in shaping Chinese people's political and social attitudes. Its importance is less as an instrument of political organization and mobilization, than as a decentralized medium of consciousness formation. The anger and sorrow that is expressed over a single wrongful death -- repeated tens of thousands of times in a variety of forums and forms -- can also produce a stronger sense of a need for change in China. And so the effects of internet activism are somewhat unpredictable. But we might speculate that it can lead in the end to powerful and popular demands in earthly China for important legal and institutional reforms. Perhaps Charter '08 will be the big winner (link): legal protections and a broadened scope for life within civil society.
Posted by Dan Little at 7:45 PM

Thanks for the update. I sure will read this book.
However, in the short term, I am not so sure about all the opptimistic prediction about the future. we have the coordinate the internet phenominom in China in the context of authotarian state and party lead military.
In the long term, who knows, the SU collapsed in a matter of days.

Responsible internet use should be observed in any countries. Internet activism is good as long as they exercise their full rights correctly.