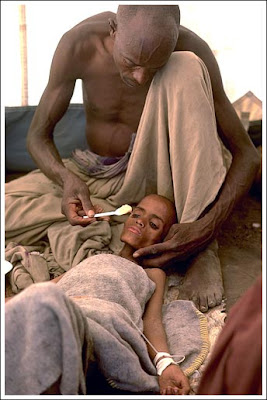 Food security is a crucial aspect of life, both for a population and a household. By "food security" specialists often mean two different things: the capacity of a typical poor household to secure sufficient food over a twelve-month period (through farm work, day labor, government entitlements, etc.); and the capacity of a poor country to satisfy the food needs of its whole population (through direct production, foreign trade, and food stocks). This involves both food availability and the ability to gain access to food (through entitlements).

A representative description of food security is offered by Shlomo Reutlinger in Malnutrition and Poverty: Magnitude and Policy Options


Food security ... is defined here as access by all people at all times to enough food for an active, healthy life. Its essential elements are the availability of food and the ability to acquire it. Conversely, food insecurity is the lack of access to sufficient food and can be either chronic or transitory.  Chronic food insecurity is a continuously inadequate diet resulting from the lack of resources to produce or acquire food.  Transitory food insecurity, however, is a temporary decline in a household’s access to enough food.  It results from instability in food production and prices or in household incomes.  The worst form of transitory food insecurity is famine.


Here is how Sen formulates his "capabilities" understanding (developed, for example, in Hunger and Public Action


The standard of adequacy is best understood functionally: a person, household, or population has food security if it has sufficient access to food to permit full, robust human development and realization of human capacities.


There is an obvious connection between the two definitions at the household and country levels; but from a human point of view it seems more useful to focus on household food security rather than national food security.  A country may in principle have more than sufficient resources to satisfy the food needs of its population, but fail to do so because of internal inequalities.  Thus achieving household food security in the less‑developed world requires both equity and growth.  Amartya Sen and Jean Dreze have made major contributions on hunger and famine in the developing world, and their work can almost always be linked back to the household level.  Here is a good source on their writings: The Amartya Sen and Jean Dreze Omnibus: (comprising) Poverty and Famines; Hunger and Public Action; India: Economic Development and Social Opportunity

Michael Lipton has also been an important voice on this set of topics.  His central task in Poverty, Undernutrition, and Hunger

is an attempt to provide criteria for distinguishing between the poor and the ultra-poor.  The ultra-poor have incomes and entitlements that are absolutely below that required to gain access to 80% of 1973 FAO/WHO caloric requirements.  Below this level is likely to lead to undernutrition (the failure of food security).  Lipton constructs a "food adequacy standard" as a way of measuring the incidence in a given country of absolute poverty.  Here is his statement of a food adequacy standard:


Food security can be put at risk in a variety of ways. Natural conditions can lead to a shortfall of grain production -- flood, drought, or other natural disasters can reduce or destroy the crop across a wide region, leading to a shortfall of supply. Population increase can gradually reduce the grain-to-population ratio to the point where nutrition falls below the minimum required by the population or household. And, perhaps most importantly, prices can shift rapidly in the market for staple foods, leaving poor families without the ability to purchase a sufficient supply to assure the nutritional minimum. It is this aspect of the system that Amartya Sen highlights in his study of famine (Poverty and Famines: An Essay on Entitlement and Deprivation). And it is the circumstance that is most urgent in developing countries today in face of the steep and rapid rise in grain prices over the past year.

The results of a failure of food security are dire. Chronic malnutrition, sustained over months and years, has drastic effects on the health status of a population. Infant and child mortality increases sharply. Often the gender differences in health and mortality statistics widen. And economic productivity falls, as working families lack the strength and energy needed to labor productively. Famine is a more acute circumstance that arises when food shortfalls begin to result in widespread deaths in a region. The Great Bengal famine, the Ethiopian famine, the Great Leap Forward famine, and the famines in North Korea offer vivid and terrible examples of hunger in the twentieth century.

So what is needed to maintain food security in a poor nation? Some developing countries have aimed at food self-sufficiency -- to enact policies in agriculture that assure that the country will produce enough staples to feed its population. Other countries have relied on a strategy of purchasing large amounts of staple foods on international markets. Here the strategy is to generate enough national income through exported manufactured goods to be able to purchase the internationally traded grain. This is the strategy recommended by neoliberal trade theory. If agriculture is a low value-added industry and the manufacture of electronic components is high value-added, neoliberals reason, then surely it makes sense for the country to generate the larger volume of income through the latter and purchase food with the proceeds.

This logic has given rise to several important problems, however. First is the vulnerability it creates for the nation in face of sharp price shocks. This is what we have seen in many countries over the past year. And the second is the reality of extensive income inequalities in most developing countries -- with the result that the "gains of trade" may not be sufficiently shared in the incomes of the poorest 40% to permit them to maintain household food security.

These considerations suggest the wisdom for developing countries to expend more resources on agricultural development (which often has an income-inequality narrowing effect) and a greater emphasis on national and regional food self-sufficiency.

I hate internal inequalities, it basically means that there are too many greed ppl.

A country may in principle have more than sufficient resources to satisfy the food needs of its population, but fail to do so because of internal inequalities.