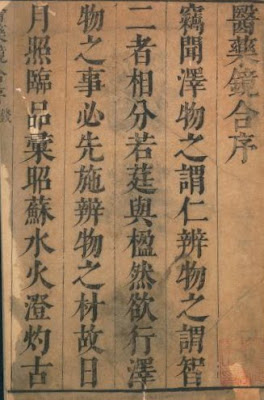 It is a commonplace in world history to observe that China had achieved a high level of sophistication in science, medicine, and astronomy by the Middle Ages, but that some unknown feature of social organization or culture blocked the further development of this science into the expansion of technology in the early modern period. Chinese culture was "blocked" from making significant technological advances during the late Ming and early Qing periods -- in spite of its scientific advantage over the West in medieval times; or so it is believed in a standard version of Chinese economic history.

A variety of hypotheses have been offered to account for this supposed fact. For example, Mark Elvin argues that China's social and demographic system created conditions for a "high-level equilibrium trap" in the early modern period in The Pattern of the Chinese Past

. According to Elvin, Chinese social arrangements favored population growth; innovative and resourceful farmers discovered all feasible refinements of traditional agricultural techniques to refine a highly labor-intensive system of agriculture; and population expanded to the point where the whole population was at roughly the subsistence level while consuming virtually the whole of the agricultural product. There was consequently no social surplus that might have been used to invest in discovery of major innovations in agricultural technology; so the civilization was trapped. (Here is a more developed discussion of Elvin's argument.)

Other historians have speculated about potential features of Confucian culture that might have blocked the transition from scientific knowledge to technology applications. The leading Western expert on Chinese science is Joseph Needham (1900-1995), whose multi-volume studies on Chinese science set the standard in this area (Science and Civilisation in China. Volume 1: Introductory Orientations

; Clerks and Craftsmen in China and the West

). And Needham attributes China's failure to continue to make scientific progress to features of its traditional culture.

But here is a more fundamental question: is the received wisdom in fact true? Was Chinese technology unusually stagnant during the early-modern period (late Ming, early Qing)? Agriculture is a particularly important aspect of traditional economic life; so we might reformulate our question a bit more specifically: what was the status of agricultural technology in the seventeenth and eighteenth centuries (late Ming, early Qing)? (See an earlier posting on Chinese agricultural history for more on this subject.) 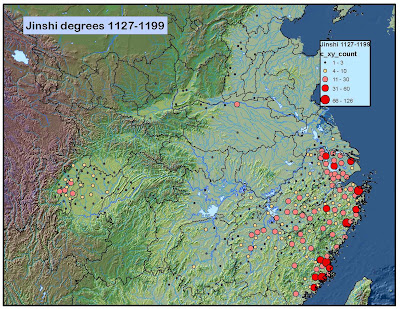 Economic historian Bozhong Li considers this question with respect to the agriculture of the lower Yangzi Delta in Agricultural Development in Jiangnan, 1620-1850

. And since this was the most important agricultural region in China for centuries, his findings are important. (It was also the major cultural center of China; see the concentration of literati in the map above.) Li makes an important point about technological innovation by distinguishing between invention and dissemination. An important innovation may be discovered in one time period but only adopted and disseminated over a wide territory much later. And the economic effects of the innovation only take hold when there is broad dissemination. This was true for Chinese agriculture during the Ming period, according to Li:

The revolutionary advance in Jiangnan rice agriculture technology appeared in the late Tang and led to the emergence and development of intensive agriculture composed of double-cropping rice and wheat. But this kind of intensive agriculture in pre-Ming times was largely limited to the high-fields of western Jiangnan. In the Ming this pattern developed into what Kitada has called the 'new double-cropping system' and spread throughout Jiangnan, but only in the late Ming did it become a leading crop regime. Similar were the development and spread of mulberry and cotton farming technologies, though they were limited to particular areas and cotton technology's advances came later because cotton was introduced later. Each had its major advances in the Ming. Therefore, technology advances in Ming Jiangnan agriculture were certainly not inferior to those of Song times which are looked at as a period of 'farming revolution'. (40)

Li also finds that there was a significant increase in the number of crop varieties in the early Qing -- another indication of technological development. He observes, "The later the date, the greater the number of varieties. For example, in the two prefectures of Suzhou and Changzhou, 46 varieties were found in the Song, but the number rose to 118 in the Ming and 259 in the Qing" (40). And this proliferation of varieties permitted farmers to adjust their crop to local soil, water, and climate conditions -- thus increasing the output of the crop per unit of land. Moreover, formal knowledge of the properties of the main varieties increased from Ming to Qing periods; "By the mid-Qing, the concept of 'early' rice had become clear and exact, and knowledge of 'intermediate' and 'late' strains had also deepened" (42). This knowledge is important, because it indicates an ability to codify the match between the variety to the local farming environment.

Another important process of technology change in agriculture had to do with fertilizer use. Here again Li finds that there was significant enhancement, discovery, and dissemination of new uses of fertilizer in the Ming-Qing period.

A great advance in fertilizer use took place in Jiangnan during the early and mid-Qing, an advance so significant that it can be called a 'fertilizer revolution'. The advance included three aspects: (a) an improvement in fertilizer application techniques, centring on the use of top dressing; (b) progress in the processing of traditional fertilizer; and (c) an introduction of a new kind of fertilizer, oilcake. Although all three advances began to appear in the Ming, they were not widespread until the Qing. (46)

And the discovery of oilcake was very important to the increases in land productivity that Qing agriculture witnessed -- thus permitting a constant or slightly rising standard of living during a period of some population increase.

There were also advances in the use of water resources. Raising fish in ponds, for example, became an important farming activity in the late Ming period, and pond fish became a widely commercialized product in the Qing. Li describes large-scale fishing operations in Lake Tai in Jiangnan using large fishing boats with six masts to catch and transport the fish (62).

So Li's estimate of agricultural technology during the Ming period is that it was not stagnant; rather, there was significant diffusion of new crops, rotation systems, and fertilizers that led to significant increases in agricultural product during the period. "In sum, in the Jiangnan plain, land and water resources were used more rationally and fully in the early and mid-Qing than they had been in the late Ming" (64).

Two points emerge from this discussion. First, Li's account does in fact succeed in documenting a variety of knowledge-based changes in agricultural practices and techniques that led to rising productivity during the Ming-Qing period in Jiangnan. So the stereotype of "stagnant Chinese technology" does not serve us well. Second, though, what Li does not find is what we might call "science-based" technology change: for example, the discovery of chemical fertilizer, controlled experiments in rice breeding, or the use of machinery in irrigation. The innovations that he describes appear to be a combination of local adaptation and diffusion of discoveries across a broad territory.

So perhaps the question posed at the start still remains: what stood in the way of development of empirical sciences like chemistry or mechanics that would have supported science-based technological innovations in the early modern period in China?
Posted by Dan Little at 1:12 PM

Could it have to do with social stratification, that whatever the so-called scientists of the time were doing, they were not interested in agriculture sufficiently to create significant improvements, like in machinery, etc. This gets back to the Confucian issues, perhaps. Actually, similar issues remain today, where rural China is starkly poor, backward and inefficient.

The topic is interesting and I know way to little. My questions are if during this time the economic systems were feudal or guild base or something else?

The feudal system included a responsibility for the feudal lord to keep all the serfs with work and food. In such a system it's really hard to get work surplus. The same goes for a guild system, where the guilds make sure that all tradesmen have enough work. There is no proper competition.

As far as I can see, to have an industrial revolution you must get rid both of feudal lords and guilds and tight market controls.

The chemical that drank lives…
Information Exchange..: Ban on Endosulfan
Endosulfan is an organochlorine insecticide. It plays a vital role in controlling the insects that harm the agricultural fields.