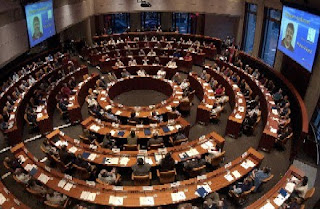 There is quite a bit of interest today in exploring better mechanisms for implementing the goals of democracy in more effective and broadly legitimate ways than most electoral democracies have succeeded in doing to date.  A core democratic goal is to create deliberation and decision mechanisms that permit citizens to become sufficiently educated about the issues that confront the polity that they can meaningfully deliberate about them, and to find decision-making processes that fairly and neutrally permit each citizen to contribute equally to the final outcome.

The deficiencies of current democratic processes are fairly visible around the television dial, the Internet, and the town-hall meeting and state house: demagogic leaders who deliberately whip up the most negative emotions in their followers, citizens who take almost no effort to learn the details of the issues, strident and verbally violent attacks against one's political adversaries, the excessive power possessed by economic interests to prevail through influence on agencies and legislators, and an overall lack of civility and trust within the polity.  (Many of these deficiencies are highlighted in an earlier post.) It is hard to see that the public's considered interests are the ultimate guide to our democratic actions. Some people are now referring to these flaws as the "democratic deficit" -- a set of structural flaws in existing democratic institutions that lead to disappointing results.

So how can we do better? There are several important kinds of experiments underway that seem to have a lot going for them, both in principle and in practice, and these generally fall within the category of experiments in "deliberative, participatory democracy." (Here is a link to an earlier post on some of these issues.)

Particularly interesting is an experiment undertaken a few years ago in British Columbia in Canada.  Following several elections that generated a great deal of popular complaint about the nature of the voting processes that led to the perverse outcomes, the Liberal Party pledged to create a "Citizens' Assembly for Electoral Reform" to consider the existing procedures and feasible alternatives and to recommend a single reform if warranted.  The LP came to power in the next election in 2000 and the government of British Columbia kept its pledge.  A citizens' assembly was created in 2004, composed of 160 citizens selected quasi-randomly from each of the province's districts. The body was asked to deliberate carefully about existing voting procedures and feasible alternatives, and to make a recommendation to be presented in a referendum to the voters of the province as a whole.  The deliberations of the assembly occurred over an eleven-month period.  They were supported by a professional staff and sufficient resources to conduct their work.  And in 2005 they duly issued a considered recommendation to be presented to the BC electorate.  This was the single transferable vote recommendation (STV). (The Wikipedia article on the "single transferable vote" system provides a good background on the Citizens' Assembly process as well; link.)

Here is a good video that describes the process in some detail; the full playlist is found here, and is worth watching in full:

This whole process was observed carefully by a team of social scientists at the Centre for the Study of Democratic Institutions at the University of British Columbia, and their assessment of the process is documented in Mark Warren and Hilary Pearse, eds., Designing Deliberative Democracy: The British Columbia Citizens' Assembly (Theories of Institutional Design)

. The book is a fascinating work in "experimental democracy." Here are the central questions posed by the researchers:
The summary conclusions are quite favorable to the process: citizen participants took their task seriously, they learned a great deal about different voting mechanisms, they debated the values that ought to guide selection of a mechanism, and they came to near-unanimity about the eventual recommendation -- a system of proportional representation referred to as "single transferable vote" (STV).  Briefly, it is a system in which voters are permitted to rank candidates, and their votes are passed on to lower-ranked choices once the first choice has received sufficient votes.  This permits minority groups to achieve representation when they would otherwise be entirely shut out of government.

Here is a summary statement about the CA process provided by the editors:


The authors of this volume are far from uncritical of the CA process.  But they lend strong support to the judgment that the CA represents the first time a democratic institution has been deliberately and relatively successfully designed to address a constitutional issue.  And if there is a broad lesson, it is that new democratic institutions can be successful if their design is closely related to broadly legitimate goals as well as to the specific characteristics of the issue at hand. (xii)

Another important empirical question is whether a group of citizens will succeed in educating themselves about a complex issue and arrive at well considered opinions that bring together their understanding of the relevant values they share and the facts of institutional design that can be discovered.  Here again, the CA example is a heartening one.  The authors of Designing Deliberative Democracy give ample evidence, based on ethnographic data, of the effectiveness of this forum in stimulating this kind of values reflection and learning that good decisions by a group of typical citizens require.  The process appears to have worked very well, even by the high standards of philosophical theories of deliberative democracy.  Habermas would be pleased!

What was the eventual result of this effort?  The proposal did not reach the 60% super-majority required for adoption, but it came close with about 57.7%. A second referendum was conducted in 2009, and the proposal failed again, gaining only 38.8%.  But in spite of electoral failure, the experiment appears to be a very important one, and one that other polities may well want to attempt to emulate.

It is deeply interesting to consider whether mechanisms like the citizens' assembly might help to repair the democratic deficit we experience in the United States.  Are there mechanisms that we can adopt at the local, regional, or national level that would permit us to arrive at a better understanding of complex issues, a better ability to find common ground with each other, and an ability to arrive at recommendations for public policies that are feasible and fair?  Could we address issues of healthcare reform, social security reform, financial regulation, budget planning, or environmental protection through mechanisms like this?  And would the result be something that we could all find to be superior to the current processes of legislation, referendum, and cable television rants?  The evidence of British Columbia suggests a favorable answer to all these questions.

(Another piece of research in this general vein is Archon Fung and Erik Olin Wright, Empowered Participation: Reinventing Urban Democracy