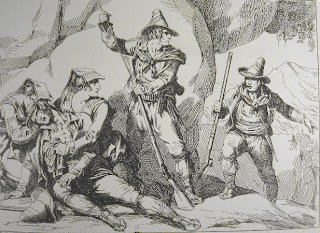 Chuck Tilly had a fascination with the mechanisms of social interaction at all levels.  His 2005 book, Trust and Rule, picks up on one particular feature of social organization that is often instrumental in political and social episodes, including especially in the everyday workings of predation and defense.  This is the idea of a trust network: a group of people connected by similar ties and interests whose "collective enterprise is at risk to the malfeasance, mistakes, and failures of individual members" (chapter 1, kindle loc 186). Here is a definition:


Trust networks, then, consist of ramified interpersonal connections, consisting mainly of strong ties, within which people set valued, consequential, long-term resources and enterprises at risk to the malfeasance, mistakes, or failures of others. (chapter 1, kindle loc 336)

A band of pirates, a group of tax resisters, or a village of non-conformists in a period of religious persecution fall in the category of trust networks.  The stakes are high for all participants.  On the other hand, the American Medical Association, the League of Women Voters, and the pickpockets who work the Gare St Lazare train station do not represent trust networks, though they have the properties of social action networks more generally.  There is little real risk for any particular physician even if other members of the AMA don't play their parts in a lobbying campaign.  The willingness of members of the extended group to commit their own actions to a risky common effort depends on their level of trust in other members -- trust that they will make their own contributions to the collective enterprise, and trust that they will not betray their comrades.  (French historian Marc Bloch belonged to a trust network, the French Resistance, that led to his death in 1944 by the Gestapo; link.)

The general idea is that there are numerous examples of networks of people who share substantial interests in common, and who have a high level of trust in one another that permits them to undertake risky joint activities.  Here is a more complete statement of Tilly's conception:


How will we recognize a trust network when we encounter or enter one?  First, we will notice a number of people who are connected, directly or indirectly, by similar ties; they form a network.  Second, we will see that the sheer existence of such a tie gives one member significant claims on the attention or aid of another; the network consists of strong ties.  Third, we will discover that members of the network are collectively carrying on major long-term enterprises such as procreation, long-distance trade, workers' mutual aid or practice of an underground religion.  Finally, we will learn that the configuration of ties within the network sets the collective enterprise at risk to the malfeasance, mistakes, and failures of individual members. (chapter 1, kindle loc 186)

Trust networks are particularly relevant in the context of efforts at violent extraction and domination -- both on the side of predators and prey.  Predators -- bandits, pirates, and gangs -- need to establish strong ties within their organizations in order to be able to effectively coerce their targets and to escape repression by others.  And prey -- farmers in ranch country, rural Jews in Poland, or home owners in central Newark -- are advantaged by the existence of strong ties of family, religion, or ethnicity through which they can maintain the collective strategies that provide some degree of protection.  But Tilly makes the interesting point that the workings of trust networks cross over both contentious and noncontentious activities.  Here is a general statement that frames much of Tilly's discussion in the book:


Noncontentious politics still make up the bulk of all political interaction, since it includes tax collection, census taking, military service, diffusion of political information, processing of government-mediated benefits, internal organizational activity of constituted political actors, and related processes that go on most of the time without discontinous, public, collective claim making.  Trust networks and their segments get involved in noncontentious politics more regularly -- and usually more consequently -- than in contentious politics. (chapter 1, Kindle loc 208)

The idea of a trust network represents a different way of getting a handle on the contrast between self-interested agency and group-oriented agency, which in turn corresponds to "economistic" and "sociological" approaches to social behavior.  Is it interests or norms that guide social behavior?  By introducing the idea of a trust network, Tilly is able to find a position someplace else on the spectrum -- neither purely self-interested behavior nor routine normative conformance.  Instead, agents within trust networks behave as purposive, goal-directed actors; but they have commitments and resources that people in other social settings lack, and they are thereby enabled to achieve forms of collective action that are impossible elsewhere.  We might say that Tilly is offering an account of the microfoundations of collective action, or of a certain kind of collective action.

In line with Tilly's lifelong interest in taxation and state-building, the idea of resource extraction plays a central role in his analysis of trust networks.  A central theme is the struggle between the tax-collecting state and the elusive, tax-evading trust networks that exist in civil society.  "Rulers have usually coveted the resources embedded in such networks, have often treated them as obstacles to effective rule, yet have never succeeded in annihilating them and have usually worked out accommodations producing enough resources and compliance to sustain their regimes" (kindle loc 229).

It is interesting to connect this dialectic of predation and evasion with the arguments Jim Scott puts forward in The Art of Not Being Governed: An Anarchist History of Upland Southeast Asia (link).  Part of the effectiveness of the highland peoples of Burma in Scott's account is the density of their social relationships and a consequent ability to sustain a degree of collective resistance that would be impossible in a less dense society.  And, in fact, Tilly's analysis of the tactical situation of a trust network subject to the superior coercive power of some other entity is enlightening in Scott's story as well.  Consider these avenues that Tilly advances as collective strategies for protecting a given trust network against the pressures of the surrounding state: concealment, dissimulation, clientage, predation, enlistment into the regime, bargaining, and dissolution (chapter 2, kindle loc 794).  We can find examples of each of these strategies in Scott's analysis of Burma.  More pointedly, we can see instances of almost all these strategies in the current conflicts between the Burmese junta and the cease-fire groups such as the Kachin Independence Organization (link, link).

So what kind of analysis is Tilly offering here?  What is the use of this concept from the point of view of the social sciences, beyond the metaphor and analytical specifics? Are there concrete historical or sociological hypotheses in play?  Does this concept provide a better basis for explaining some puzzling outcomes than existing theories?  Or, possibly, is the concept of a trust network another example of a part of the sociologist's toolkit: an ideal-typical description of a real social mechanism whose workings can be discerned in a variety of contexts?

Tilly is relatively explicit about several of these questions.  To start: he does not believe that "trust networks" constitute a homogeneous social kind.  We cannot offer a general account of the essential features of a trust network (kindle loc 823).  We can do a certain amount of classification within the group of social configurations that we call "trust networks".  So "trust networks" are socially real, and we can use ordinary methods of social and historical inquiry to map out some of their properties.

Further, he believes, we can state some mid-level regularities about trust networks and political regimes: for example,
Another important question is the role of evidence in this treatment.  Tilly offers dozens of examples of significant historical instances of trust networks at work -- as predators, as prey, and as potential subjects of extractive rule.  And we can ask this question: what is the evidentiary value of the examples?  Are they merely illustrative?  Do they serve to pinpoint some of the specifics of discrete social mechanisms?  Or are they more like suggestive heuristic cases that may point us in the direction of a more developed theory?

I think that Tilly's view would be something close to the second option here: the examples are valuable and insightful because they provide relatively transparent instances in which the mechanisms are fully exposed. They are a bit like the observations of "animalcules" through van Leeuwenhoek's microscope: glimpses of an underlying mechanism that proves to be an important constituent of more macro-level processes.

At the same time, the analysis doesn't add up to a "theory" of trust networks; it is more analogous to descriptive ecology than it is to the theory of the gene.  When Darwin documents the variety of finches in the Galapagos Islands, or when Wallace painstakingly describes the myriad distinct species of beetles he finds in the jungles of the Malay archipelago, each is involved in a kind of scientific work that stands between pure description and explanatory theorizing.  And this seems to be roughly where Tilly's dissection of trust networks falls as well.

It is also interesting to consider whether there are important examples of trust networks in the world today.  And it seems clear that there are.  The situation of the ethnic movements in contemporary Burma is one good example.  Domestic terror groups and right-wing militias provide another clear set of examples.  The American Civil Rights movement, the Freedom Riders, and SNCC's organizing efforts offer another good set of examples as well (link).  So the concept of a trust network is in fact a valuable contribution to the study of collective action and social mobilization.
Posted by Dan Little at 6:00 PM

Excellent post! Thank you for referring me to this book; it's really enriched my thinking.