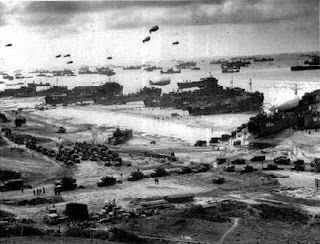 What difference does it make to a person's personality, values, agency, or interpretive schemes that she was born in 1950 rather than 1930 or 1970?  How does a person's place in time and in a stream of historical events influence the formation of his or her consciousness?  (I've raised some of these questions in prior posts, here and here.)

If we thought of people as being pretty much uniform in their motivations and understandings of the world, then we wouldn't be particularly interested in the micro-circumstances that defined the developmental environment of a cohort; these circumstances would have been expected to lead to pretty much the same kinds of actors.  We don't think it is useful to analyze ants or cattle into age cohorts.

If, on the other hand, we think that a person's political and social identity, the ways in which she values a range of social and personal outcomes, the ways in which she organizes her thinking about the world -- if we think that these basic features of cognition, valuation, and motivation are significantly influenced by the environment in which development and maturation take place, then we are forced to consider the importance of cohorts.

The ideas of the "Great Generation" the "Children of the Depression," or the "Sixties Generation" have a certain amount of resonance for us. We think of the typical members of these cohorts as having fairly important features of personality, memory, and motivation that are different from members of other cohorts.  Americans born in the 1920s were thrown into social environments that were very different from those of people born twenty years earlier or later.  And their political consciousness and behavior seem to reflect these differences.

But here is the difficult question raised by these considerations: how should sociologists attempt to incorporate the possibility of cohort differences in behavior and outlook?  Here is one possible way of conceptualizing cohort differences with respect to a personality characteristic -- let's say "propensity to trust leaders."  Suppose we have conducted a survey that operationalizes this characteristic so that the trust propensity of each individual can be measured.  We might postulate that every individual has some degree of trust, but that different cohort groups have different mean values and different distributions around the mean.

The graph below represents four hypothetical cohorts: purple, blue, green, red.  Blue, green, and red cohorts have the same mean value for trust (normalized to 0).  But they differ in terms of the degree of variation there is within the cohort with respect to this feature.  The red cohort is tightly scattered around the mean, whereas the blue cohort is very widely distributed.  The "average" red individual has the same degree of trust as the average blue individual; but there is a much wider range of the blues than the reds.  Members of the purple cohort show a fundamentally different behavior.  They have a significantly lower level of trust, with a mean of -2.  And the degree of distribution around the mean is moderate for the purple cohort -- not as tight as the reds, not as broad as the blues.  Finally, it should be noted that there are reds, greens, and blues who are as untrusting as some purples, and there are some purples who are more trusting than some reds, greens, and blues.  In other words, the distributions overlap. 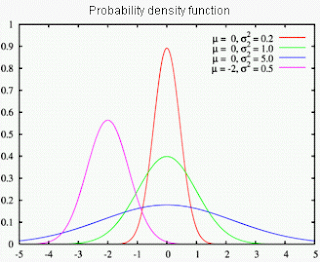 If we were confronted with data like these, our next question would be causal and historical: what were the circumstances of development in which the generation of people in the purple cohort took shape that caused them to be less trusting than other cohorts?  And what circumstances led the blue cohort to have such a wide distribution of variation in comparison to the green and red cohorts?

Now let's put some dates on the curves.  Suppose that the purple cohort is the baby-boom generation -- people born between 1945 and 1954.  Red is the "Greatest Generation", born between 1915 and 1924.  And blue is the "me-generation", born between 1955 and 1964.  We might speculate that growing up in the sixties, with a highly divisive war in Vietnam underway, a government that suffered a serious credibility gap, and a youth culture that preached the slogan, "trust no one over 30!", would have led to a political psychology that was less inclined to trust government than generations born earlier or later.  So the Purple cohort has a low level of trust as a group.  The social necessity of sticking together as a country, fighting a major world war, and working our way out of the Great Depression, might explain the high degree of unanimity of trust found in the Red cohort.  And the Blue generation is all over the map, ranging from a significant number of people with extremely low trust to an equal group of extremely high trust.  We might imagine that the circumstances of maturation and development following the wild and crazy sixties imposed little structure on this feature of political identity, resulting in a very wide distribution of levels of trust.

It is also important to consider some of the factors that vary across time that might have important influences on the development of different cohorts.  Circumstances like war, famine, or economic crisis represent one family of influences that are often markedly different across age cohorts.  Ideologies and value systems also change from decade to decade.  The turn to a more conservative kind of Christianity in the United States in the 1990s certainly influenced a significant number of young people coming of age during those decades, and the value system of nationalism and patriotism of the 1940s and 1950s influenced the young people of those decades.  Third, institutions change significantly over time as well. Schools change, the operations and culture of the military change, and the internal workings of religious institutions change.  So the institutions in which children and young adults gain their perspectives, motives, and allegiances are often significantly different from one decade to another.  And presumably, all these factors are involved in the formation of the consciousness and identity of the young people who experience them.  Difference in settings (events, ideologies, institutions) lead to differences in psychology across cohorts.

Andrew Abbott raised some of these questions in his presidential address to the Social Science History Association in 2004 (link).  The title he chose is illuminating -- "The Historicality of Individuals".  And the central point here could be put in the same terms: it is important for us to attempt to understand processes of social and historical change, through the shifting characteristics of the age-specific populations that make these processes up. The historicality of individuals adds up to the sociological importance of cohorts.
Posted by Dan Little at 7:20 PM

It is worth noting a common methodological concern with repeated cross-sectional survey. The age-period-cohort problem. This paper is a good place to learn about it: http://home.uchicago.edu/~yangy/files/Yang_Land_SMR08.pdf