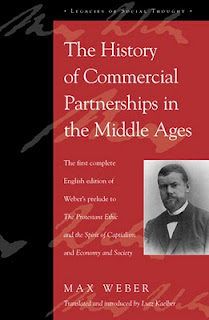 image: cover of Max Weber, The History of Commercial Partnerships in the Middle Ages

I've never really understood why the exposition of one of Max Weber's most important methodological ideas, his theory of ideal types, occurs in the context of an essay that is primarily about the role of values in the social sciences.  This is his essay, "'Objectivity' in Social Science and Social Policy" in The Methodology of The Social Sciences

.  The central thrust of the essay is to attempt to spell out the ways that objectivity and truth relate to partisanship and values within the course of social science research and teaching.  And Weber draws a sharp distinction between what can be known and demonstrated (empirical facts and causal relationships) and what can be internally tested for consistency but not demonstrated (fundamental value commitments).  Here is how Weber puts the point early in the essay:


What has been the meaning of the value-judgments found in the pages of the Archiv regarding legislative and administrative measures, or practical recommendations for such measures? What are the standards governing these judgments?  What is the validity of the value-judgments which are uttered by the critic, for instance, or on which a writer recommending a policy founds his arguments for that policy?  In what sense, if the criterion of scientific knowledge is to be found in the "objective" validity of its results, has he remained within the sphere of scientific discussion? We will first present our own attitude on this question in order later to deal with the broader one: in what sense are there in general "objectively valid truths" in those disciplines concerned with social and cultural phenomena? (50-51)

The theory of ideal types is an important contribution to the specification of the nature of concepts in the human and historical sciences.  But why is this subject particularly relevant in the context of a discussion of values and social policy?

One reason for the conjoining of ideal types and values is the unavoidable fact of selectivity in the social sciences.  Weber makes the point repeatedly in this essay that there is an infinite depth to social phenomena -- even to a single phenomenon or event -- and therefore it is necessary to select a finite representation of the object of study if we want to approach a problem scientifically.  But how do we select a specific aspect of a phenomenon for study?  We do so on the basis of a judgment of what aspects are important -- and this is a value judgment, either directly or indirectly.  In a very specific sense, our interests (material and intellectual) guide the formation of our social-science research projects.  "The quality of an event as a 'social-economic' event is not something which it possesses 'objectively.' It is rather conditioned by the orientation of our cognitive interest, as it arises from the specific cultural significance which we attribute to the particular event in a given case" (64).  And a few pages later: "Social economic problems do not exist everywhere that an economic event plays a role as cause or effect -- since problems arise only where the significance of those factors is problematical and can be precisely determined only through the application of the methods of social-economics" (66).

Or in other words: what constitutes an economic situation as a "problem" is the fact that it has consequences that intersect with things we care about -- or our fundamental scheme of values.  So the subject matter of "social-economics" is doubly dependent on our interests: our cognitive interests in how things work, and our practical interests in how to promote "good" outcomes and avoid "bad" outcomes.

This is where the issue moves into connection with the theory of ideal types.  Weber makes it clear that he regards the formulation of a scientific research topic as being generated by a set of interests -- cognitive and practical.  And this is where the idea of an ideal type is relevant.  Because an ideal type is a selective, one-sided representation of an aspect of social life.  Here is the foundational description that Weber offers in conjunction with the idea of a "commodity-market":


This conceptual pattern brings together certain relationships and events of historical life into a complex, which is conceived as an internally consistent system.  Substantively, this construct is itself like a utopia which has been arrived at by the analytical accentuation of certain elements of reality.  Its relationship to the empirical data consists solely in the fact that where market-conditioned relationships of the type referred to by the abstract construct are discovered or suspected to exist in reality to some extent, we can make the characteristic features of this relationship pragmatically clear and understandable by reference to an ideal-type.  It is not a description of reality but it aims to give unambiguous means of expression to such a description.  It is thus the "idea" of the historically given modern society, based on an exchange economy, which is developed for us by quite the same logical principles as are used in constructing the idea of the medieval "city economy" as a "genetic" concept. ... An ideal type is formed by the one-sided accentuation of one or more points of view and by the synthesis of a great many diffuse, discrete, more or less present and occasionally absent concrete individual phenomena, which are arranged according to those one-sidedly emphasized viewpoints into a unified analytical construct. In its conceptual purity, this mental construct cannot be found empirically anywhere in reality. (90)

This specification of the concept of an ideal type links back to Weber's discussion of the value of specialization in the social sciences: "the justification of the one-sided analysis of cultural reality from specific 'points of view' -- in our case with respect to its economic conditioning -- emerges purely as a technical expedient from the fact that training in the observation of the effects of qualitatively similar categories of causes and the repeated utilization of the same scheme of concepts and hypotheses offers all the advantages of the division of labor" (71).  In other words, the specialization of research methods and training that is implied by the establishment of disciplines in the social sciences is justified pragmatically rather than epistemically -- it is the practical advantage in research productivity rather than the nature of the social world that justifies the establishment of disciplines.


There is no absolutely "objective" scientific analysis of culture -- or put perhaps more narrowly but certainly not essentially differently for our purposes -- of "social phenomena" independent of special and "one-sided" viewpoints according to which -- expressly or tacitly, consciously or unconsciously -- they are selected, analyzed and organized for expository purposes. (72)

This locates the role and justification of the "ideal type" very precisely.  An ideal type -- of a market economy, of a university, or of a banking institution -- creates a selective model of social organization that can then be explored analytically and empirically by specialists.  The ideal type is not intended to be a general representation of a category of phenomena; but rather as a heuristic model that permits exploration and extension of some of the characteristics of the concrete social institutions and behaviors that it partially represents.

Throughout this discussion is woven the methodological debate between advocates of nomothetic and idiographic interpretations of the social sciences (link).  Weber indicates his own understanding of the crucial importance of the individuality and particularity of historical phenomena -- without abandoning the viability of discovering limited generalizations and regularities.


Laws are important and valuable in the exact natural sciences, in the measure that those sciences are universally valid.  For the knowledge of historical phenomena in their concreteness, the most general laws, because they are most devoid of content are also the least valuable.  The more comprehensive the validity -- or scope -- of a term, the more it leads us away from the richness of reality since in order to include the common elements of the largest possible number of phenomena, it must necessarily be as abstract as possible and hence devoid of content.  In the cultural sciences, the knowledge of the universal or general is never valuable in itself. (80)

Here again, the historically detailed ideal type is a better basis for historical and social analysis.

Here is one additional qualification that Weber offers that is very important to his understanding of social-scientific knowledge:


We have designated as "cultural sciences" those disciplines which analyze the phenomena of life in terms of their cultural significance.  The significance of a configuration of cultural phenomena and the basis of this significance cannot however be derived and rendered intelligible by a system of analytical laws, however perfect it may be, since the significance of cultural events presupposes a value-orientation towards these events.  The concept of culture is a value-concept. (76)

This makes a final important connection between the two themes of the essay, objectivity and values.  Values come into the social science at the stage of defining and examining social-economic-cultural problems; they come into the choice of subject matter by establishing the framework in terms of which a phenomenon is a "problem"; and they must be invoked in our interpretations of the phenomena when we attribute cultural meanings to the participants.  The construct of the ideal type provides conceptual resources for each of these zones of intersection between social-science inquiry and the schemes of values that we humans endorse.
Posted by Dan Little at 12:24 PM