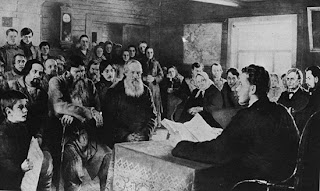 In 1881 Marx wrote a letter to Vera Zasulich, an important Russian follower, that addresses the question of theory and prediction when it comes to thinking about the future course of history.  In particular, he denies that his theories have determinate predictive implications for the development of capitalism or socialism in Russia.  Here is a link to the letter, and below are a few paragraphs.

The issue is an important one: did Marx think of his body of knowledge as constituting a general predictive theory?  And the letter clearly implies that he did not.

The letter is interesting in several respects. First, it explicitly rejects the notion that Marx's economic and historical theories are suited to the task of identifying the necessary or inevitable course of historical development. It summarily dismisses the idea of a necessary sequence of modes of production. Instead, Marx shows himself to recognize the contingency that exists in historical development, as well as the degree to which history creates new conditions in its course that influence future developments.

The other important feature of the letter is its substantive analysis of the material characteristics of the Russian peasant commune, and the potential that this social form has for constituting the material core of an alternative route to socialism in Russia.  As the letter makes clear, Marx thinks that the social relations associated with the peasant commune provide a possible social foundation for a modern socialist economy; and this would be an economy that was not "post-capitalist" but nonetheless technologically and socially advanced.

In a way Marx's argument anticipates the theory of "late developers" -- for example, Gerschenkron's Economic Backwardness in Historical Perspective

.  Marx argues that a socialism in Russia was possible through an alternative pathway.  A version of socialism in Russia based on the "archaic" commune can take advantage of the developments in technology and social organization created by advanced capitalism.  It is not necessary for Russian society to go throughout the several-centuries long process of agricultural and technological modernization that England underwent; rather, Russia can simply adopt the modern technologies now available.

The interest of this letter is not to be found in the historical predictions it makes, but rather in the example it offers of the way that Marx's mind worked.  The reasoning here represents a good example of Marx's materialist approach to history.  He wants to arrive at a fairly detailed level of understanding of the social and economic relations -- the property relations -- that constituted a historical form of the rural commune.  And he then seeks to provide an analysis of the way in which those relations might be expected to develop under a specific set of historical circumstances.  And key within this analysis is the workings of the specific form of property that corresponded to this social system -- the social relations of production.

I suppose the letter illustrates something else as well: Marx's interest at the end of his life in finding an alternative pathway to socialism.  The revolutions of 1848 were long in the past, and a proletarian revolution had not ensued.  The Paris Commune had been decisively and violently repressed in 1871.  Working-class militancy was not propitious in the advanced capitalist countries -- France, Germany, or Britain.  So the prospects of revolution in the advanced capitalist world were not encouraging to Marx.  And so finding some hope for an alternative process of social development through which the ends of socialism might be achieved was an appealing prospect for Marx.

Here are the first few paragraphs of the letter, which is worth reading in full:


1) In dealing with the genesis of capitalist production I stated that it is founded on “the complete separation of the producer from the means of production” (p. 315, column 1, French edition of Capital) and that “the basis of this whole development is the expropriation of the agricultural producer. To date this has not been accomplished in a radical fashion anywhere except in England... But all the other countries of Western Europe are undergoing the same process” (1.c., column II).

I thus expressly limited the “historical inevitability” of this process to the countries of Western Europe. And why? Be so kind as to compare Chapter XXXII, where it says:

The “process of elimination transforming individualised and scattered means of production into socially concentrated means of production, of the pigmy property of the many into the huge property of the few, this painful and fearful expropriation of the working people, forms the origin, the genesis of capital... Private property, based on personal labour ... will be supplanted by capitalist private property, based on the exploitation of the labour of others, on wage labour” (p. 341, column II).

2) From the historical point of view the only serious argument put forward in favour of the fatal dissolution of the Russian peasants’ commune is this: By going back a long way communal property of a more or less archaic type may be found throughout Western Europe; everywhere it has disappeared with increasing social progress. Why should it be able to escape the same fate in Russia alone? I reply: because in Russia, thanks to a unique combination of circumstances, the rural commune, still established on a nationwide scale, may gradually detach itself from its primitive features and develop directly as an element of collective production on a nationwide scale. It is precisely thanks to its contemporaneity with capitalist production that it may appropriate the latter’s positive acquisitions without experiencing all its frightful misfortunes. Russia does not live in isolation from the modern world; neither is it the prey of a foreign invader like the East Indies.

And here is an important summary statement:


Theoretically speaking, then, the Russian “rural commune” can preserve itself by developing its basis, the common ownership of land, and by eliminating the principle of private property which it also implies; it can become a direct point of departure for the economic system towards which modern society tends; it can turn over a new leaf without beginning by committing suicide; it can gain possession of the fruits with which capitalist production has enriched mankind, without passing through the capitalist regime, a regime which, considered solely from the point of view of its possible duration hardly counts in the life of society. But we must descend from pure theory to the Russian reality.

There is a major irony in rereading Marx's analysis of the emancipatory possibilities inherent in the social form of the "peasant commune" in Russia.  Most striking is the experience of the collectivization of Soviet agriculture in the 1920s and Stalin's war on the kulaks.  Rather than representing a bright new future for the peasants, collectivization represented a cruel war by starvation against rural society (Lynne Viola, The War Against the Peasantry, 1927-1930: The Tragedy of the Soviet Countryside, Volume one (Annals of Communism Series) (v. 1)


It is also also interesting to recall that one of the disputes among the Bolsheviks within Soviet leadership in the 1920s and 1930s was the issue of cooperatives in agriculture.  A. V. Chayanov advocated for a more democratic route to Soviet socialism, through the mechanism of locally established rural cooperatives (link).  His reasoning had quite a bit in common with Marx's analysis in this letter to Vera Zasulich; and, of course, it led to his persecution and execution in 1937.

Rural conditions in Russia changed substantially between when Marx wrote and 1917 (especially the Stolypin reforms) and changed yet again during the Russian Revolution.