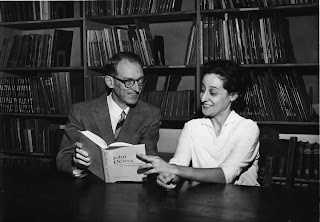 I've been once again thinking about the ways that a given thinker takes shape throughout his or her life. (I touched on this question in a post several years ago on influences, and most recently in a post on Peter Berger.) There are a couple of dimensions to this problem. We can think of the thing undergoing change as the thinker's framework of thought or intellectual imagination. This would be to look at the intellectual as the creator or curator of a body of ideas and approaches to a subject matter.  Or we can think of the thing that is changing as the career -- the pathway the intellectual takes into and through the publicly defined standards, appointments, and indications of success of the chosen field of thought, and the series of career-field locations that he or she occupies over time. The first is more interior and the second more situational and public.

Gross and Camic refer to this question as the "sociology of ideas." It has also been treated by historians of ideas -- subject to the criticism that they've paid too much attention to the logic of development of the ideas themselves and not enough to the socially situated authors and promulgators of those ideas. But we could also refer the question to the social psychologist or even the existential biographer: in what ways does the individual create his or her own intellectual itinerary?

To map the content of the intellectual's thought-work we need some way of recording the signposts of the evolution of the thinker's thought. These might be things like these:
So W.V.O. Quine becomes a philosopher rather than a chemist; he immerses himself in analytical philosophy; he focuses on the problem of scientific knowledge; he gets to a pathbreaking insight (critique of logical positivism from within); his reasoning is logical, analytical, and deductive; and his constellation of stars includes Pierce, Carnap, and Reichenbach. At each juncture we can ask "why?" -- why did the person make the choice or move in a particular direction?  Sometimes the answer will be an explicit choice; sometimes it will involve the shared presuppositions of a discipline at a point in time.

To map "career" we can highlight choices made and opportunities conveyed that signal advancement within the social realm of the profession:
There is an intertwining connection between these two frameworks. The intellectual makes choices in each zone -- which topics to pursue and which career milestones to seek out. And as Gross and Bourdieu make plain, the choice of topic has consequences for the opportunities offered in career -- a circumstance that explicitly or implicitly influences the intellectual's choices of topics and approaches. But the direction one's research and thinking take also are positively influenced by the events of the career. Burton Dreben's opportunity to become a Junior Fellow at Harvard under the mentorship of Quine fundamentally shaped his thinking as a mathematical logician.

Neil Gross and Crystal Fleming illustrate several of these points in their study of Mike Johnson in the Camic-Gross-Lamont volume, Social Knowledge in the Making

.  They offer a thumbnail of Johnson's first steps towards the career of academic philosophy, his considerations about career advancement, and his own particular insights into philosophical issues that have bearing on the experience of Native Americans.  With this as background, they offer an ethnographic account of the making of a conference paper that Johnson was to present in Paris.  Their account demonstrates a complexly intertwined reality of internal philosophical work and career management.

So calculation, ambition, and the incentives of the field play a role in the academic's intellectual development.  At the same time, we would like to think that the intellectual has his or her own internal compass for topics and why they matter (which Gross handles with his discussion of "self concept", and which Gross and Fleming identify in their study of Mark Johnson under the rubric of the particular insights that Johnson's cultural and class background led him to). We want to suppose that there is a degree of creativity, originality, and self-direction that plays some role in the intellectual's development.

And there is the stochastic ebb and flow of minor events that influence the course of an intellectual's development: this book was published, that funding opportunity came along, that invitation to contribute to a volume was received. Each of these minor events puts a small impetus into the stream -- a new idea, a new approach, a new set of stimulating colleagues who provide further impetus. It might be the case that for some intellectuals, these are the most important influences of all in the shaping of thought and career.  Curiosity plus intelligence plus random exposures to intriguing questions = a cumulative but meandering body of thought.

This is fairly abstract. But make it more concrete by considering a conversation with three sociologists and a philosopher about the ways a sociologist develops over time. The sociologists are highly accomplished and valued in their discipline. One is born in 1931, one in 1949, and one in about 1950. The youngest, a woman, was born in Cuba. For her the experience of witnessing revolution and social movements as a child was fundamental. Her career has focused on better understanding these events and processes in Latin America. The oldest, a man, talked about the mentors whose example had influenced him -- dissertation advisor, more senior colleagues in early teaching posts, and now more junior colleagues (by half a century!) who continue to stimulate his thinking. An important turn in his career took place about twenty years ago when he began thinking about sociology as a humanistic discipline. The third, also a man, offered a "maverick's" view of his career. Topics were chosen because they were interesting to him at the time, not because the discipline incentivized these topics. He gave the impression that his thinking had developed in a way that might be described as "oppositional". New topics emerged over time through fairly accidental circumstances. There is no rhyme or reason to his development, no characteristic signature. (Knowing this sociologist's work well, I disagreed: there is an arc to his work and a very distinctive style of thinking.) All three had known Chuck Tilly well and had thoughtful things to say about how Chuck's program of sociological thought had developed. (A new element emerged there: the very close and productive relationships Chuck had with hundreds of graduate students.)

I am not a sociologist, and empirical study of this issue probably isn't in my future. But it seems very worthwhile to have the kinds of conversations I'm describing here and try to piece together more detailed genealogy of American sociological thought through the development of its innovative traibreakers. And in fact, the interviews I've done with a number of leading sociologists (link) perhaps sheds a little bit of light on this very subject. My interest in doing the interviews was to capture some of the person's most innovative ideas. But along the way there has been quite a bit of talk about how their thought developed.

Another result of the conversation I describe here was something you might expect in a conversation among academics--a list of useful readings. Here are three collections of autobiographical writings by sociologists and theorists that try to relate their careers to their times.

Alan Sica and Stephen Turner, The Disobedient Generation: Social Theorists in the Sixties

Bennett Berger, Authors of Their Own Lives: Intellectual Autobiographies by Twenty American Sociologists

The career map seems overly restricted to academic careers. I think of Lewis Henry Morgan, a lawyer; Benjamin Whorf, an insurance adjuster; Louis Auchincloss, another lawyer; William Carlos Williams, also involved in insurance? Especially now that public funding for academia is declining and the Internet makes possible interaction with intellectual peers outside the ivory tower, I surmise a world in which their are more people like me, an anthropologist who found a way to make a living in advertising but remained engaged enough to publish in academic journals and with academic presses.