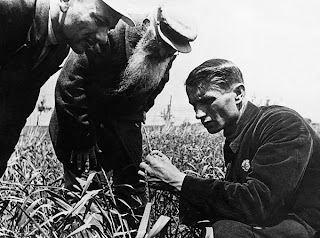 The sociology of knowledge has received a new burst of energy in the past few years, with quite a bit of encouragement and innovation coming from Science, Technology and Society studies (STS).  (STS overlaps substantially with the SSK research tradition described briefly in an earlier post.)  Charles Camic and Neil Gross have made very substantial contributions in the past few years, with special focus on the knowledge activities associated with the humanities and social sciences.  (Gross's intellectual sociology of Richard Rorty is discussed here.)

So what is going on in this field today?  Camic, Gross, and Lamont, Social Knowledge in the Making, offers a genuinely pathbreaking collection of articles on different aspects of "social knowledge practices".  The editors' introduction to the volume does an excellent job of laying out the issues that current sociology of knowledge needs to confront.  They illustrate very clearly the differences in perspective associated with traditional intellectual history (which they describe as "traditional approach to social knowledge"; TASK), reductionist sociology of knowledge (attempting to link social conditions to specific set of ideas), and the science studies approach, which focuses a great deal of attention on the specific knowledge practices through which a community constructs and furthers a body of knowledge.

The editors make the point that the STS framework (and the SSK approach) is largely focused on the social practices connected with the natural and biological sciences -- laboratories, graduate schools, journals, conferences. And they argue that the fields of knowledge production involved in social knowledge are both important and distinctive.  (They are distinctive for at least three reasons: social knowledge is reflexive, the data must be gathered from subjective participants, and there are powerful interests in play that are pertinent to various formulations of social knowledge.)  So it is timely to pay equally close attention to the practices and institutions through which economics, philosophy, sociology, or Asian Studies frame and construct knowledge.  This volume attempts to give a number of rigorous examples in different areas of the social knowledge domains of that kind of empirical-sociological research.

Here are a few premises of the editors' approach to the problem:


By "social knowledge" we mean, in the first instance, descriptive informaton and analytical statements about the actions, behaviors, subjective states, and capacities of human beings and/or about the properties and processes of the aggregate or collective units -- the groups, networks, markets, organizations, and so on -- where these human agents are situated. (kl 78)

They also include in their definition of social knowledge the ways of knowledge making:


... the technologies and tools of knowledge making -- that is, the epistemic principles, cognitive schemata, theoretical models, conceptual artifacts, technical instruments, methodological procedures, tacit understandings, and material devices by which descriptive and normative statements about the social world are produced, assessed, represented, communicated, and preserved. (kl 78)

Key to their approach is to engage in detailed studies of the social practices associated with knowledge production.  Here is how they define a social practice:


We define "practices" as the ensembles of patterned activities -- the "modes of working and doing," in Amsterdamska's words -- by which human beings confront and structure the situated tasks with which they are engaged.  These activities may be intentional or unintentional, interpersonally cooperative or antagonistic, but they are inherently multifaceted, woven of cognitive, emotional, semiotic, appreciative, normative, and material components, which carry different valences in different contexts. (kl 122)

The goal of this research effort is to do for the social sciences and humanities what the STS/SSK researchers have done for the natural sciences.  This tradition has ...


shifted scholarly attention away from science as a finished product in the temple of human knowledge and toward the study of the multiple multilayered and multisited practices involved during the long hours when future kernels of scientific knowledge are still in the making. (kl 152)

Here is one of the core observations that the editors draw from the research contributions to the volume:


One of these themes is that social knowledge practices are multiplex, composed of many different aspects, elements, and features, which may or may not work in concert. Surveying the broad terrain mapped across the different chapters, we see, for example, the transitory practices of a short-lived research consortium as well as knowledge practices that endure for generations across many disciplines and institutions... (kl 338)

At site after site, heterogeneous social knowledge practices occur in tandem, layered upon one another, looping around and through each another, interweaving and branching, sometimes pulling in the same directions, sometimes in contrary directions. (kl 353)

So how can this research goal be carried out in practice?  Here is how Andrew Abbott pursues some of these questions in his contribution to the volume in an essay that investigates in detail how historians have used libraries in their research:


I have two major aims in this chapter. The first is empirical. I want to recover the practices, communities, and institutions of library researchers and their libraries in the twentieth century. There is at present almost no synthetic writing about this topic, and I aim to fill that gap. This empirical investigation points to a second more theoretical one.  There turns out to be a longstanding debate between librarians and disciplinary scholars over the proper means to create, store, and access the many forms of knowledge found in libraries. By tracing the evolution of this debate, I create a theoretical context for current debates about library research. (kl 581)

One thing I find interesting in reading this work is the absence of the philosophy of science as one of the reflective areas of research through which the knowledge process is examined.  Thomas Kuhn is mentioned as an intellectual founder of the historical-sociological approach to the problem of scientific knowledge; but the vibrant discipline of the philosophy of science is not mentioned by any of the contributors.  This seems to be a lost opportunity, since philosophers too are trying to make sense of the processes, procedures, and norms of the sciences along the way towards an interpretation of philosophical ideas such as truth and objectivity in knowledge.  It would be highly interesting to see a careful study of the development of post-positivist philosophy of science (from Peter Achinstein, Hilary Putnam, and Bas van Fraassen to the present day, let's say), by a sociologist who is willing to take the trouble to carefully examine the doctrines, schools, graduate programs, journals, associations, and dominant ideas that have evolved in the past half century within philosophy.

Tandem with this absence of the philosophy of science is an avoidance of epistemic concepts like "validity," "approximate truth," or "widening understanding of how the social world works."  The impression given by this volume, anyway, is that the task of the sociology of knowledge is solely restricted to examination of the practices and material conditions through which systems of belief about the social world are formed, without a concomitant interest in evaluating the success of the enterprise at establishing some of the facts of how the world works.  This impression is born out in the closing paragraphs of Camic's entry on "Knowledge, Sociology of" in the International Encyclopedia of the Social and Behavioral Sciences. Referring essentially to the approach taken by contributors to Social Knowledge in the Making, Camic writes:


This second approach focuses the sociology of knowledge mainly on men and women who specialize in the production of ideas and on the particular social processes by which their ideas emerge and develop—a move that, in effect, transforms the field into a sociology of ideas. This perspective has tended to reject the core assumptions of the older sociology of knowledge, building instead on schol- arship that argues that sociocultural processes are as much internal to the content of ideas as they are external (Bloor 1976, Shapin 1992), that the meanings of ideas are only understandable to an investigator after careful contextual reconstruction (Skinner 1969), and that local, micro-level settings are often the main sites for the development of ideas (Geertz 1983, Whitley 1984). Like the broad-constructionist ap- proach, this narrow-constructionist perspective pre- sently provides a foundation for several lines of empirical research (see Camic and Gross 2000). No forecast can yet be made, however, as to which approach, if either, will rescue the sociology of knowledge from its traditionally marginal position in the discipline of sociology. (8146)

This excerpt too emphasizes the internal practices of the various knowledge communities, rather than the likelihood that the product of knowledge production is valid, veridical, or rationally supportable.


As I found in the earlier post on research communities, it seems that there needs to be more communication and mutual learning between the sociology of science and the philosophy of science. Admittedly the two disciplines have different goals; but in the end, we would like to understand both aspects of the process of knowledge formation in a way that makes coherent sense: the concrete social practices and the cognitive merits of the results.  Otherwise we have no basis for diagnosing what went wrong with Soviet biology and Lysenkoism (depicted in the photo at top).
Posted by Dan Little at 9:58 PM

I think there is an obvious problem in any field of modern scientific (but also philosophical) research: none of us can know everything. We cannot read everything and even if we have enough time to do that, we won't be able to remember it.
This is a strong constrain.
I don't see any easy way to solve this problem (assumed it is a problem :), but for sure multidisciplinary team working could be one idea.
But for having that we need mutual trust among disciplines... and some kind of at least partially cooperative framework.

Mr. Violet, you are right about this fundamental constraint on new knowledge production. It is attenuated to some extent by the fact that we spend less time having to locate the relevant new information; but it is certainly true: on any given subject of interest, there is more research material available that one person can master. This leads, it would seem, to increasing specialization as researchers narrow their focus so they can be expert on the topic they investigate. But it also means that it will be more difficult to identify and explore the connections that exist in problems across specialized literatures. So multidisciplinary research is a possible and partial remedy.

I thought that I would share an example of knowledge production and its impact on humanity. Its a book called 'Race Decoded: The Genomic Fight for Social Justice'.