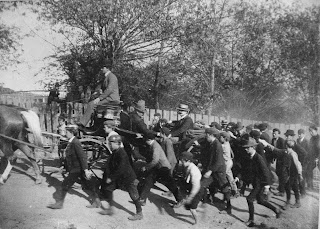 Socially situated. In any given situation individuals are embedded within a set of social relations and institutions that create opportunities and costs for them. They have friends and enemies, they have bosses and workers, they have neighbors and co-religionists, they have families. All of these relations and institutions serve to constitute the environment within which they make plans and perform their actions. This complex setting of opportunities and regulative systems falls at the center of research for the new institutionalism (Brinton and Nee 1998, The New Institutionalism in Sociology; Ostrom 1990, Governing the Commons: The Evolution of Institutions for Collective Action ). And, as the new institutionalists rightly insist, there are very important variations across social space in the details of the workings of institutions and social networks. Two adjacent California counties may have slightly different rules of livestock liability; and these rule differences will lead to different patterns of behavior by ranchers (Ellickson 1986, "Of Coase and Cattle"; link). We might call this the "structure" factor.

Socially constituted. The second form of social embeddedness is deeper and more persistent. The individual’s values, commitments, emotions, social ideals, repertoires of action, scripts of behavior, and ways of conceiving of the world are themselves the products of a lifetime of local social experiences. Individuals are socialized throughout their childhoods and adult lives into specific ways of thinking and acting, and the mosaic of these experiences serves to constitute the moral, emotional, and practical characteristics of the individual’s social-cognitive system. The way the individual thinks about the social world is itself a feature of his/her social setting. Moreover, the mechanisms of socialization—schools, religious institutions, military experience, playgrounds, families—are themselves concrete social phenomena that are amenable to empirical sociological investigation, and they too are locally embodied. If we want to know why affluent Pakistani teenagers applauded on Facebook the murder of Punjab Governor Salmaan Taseer for his opposition to harsh blasphemy laws, then we need to look in detail at the ways in which the political and religious attitudes of this segment of Pakistani society took shape (link). We might call this the "identity" factor.

These two aspects of embeddedness provide the foundation for rather different kinds of social explanation and inquiry.  The first aspect of social embeddedness is entirely compatible with a neutral and universal theory of the agent -- including rational choice theory in all its variants.  The actor is assumed to be configured in the same way in all social contexts; what differs is the environment of constraint and opportunity that he or she confronts.  This is in fact the approach taken by most scholars in the paradigm of the new institutionalism, it is the framework offered by James Coleman in Foundations of Social Theory, and it is also compatible with what analytical sociologists refer to as "structural individualism". It also supports the model of "aggregative" explanation -- explain an outcome as the result of the purposive actions of individuals responding to opportunities and constraints.

The second aspect, by contrast, assumes that human actors are to some important degree "plastic", and they take shape in different ways in different social settings.  The developmental context -- the series of historically specific experiences the individual has as he/she develops personality and identity -- leads to important variations in personality and agency in different settings. So just knowing that the local social structure has a certain set of characteristics -- the specifics of a share-cropping regime, let us say -- doesn't allow us to infer how things will work out. We also need to know the features of identity, perception, motivation, and reasoning that characterize the local people before we can work out how they will process the features of the structure in which they find themselves. This insight suggests a research approach that drills down into the specific features of agency that are at work in a situation, and then try to determine how actors with these features will interact socially and collectively.

If both actors and structures differ substantially across social settings, then there are many possible pathways that interactions and processes can take. Suppose for the sake of example that there are three "types" of actors:
Now suppose we are interested in working out the likely consequences of a certain social situation -- let us say, a call for a workers' strike in resistance to the company's cutting wages. Mancur Olson's classic argument in The Logic of Collective Action considers exactly this kind of case based on assumptions reflecting the first form of agency, and he concludes that collective action will fail. So the prediction is that the call for a strike will fail. But what if a significant number of workers are type-3 actors? In this case the likelihood of successful collective action is much greater, because organizers can demonstrate that all workers are better off if the group maintains solidarity, and that it is unfair to withhold support while others are coming forward. This argument doesn't affect the type-1 actor; but it does motivate the type-3 actor.

So what are the social circumstances in which we are likely to find type-3 actors rather than type-1 actors? It has sometimes been maintained that miners have a high degree of solidarity relative to other groups of workers. They have shared circumstances of risk underground that make them viscerally aware of their dependence on the support of others; they have a culture of songs and stories that favor solidarity; and they have a history of successful collective action. So the argument is that children who grow up in this environment confront a converging set of influences that amplify the "solidarity" functions of agency and damp down the "me-first" functions. Miner communities, then, cultivate a particular kind of actors. (A book that tries to do a more careful job of evaluating miners' solidarity is Roy Church and Quentin Outram, Strikes and Solidarity: Coalfield Conflict in Britain, 1889-1966, reviewed here.)

I hope this thread is "to be continued." I really appreciate your ability to take complex theoretical approaches, many of which are based on numerous unstated assumptions, and explain them clearly, including their relationship with other approaches. Great post.