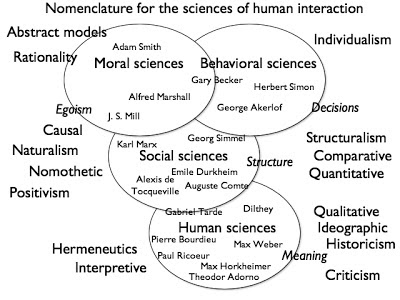 Nomenclature isn't everything -- but it is important nonetheless. What we call the areas of research that examine history, action, and social life makes a difference to how we carry out those inquiries. The label "social science" itself is not a neutral one. And alternatives like "behavioral science" have even more baggage.

The phrase that was favored in nineteenth century German philosophy for these areas of research was "human sciences" (Geisteswissenschaften), the term used by thinkers like Dilthey and Windelband. And French thinkers like Bourdieu and Foucault used the synonym, "les sciences humaines." (Here is an earlier post on Dilthey; link. And here is a good article on Dilthey in the SEP; link.)

Here is a formulation provided by Dilthey in Introduction to the Human Sciences: An Attempt to Lay a Foundation for the Study of Society and History in 1883:


Since Bacon's famous work, treatises which discuss the foundation and method of the natural sciences and thus serve as introductions to their study have been written for the most part by natural scientists. The most famous of those treatises is by Sir John Herschel. It seems necessary to provide a similar service for those who work in history, politics, jurisprudence, or political economy, theology, literature, or art. Those who dedicate themselves to these sciences usually get involved in them because of practical requirements of society, which wants to supply occupational training to equip leaders of society with knowledge necessary to do their work. But this occupational training will enable an individual to achieve outstanding success only to the extent that it goes beyond mere technical training. One can compare society to a great machine workshop kept in operation by the services of countless persons. One who is trained in the isolated technology of a single occupation among those activities, no matter how thoroughly he has mastered his trade, is in the position of a laborer who works away his entire life in one solitary phase of this industry: he has no idea of the forces which set the industry in motion, no conception of its other parts or their contributions to the purpose of the whole enterprise. He is the servile instrument of the society, not its consciously cooperative organ. (77)

So what is involved in the concept of the human sciences? Most centrally, the idea was that there was a fundamental difference between the sciences of nature and the sciences of human action and interaction, because the former had to so with causation whereas the latter had to do with the interpretation of meaning. The human sciences were thought to be interpretive or hermeneutic at their core. A key task for the systematic study of human affairs was to make sense of the actions and expressions of the people involved. We understand a social fact when we understand the intentions, meanings, and self-understandings of the people involved. The tradition of the "human sciences" brings along with it the ideas of hermeneutics, verstehen, and critical theory.

A second important characteristic of the human sciences is the importance of history. Human beings have histories, and they make histories; and history consists of a fabric of meaningful human actions. At a larger scale, thinkers like Dilthey believed that larger historical movements and outcomes were meaningful as well; so history requires interpretation (link). And attention to history pervades the research and choice of topics of practitioners of the human sciences. As Yvonne Sherratt puts the point in Continental Philosophy of Social Science, "continental philosophy is usually a text-centred, historically sensitive tradition" (2).

A third characteristic is the importance of the skills of the humanist scholar within the exercise of the human sciences. "Science" and"humanities" are not sharply separated when it comes to understanding human affairs. Interpretation is one of the core activities of the humanities -- the interpretation of literature, art, or symbols -- and these facilities are equally valuable when it comes to interpreting actions, symbolic rituals, and history.  Sherratt emphasizes the centrality of the methods and sensibilities of the humanities in the continental tradition of thinking about the social world. Here is a particularly interesting observation about the humanist roots of the continental tradition of thinking about the social sciences:


Continental schools have their own canon of thinkers, pose their own questions, set their own agendas and have a rich, deep history stemming back to Ancient Greece, Rome and early Christendom. In fact, it is this connection to its Ancient past, let us say, its humanism, that defines the continental schools of thought apart from Anglo-American philosophy of social science. ... My contention is that continental philosophy of social science is best understood as emergent from humanism. (2)

Finally, the approach taken by advocates of the "human sciences" is decidedly anti-positivist. These social thinkers are not looking for general laws of human behavior; they are not concerned to identify a non-theoretical range of empirical data that would confirm or disconfirm their assertions; and they are not interested in "falsifiability" of hypotheses and theories. The hypothetico-deductive method of confirmation and explanation has no appeal to this tradition. Likewise, this tradition is not particularly receptive to quantitative studies of social behavior; researchers in this tradition are not likely to provide statistical generalizations about a range of social phenomena.  This doesn't mean that research efforts in the human sciences are not based on evidence and argument; but rather that what counts as evidence for an interpretation has as much to do with the overall plausibility of the reading as a particular range of empirical observations.

Philosophers and historians in the German tradition continue to favor the approach identified as the "human sciences" methodology, including Gadamer and Husserl. I would also put Ricoeur, Foucault, and Bourdieu within the general scope of this approach.  And Sherratt also includes the critical theorists of the Frankfurt School within this tradition as well.

I'm not sure if translating Geisteswissenschaften as human sciences is a good translation. Translated literally it would be spirit science.

So, based on the placement of Mill and Marshall, is economics a moral science?

I think the current and lasting impact of Dilthey et al is the post-positivism hermeneutic recognition that all use of data involves interpretation even though the natural sciences can conveniently ignore this understanding in ost instances. The positivist period detour that I'm familiar with in psychology can be recognized and included within a wider hermeneutic understanding so that the ideas of Dilthey today can be post-positivist instead of anti-positivist.

This is a fascinating account of human science and at odds in many ways with how we deliver the science to our clients. In particular your second to last paragraph indicates a foreign approach to what we believe constitutes good science. Daniel I look forward to you finding the time to chat with me about what is good Human Science. Dawn www.igorscience.com or our blog at www.igorscience.org

The Lyrical Self said...

I found this blog post quite useful while researching on the use of hermeneutics in literary studies, and evolving it as a method for interpreting texts, phenomenologically.
The basics regarding 'human sciences' is present in a nutshell.