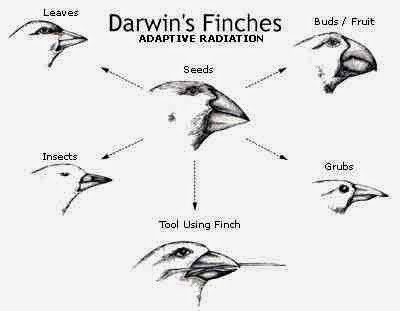 Carl Craver and Lindley Darden provide in In Search of Mechanisms: Discoveries across the Life Sciences an extensive treatment of what a mechanisms-based methodology looks like. Their work originates in study of the biological sciences, but I find that much of what they have to say is very helpful in the philosophy of social science as well.

Craver and Darden argue that the biological sciences have largely adopted a mechanisms-centered view of the nature of their science. So what is a mechanism, on their view?

Mechanisms are how things work, and in learning how things work we learn ways to do work with them. Biologists try to discover mechanisms because mechanisms are important for prediction, explanation, and control.... Mechanisms are entities and activities organized such that they are productive of regular changes from start or set-up to finish or termination conditions. (kl 581)

Fundamentally Craver and Darden  argue that a search for mechanisms is frequently a guided and constrained process, involving an attempt to match the observed activities of the system with a concatenation of known mechanism components. They want to provide a more granular account of the process of research and discovery in science, and they take issue with the idea of a flash of inspiration as the source of scientific insight. Instead, they see the process of a great deal of scientific research as one in which a methodical effort at puzzle-solving takes place, trying out different combinations of known mechanisms to see whether they may serve to explain the phenomenon in question.

They don't mean to say that there is no place for novelty or originality in scientific research; but they argue for a kind of cumulative process for much of the scientific work of discovery that builds upon the prior discovery of mechanisms and components of mechanisms.

Although occasionally biology calls upon a Darwin or a Harvey to introduce an altogether novel kind of mechanism, most episodes of mechanism discovery play out within the space of known mechanism types within a scientific field. (kl 1604) 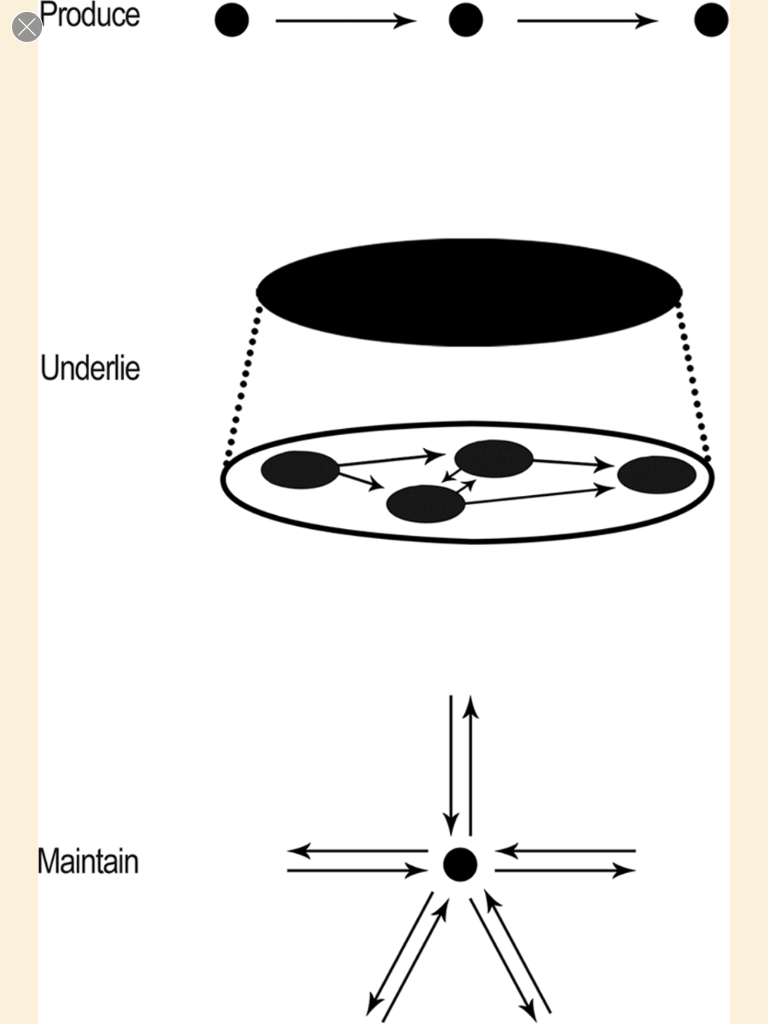 Another interesting observation that C-D develop is the idea of "modular subassembly".

This process, modular subassembly, involves reasoning about how mechanism components might be combined in surprising ways. One hypothesizes that a mechanism consists of (either known or unknown) modules or types of modules. One cobbles together different modules to construct a hypothesized how-possibly mechanism, guided by the goal of finding modules to fill all the gaps in a productively continuous mechanism. In doing so, scientists draw upon their knowledge of the store of types of entities and activities and modules (i.e., interconnected entities and activities that have a particular function). (kl 1726)

This is an important point for social scientists as well, given the common tendency to bifurcate into "macro" and "micro" features of the social world. Instead, C-D give further grounds for insisting that there is a wide and continuous range of levels of aggregation in the social world, and that it is perfectly legitimate to formulate representations of mechanisms that span these levels.
A key feature of C-D's view of biological research is the notion that researchers make use of a wide but known stock of existing mechanisms in their efforts to understand novel phenomena. What are some of those mechanisms? Here is a very interesting table of miscellaneous biological mechanisms that Craven and Darden provide: 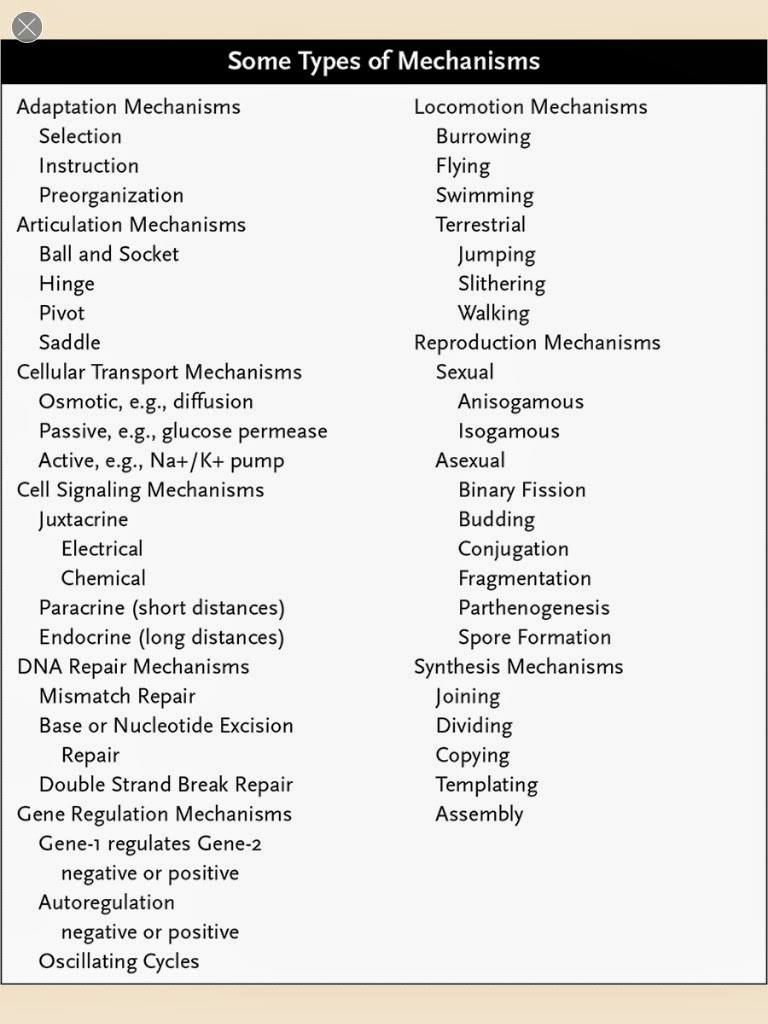 This table is useful exactly because it is not intended to be comprehensive or exhaustive. Rather, it is intended to provide a list of concrete mechanisms that have been observed and investigated in the biological sciences. And, as Craver and Darden argue, a large available base of known mechanisms provides a starting point for researchers who are confronting a novel phenomenon.

How applicable is the Craver-Darden view of mechanism thinking when we turn to various areas of social research? There are obvious differences between the domains of biology and the social sciences, and this seems to be true when it comes to mechanisms.

One visible difference is the relative precision with which we can describe the workings of mechanisms in the two domains. The mechanism of "mismatch repair" mentioned in the C-D table under DNA Repair Mechanisms can be described in a great deal of precision, and this mechanism generally works in the same way in all settings. Compare that with the mechanism of "Audit and accounting" under Organizational Enforcement in my table above. This is also a "repair" function. But the audit function in an organization can be implemented in many different ways with varying degrees of coercion and voluntary compliance. So there is a much wider range of activities encompassed by "audit and accounting" than by "mismatch repair".

There is another kind of precision mismatch that seems to exist between biology and social science as well -- the idea that a mechanism produces the same results in a wide range of settings. Because of the molecular biology that underlies most of the mechanisms that C-D consider, these mechanisms perform like clock-work. Each tick leads to the same advancement of the wheel. But in the social world, the precision of relationship between input to a mechanism and output from the mechanism is much more slack. When a group of workers are called upon to support a wildcat strike, we may hypothesize that the free-rider mechanism will be invoked in this social setting. But free-riding may be so extensive as to cripple the strike, and it may be so limited as to barely influence the outcome at all. We can learn more about the social factors that differentiate these two outcomes. But the key point is that the mechanism is in play in both scenarios, but with very different effects.

One special strength of In Search of Mechanisms is the fact that it is a work of philosophy of science that is highly detailed in its treatment of some of the scientific content of a specific field. We cannot resolve the question of whether mechanisms are a good way of organizing scientific inquiry on the basis of apriori reasoning alone. Rather, we need to see how mechanisms-based reasoning is expressed in a range of scientific areas of inquiry. And this is exactly what Craver and Darden do in this book for a range of biological disciplines.

Email ThisBlogThis!Share to TwitterShare to FacebookShare to Pinterest
Labels: CAT_mechanisms