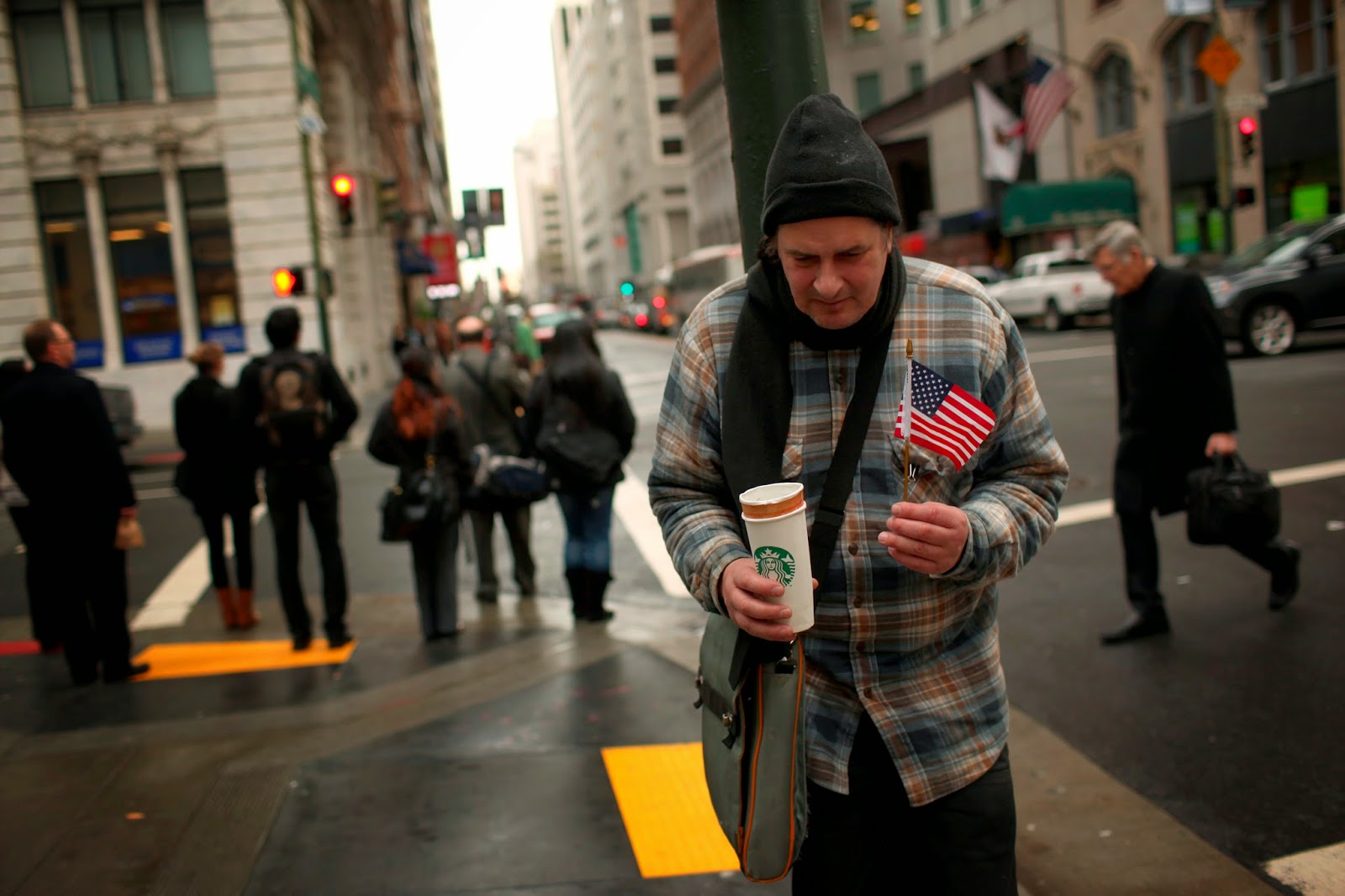 Several recent posts have raised the question, what would be needed to move US public policy towards a more equitable treatment of the bottom 75% of American society? Conditions for much of this super-majority of society have gradually declined in the past several decades, and public programs designed to ameliorate conditions of health, education, nutrition, and housing have come under severe attack from the right. Why have public policies turned away from active efforts towards improving the life conditions of the lower portion of society? And can we learn anything useful from international comparisons of attitudes on social welfare policies?

One key factor in understanding the politics of inequality in a country is the distribution of social attitudes across the population. How do Americans feel about government policies aimed at helping the less-well-off? How do we feel about the "social contract" that we have with each other over an economically, racially, and regionally diverse country?

The Pew Research Center has done a lot of research on this family of questions, and some recent results are summarized by Bruce Stokes in "Public Attitudes Toward the Next Social Contract" (link). Here are a few basic facts. The US spends a substantially lower share of its GDP on social expenditures than other OECD countries (19.4% versus 28.2% (Sweden) and 26.2% (Germany) (1)). And, as is now well familiar, wealth and income are highly unequal in the. US -- the top 1% gained 38.3% of all wealth growth in the US in the period 1983-2010, and the bottom 60% lost ground in wealth ownership (2).

So how do Americans feel about a social safety net? Consider this basic statement: "It is the responsibility of the government to take care for those who can't take care of themselves." A Pew Global Attitudes survey in 2007 found that 56% of Swedes and 52% of Germans strongly agreed with this statement, whereas only 28% of Americans as a whole strongly agreed with the statement (6). Moreover, this is one area where American society is most polarized. The percentage of people who identify as Republicans who agreed with a somewhat broader statement in 1987 was 62%; in 2012 this percentage had dropped to 36%. By contrast, Democrats have remained fairly constant in their support for this statement (75%).

Stokes closes with this summary statement:


Americans do have a social contract with each other and with their government. But this bond is currently under great strain. Americans' conflicting values and goals and deep partisan divisions over the specifics of the social safety net, along with worries about how to pay for it, suggest that the tensions surrounding the social contract will continue for some time. (13)

So how have American public attitudes about the key elements of the social safety net changed in the past fifteen years? Support has both polarized and declined. Here is a graph from the Pew study: 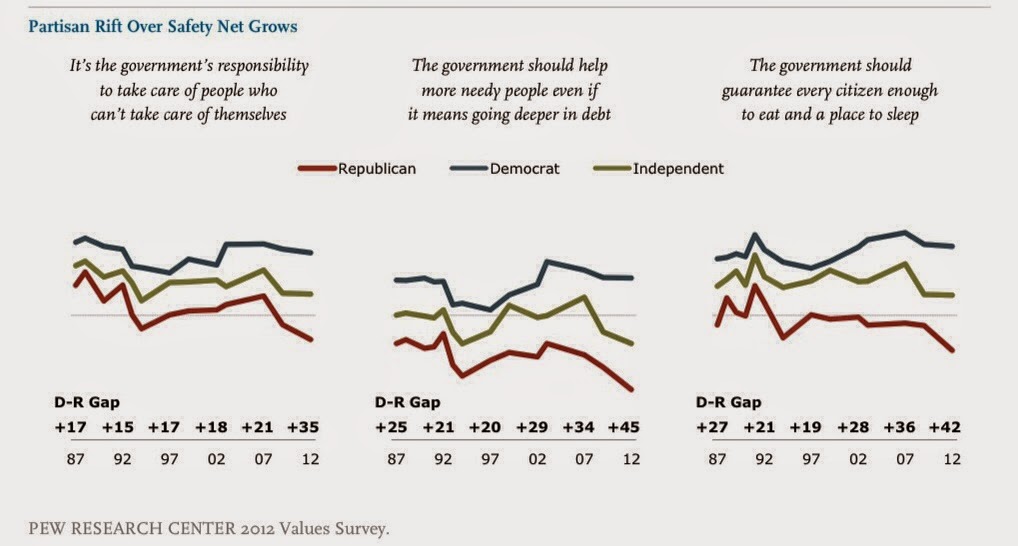 Now contrast this situation with that of Sweden. Stefan Svallfors provides an analysis of social attitudes in Sweden between 1981 and 2010, and he finds high and unwavering support for Sweden's extensive welfare state (link). His work is based on analysis of the Swedish Welfare State Surveys, replicated five times since 1981. Here is the most dramatic summary table. 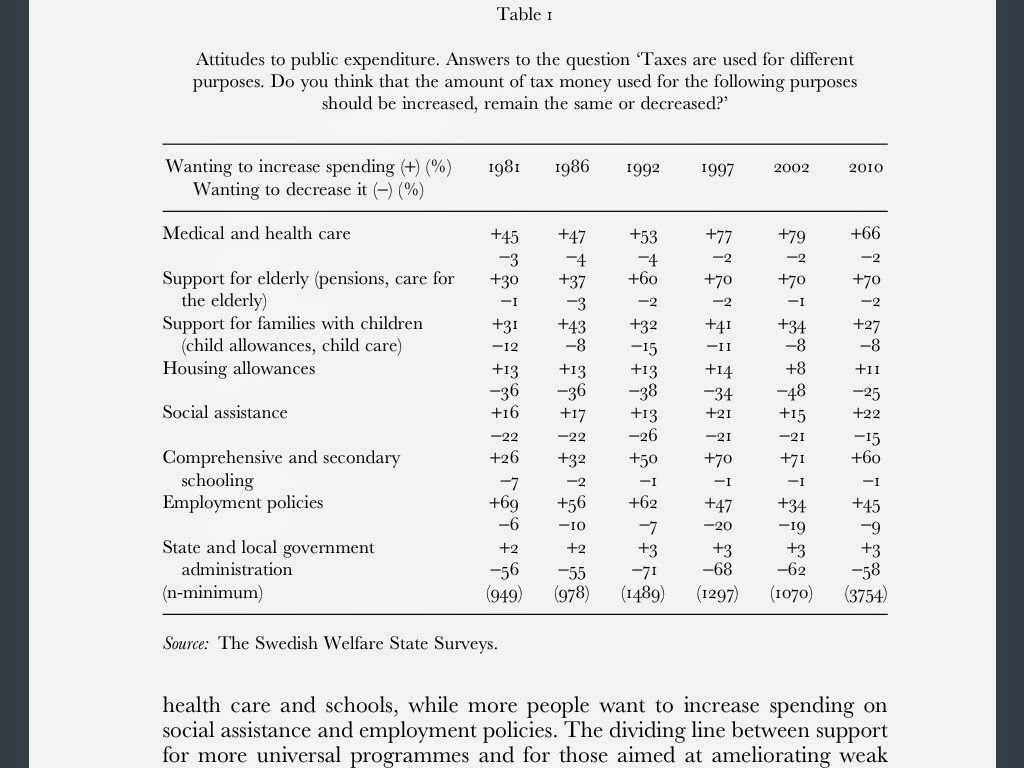 Support for additional public spending on health care increased from 45% to 66% in 2010. Increased support for the elderly went from 30% who favored additional public support to 70%. Support for more spending on schooling increased from 26% to 60%. And support for increasing social assistance went from 16% to 22%. What this documents is strong and rising support for using public moneys to provide public benefits to all members of Swedish society, poor and rich alike. And that in turn demonstrates a very strong commitment to the social contract. Here is Svallfors' conclusion:


In conclusion, what may be said about the state of Swedish attitudes towards the welfare state? First, there are absolutely no signs of any decreasing public support for welfare policies. Overall, there is a large degree of stability in attitudes, and where change is registered, it tends to go in the direction of increasing support. More people state their willingness to pay higher taxes for welfare policy purposes; more people want collective financing of welfare policies; and fewer people perceive extensive welfare abuse in 2010 than was the case in previous surveys. Class patterns change so that the salaried and the self-employed become more similar to workers in their attitudes. (819)

Finally, here is a summary of recent research on Swedish attitudes towards immigrants (link).


Here too the bonds of social solidarity remain strong. The summary finding is that Swedes strongly support their country's rising ethnic diversity. 74% of Swedes expressed a positive attitude towards rising ethnic diversity in 2013, up six points from the prior year. Unlike other European countries where rising nationalist parties are cultivating an ugly anti-immigrant politics, Swedish society is strongly supportive of the increases in diversity that it is witnessing.

These are striking data for both societies. People in the United States show significantly lower (and declining) support for the social safety net than in many other countries, while the Nordic populations have sustained and even increased their high level of support for these public programs. The difficult political question is this: what sorts of things need to happen in order to inflect American attitudes and values in a more positive direction when it comes to empathy and social solidarity?