Thelen on the prospects for egalitarian capitalism 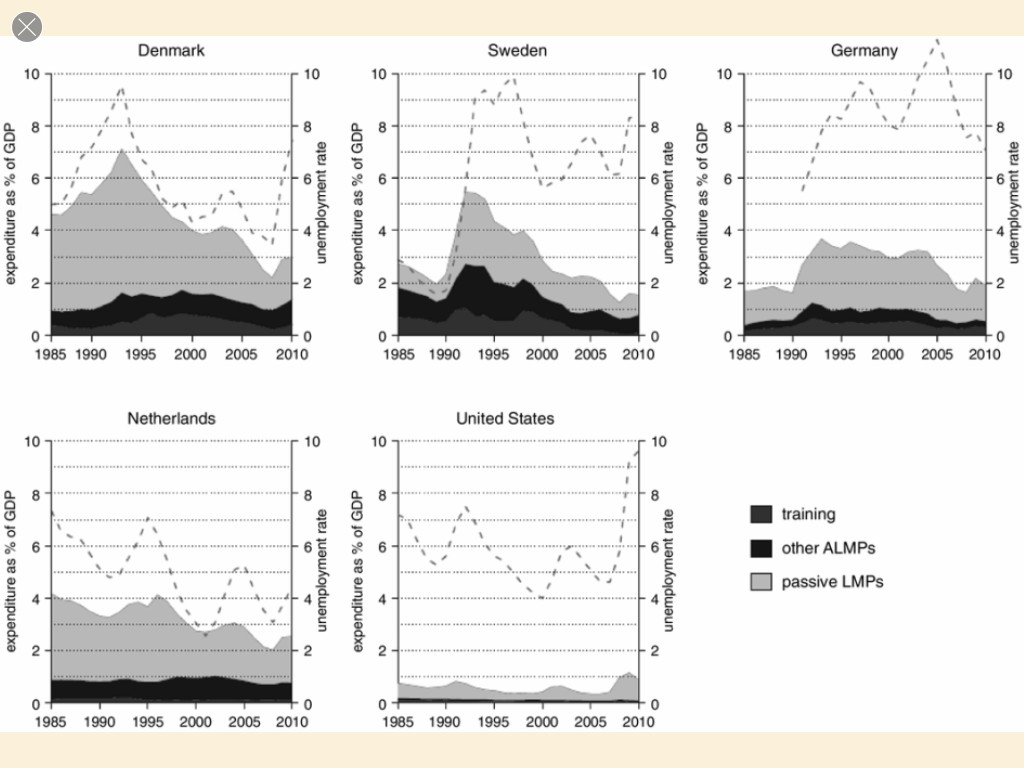 There is a version of economic historical thinking that we might label as "capitalist triumphalism" -- the idea that the institutions of a capitalist economy drive out all other economic forms, and that they tend towards an ever-more pure form of unconstrained market society. "Liberalization," deregulation, and reduction of social rights are seen as economically inevitable. On this view, the various ways in which some countries have tried to ameliorate the harsh consequences of unconstrained capitalism on the least well off in society are doomed -- the welfare state, social democracy, extensive labor rights, or universal basic income (link). Through a race to the bottom, any institutional reforms that impede the freedom and mobility of capital will be forced out by a combination of economic and political pressures.

The graphs above demonstrate the current structural differences among Denmark, Sweden, Germany, Netherlands, and USA when it comes to training and income support for the unemployed and underemployed. It is visible that the four European economies devote substantially greater resources to support for the unemployed than the United States. And on the triumphalist view, the states demonstrating more generous benefits for the less-well-off will inevitably converge towards the profile represented by the fifth panel, the United States.

Kathleen Thelen is a gifted historical sociologist who has studied the institutions of labor education and training throughout the past twenty years. Her book How Institutions Evolve: The Political Economy of Skills in Germany, Britain, the United States, and Japan is an important contribution to our understanding of these basic economic institutions, and it also sheds important light on the meta-issues of stability and change in important social institutions. With James Mahoney she also edited the valuable collection Explaining Institutional Change: Ambiguity, Agency, and Power on this topic.

Thelen's most recent book, Varieties of Liberalization and the New Politics of Social Solidarity addresses the question of capitalist triumphalism. (That isn't a term that she uses, but it seems descriptive.) She locates her analysis within the "varieties of capitalism" field of scholarship, which maintains that there is not a single pathway of development for capitalist systems. "Coordinated" capitalism and neoliberal capitalism represent two poles of the space considered by the VofC literature.


From the beginning, the VofC literature challenged the idea that contemporary market pressures would drive a convergence on a single best or most efficient model of capitalism. (kl 228)

Thelen is interested in assessing the prospects for what she calls "egalitarian" capitalism -- the variants of capitalist political economy that feature redistribution, social welfare, and significant policy support for the less-well-off. She focuses on several key institutions -- industrial relations, vocational education and training, and labor market institutions, and she argues that these are particularly central for the historical issue of the development of capitalism towards harsher or gentler versions.


Different varieties of liberalization occur under the auspices of different social coalitions, and this has huge implications for the distributive outcomes in which many of us are ultimately interested. (kl 243)

This point is key to her view of the plasticity and path-dependency of basic economic institutions: these institutions change as a result of economic imperatives and the strength of various social groups who are in a position to influence the form that change takes. "The conclusions I reach here are based on a view of institutions that emphasizes the political-coalitional basis on which they rest" (kl 259). But there is no simple calculus proceeding from power group to institutional outcome; instead, the results for institutional change are a dynamic consequence of strategy, coalition, and constraint.


I suggest that the institutions of egalitarian capitalism survive best not when they stably reproduce the politics and patterns of the Golden Era, but rather when they are reconfigured -- in both form and function -- on the basis of significantly new political support coalitions. (kl 330)

A key finding in Thelen's analysis is that "coordinated" capitalism and "egalitarian" capitalism are not the same. Coordinated capitalism corresponds to the models associated with social democracies of the 1950s and 1960s, the "Nordic" model. But Thelen holds that egalitarian capitalism can take more innovative and flexible forms and may be a more durable alternative to neoliberal capitalism.

Is a more "egalitarian" capitalism possible? The data on labor markets that Thelen presents shows that there are major differences across OECD economies when it comes to wage inequality. Here is a striking chart: 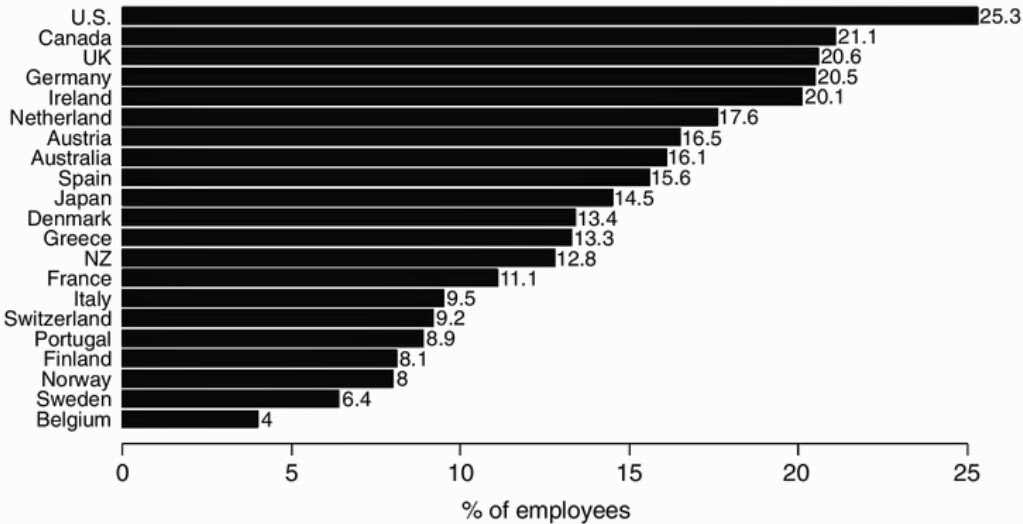 Fully a quarter of US workers are employed in low-wage work in 2010. This is about double the rate of Denmark and quadruple the rate of low-wage workers in Sweden. Plainly this reflects a US economy that is creating substantially greater numbers of low-income people than any other OECD country. And yet all of these countries are capitalist economies, some with rates of growth that are higher than the United States. This demonstrates that there are institutional and policy choices available that are consistent with the imperatives of a capitalist market economy and yet that give rise to more egalitarian outcomes than we observe in the US, Canada, and the UK.

A key element in common among the more egalitarian labor outcomes that Thelen studies (Netherlands, Denmark, Sweden, Germany) is the expansion of part-time work, mini-jobs, and "flexi-curity". This phenomenon reflects a combination of liberalization (relaxation of work rules and requirements of long labor contracts), with a set of arrangements that allows a smoother allocation of labor to jobs and an improvement in income and security for the lower end of the labor market. This trend is part of what Thelen calls a strategy of "embedded flexibilization", which she regards as the best hope for a pathway towards equitable capitalism.

Thelen closes with a realistic observation about the uncertain coalitional basis that is available in support of the policies of embedded flexibilization. Xenophobic tendencies in countries like the Netherlands and Denmark have the potential for destroying the social consensus that currently exists for this model, and the leaders of nationalistic anti-immigrant parties have made this a key to their efforts at political mobilization (kl 5541). Maintenance of these policies will require strong political efforts on the part of progressive coalitions in those countries, and organized labor is key to those efforts.

This analysis is deeply international and comparative, but it has an important consequence for the political economy of the United States: where are the coalitions that can help steer our economy towards a more egalitarian form of capitalism?

(Readers may be interested in an earlier discussion of the Nordic model; link.)