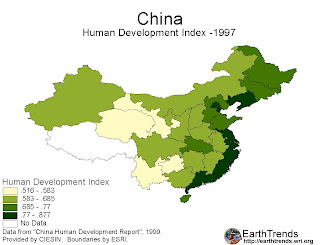 Allan Wheatley writes an important article in Reuters this week about the situation of rising income inequalities in China as part and parcel of the booming economic growth the country has witness for the past two decades.  Several key facts emerge from the piece: While spectacular affluence is emerging at the top end of China's economic hierarchy, 204 million people lived on less than $1.25 per day in 2005.  China's Gini coefficient of income inequality rose from 40.7 in 1993 to 47.4 in 2004, according to an Asian Development Bank report -- a remarkably steep and rapid rise.   (This compares to a Gini coefficient of income inequality in India of only 36.2.)  And inequalities of income between urban and rural people continue to rise.  Wheatley indicates that some experts believe that this phenomenon is the result of both rapid economic growth and a set of policies by the Chinese government that favor efficiency over equity.  And some experts believe that these rising inequalities are a significant source of risk for social stability in future decades.
Wheatley bases most of his article on the recent work of the World Bank's chief economist, Justin Yifu Lin, formerly a leading professor at Peking University.  Lin and colleagues have published a collection of papers titled China's Dilemma, which attempts to identify the economic policies that have resulted in this sustained rise in income inequality.  (The volume was co-published by Australian National University and Asian Pacific Press and the table of contents is available online.)  As Wheatley summarizes the findings, the Chinese government's policies concerning economic growth have favored "efficiency" and corporations over "equity" and workers.  And Lin argues that state policies actually protect and subsidize corporations, resulting in a massive transfer of wealth and income to the most affluent.
All of this suggests to me the importance of returning to some of the important discussions of poverty and growth that were so dynamic in the 1970s.  Development theorists such as Hollis Chenery (Redistribution with Growth

) gave careful analysis to the institutional context of economic growth, and put forward a strong argument for the idea that poverty alleviation needs to be built into the growth strategy from the beginning.  Both focused their attention on the institutions through which income is generated -- largely property holdings in land for peasants -- and argued that redistribution of property entitlements needed to be a structural feature of equitable economic growth.
It was neglect, not factual or policy weakness, that led to the eclipsing of this line of thought in development circles and World Bank thinking.  The Washington Consensus essentially put aside the idea that there are alternative pathways of economic growth, some of which are more favorable to equity than others.
China's current theory of economic development seems closer to neo-liberal orthodoxy than it does to a progressive "poor-first" policy mix that would have the most sustained impact on China's poor.
(There is more discussion of the poverty-first approach to development thinking in an unpublished paper on my research site, Putting the Poor First.)
Posted by Dan Little at 1:27 PM