Safety as a social effect 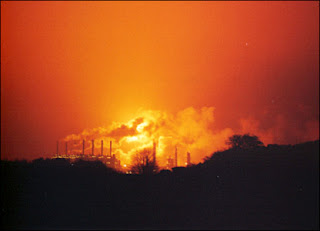 Some organizations pose large safety issues for the public because of the technologies and processes they encompass. Industrial factories, chemical and nuclear plants, farms, mines, and aviation all represent sectors where safety issues are critically important because of the inherent risks of the processes they involve. However, "safety" is not primarily a technological characteristic; instead, it is an aggregate outcome that depends as much on the social organization and management of the processes involved as it does on the technologies they employ. (See an earlier posting on technology failure.)

We can define safety by relating it to the concept of "harmful incident". A harmful incident is an occurrence that leads to injury or death of one or more persons. Safety is a relative concept, in that it involves analysis and comparison of the frequencies of harmful incidents relative to some measure of the volume of activity. If the claim is made that interstate highways are safer than county roads, this amounts to the assertion that there are fewer accidents per vehicle-mile on the former than the latter. If it is held that commercial aviation is safer than automobile transportation, this amounts to the claim that there are fewer harms per passenger-mile in air travel than auto travel. And if it is observed that the computer assembly industry is safer than the mining industry, this can be understood to mean that there are fewer harms per person-day in the one sector than the other. (We might give a parallel analysis of the concept of a healthy workplace.)

This analysis highlights two dimensions of industrial safety: the inherent capacity for creating harms associated with the technology and processes in use (heavy machinery, blasting, and uncertain tunnel stability in mining, in contrast to a computer and a red pencil on the editorial offices of a newspaper), and the processes and systems that are in place to guard against harm. The first set of factors is roughly "technological," while the second set is social and organizational.

Variations in safety records across industries and across sites within a given industry provide an excellent tool for analyzing the effects of various institutional arrangements. It is often possible to pinpoint a crucial difference in organization -- supervision, training, internal procedures, inspection protocols, etc. -- that can account for a high accident rate in one factory and a low rate in an otherwise similar factory in a different state.

One of the most important findings of safety engineering is that organization and culture play critical roles in enhancing the safety characteristics of a given activity -- that is to say, safety is strongly influenced by social factors that define and organize the behaviors of workers, users, or managers. (See Charles Perrow, Normal Accidents: Living with High-Risk Technologies

, for a couple of excellent treatments of the sociological dimensions of safety.)

This isn't to say that only social factors can influence safety performance within an activity or industry. In fact, a central effort by safety engineers involves modifying the technology or process so as to remove the source of harm completely -- what we might call "passive" safety. So, for example, if it is possible to design a nuclear reactor in such a way that a loss of coolant leads automatically to shutdown of the fission reaction, then we have designed out of the system the possibility of catastrophic meltdown and escape of radioactive material. This might be called "design for soft landings".

However, most safety experts agree that the social and organizational characteristics of the dangerous activity are the most common causes of bad safety performance. Poor supervision and inspection of maintenance operations leads to mechanical failures, potentially harming workers or the public. A workplace culture that discourages disclosure of unsafe conditions makes the likelihood of accidental harm much greater. A communications system that permits ambiguous or unclear messages to occur can lead to air crashes and wrong-site surgeries.

This brings us at last to the point of this posting: the observation that safety data in a variety of industries and locations permit us to probe organizational features and their effects with quite a bit of precision. This is a place where institutions and organizations make a big difference in observable outcomes; safety is a consequence of a specific combination of technology, behaviors, and organizational practices. This is a good opportunity for combining comparative and statistical research methods in support of causal inquiry, and it invites us to probe for the social mechanisms that underlie the patterns of high or low safety performance that we discover.

Consider one example. Suppose we are interested in discovering some of the determinants of safety records in deep mining operations. We might approach the question from several points of view.

Investigations along these lines can establish an empirical basis for judging that one or more organizational features A, B, C have consequences for safety performance. In order to be confident in these judgments, however, we need to supplement the empirical analysis with a theory of the mechanisms through which features like A, B, C influence behavior in such a way as to make accidents more or less likely.

Safety, then, seems to be a good area of investigation for researchers within the general framework of the new institutionalism, because the effects of institutional and organizational differences emerge as observable differences in the rates of accidents in comparable industrial settings. (See Mary Brinton and Victor Nee, The New Institutionalism in Sociology

, for a collection of essays on this approach.)