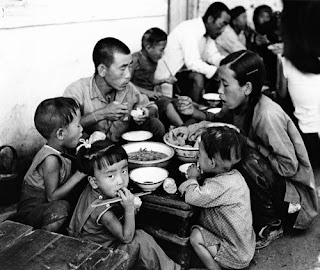 It is worth reflecting a bit on how absolutely tumultuous China's history has been since the Communist Revolution in 1949. The Great Leap Forward and consequent famine -- 1958-60, in excess of 20 million famine deaths. The Cultural Revolution -- 1966-1976, in excess of 1.5 million deaths by violence, many times that number of maimed and ruined lives. The Democracy movement and Tiananmen Square and its dramatic suppression -- 1989, unknown thousands of victims. And since the early 1980s, economic reforms, rapid growth, and a substantial degree of social transformation.

If you consider these events in terms of age cohorts, the historical experience of almost every generation has been a traumatic one. Chinese men and women born in 1930 were teenagers during the Revolution and experienced famine, chaos, civil violence, and economic reform in the remainder of their lives. The generation born in 1950 experienced the GLF famine as children, they were the teen-aged militants in middle school who formed the Red Guards, they experienced years of rustication in the countryside in the 1970s, they returned to universities after the end of the Cultural Revolution in 1976, they participated in or observed the tumult of Tiananmen Square as they approached their forties, and they participated in China's economic reforms in their forties and fifties. This is my own age cohort in the United States, and I am just amazed to consider the rapidity and depth of history this generation has lived through.

The children of the 1950 generation were born in 1970. These children largely escaped the violence of the Cultural Revolution. Tiananmen Square was a reality for them in their teens. Their generation has been at the center of the dynamism of entrepreneurial China, with broadened opportunities in education and business. They have some of the expertise and comfort with the Internet that allows them to bridge to the China if the twenty-first century. And their standard of living -- for urban people anyway -- is dramatically improved over that of the previous generation.

And of course the generation of 1990 is the youth generation of today. This is the generation that will set China's course for the next half century, and it appears to be quite different from previous cohorts. In a conversation with four graduate students at Tsinghua University I gained a very vivid sense of the generational change that is occurring today. Three were born in 1980 and one was born five years later. I asked them about some of the values and cultural expectations of young Chinese people. The three older students laughed and said, "we don't understand him at all! Even the music he likes makes no sense to us."

These generations surely created vastly different mentalities for themselves -- different ideas about politics, equality, morality, and social stability. The ideologies of each generation were shaped and burned by the super-heated political struggles through which they passed. And surely their thoughts about what China should become, what standards of fairness should be respected, and how they should live their lives, are very deeply affected by their generational experiences.