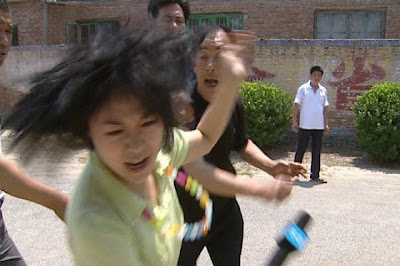 China’s Communist Revolution was founded upon the idea of equality. It was a basic principle of the early Communist Party that inequalities ought to be eradicated and the power and privilege of elite groups should be dismantled. Today in China the situation is very different. Farmers and rural people no longer have the support of the central state in their grievances against powerful forces — land developers, factory owners, power companies. And economic and social inequalities have increased dramatically in China — inequalities between the rural population and the city population, between manual workers and professionals, between eastern-coastal regions and western regions (link). Small numbers of elites are able to capture wealth-creating opportunities; the separation between wealthy and poor widens; and often the political power of office permits self-aggrandizement within China’s burgeoning economy. The situation of small farmers and of internal migrant factory workers is particularly bad, by all accounts; see Anita Chan, China's Workers Under Assault: The Exploitation of Labor in a Globalizing Economy.

Paradoxically, these facts about widening inequalities serve to point out something surprising: the sometimes narrow limits to the power of central state and party institutions -- a point that Vivienne Shue made in The Reach of the State Sketches of the Chinese Body Politic

. Regional and local officials are often able to undertake actions and policies that are directly harmful to poor people and directly contrary to central policies — and the central government is unable to reign them in. There are some deliberate policy efforts from the central state to improve the conditions of rural people — as a class and as a region of disadvantaged population. But those policies have often had little effect; the benefits that were intended to redress inequalities wind up in the hands of more elite actors -- often private developers rather than public officials (link).

So how do Chinese people think about these facts — facts that are even more visible to them than to outsiders? Recent research seems to point out a generational difference with regards to the “sense of justice” that Chinese people bring to their perceptions of the society. Older people appear to have shaped a set of ideas about social justice under the Mao years that lead them to judge today’s visible inequalities very unfavorably. Younger people seem to be more accepting of inequalities — if they are earned. What is most morally offensive to younger people seems to be the fact that privilege of position allows some people to do much better than others -- from access to education to access to high-paying jobs. Whether this is a function of corruption, cronyism, or the use of state and party power for personal gain — younger people seem to be very offended at these sorts of inequalities. Here is a Pew Global Attitudes Project survey released in July 2008; inequality and corruption rank high among sources of dissatisfaction in this survey. (C. K. Lee’s pathbreaking work on the sociology of law and justice makes these points very clearly. See some of her related work in Against the Law: Labor Protests in China’s Rustbelt and Sunbelt

; here is a link to a recent article by Lee on "rights activism in China".)

What should we think about China’s social future if these sorts of inequalities of opportunity and outcome continue to widen? Several points are worth considering.

First, persistent deprivation and inequality is certainly a contributing cause of social contention. So China’s current inability to redress these inequalities probably suggests a continuation of the pattern of social protest in China. (Tens of thousands of incidents of collective protest and resistance take place every year in China — and the rate appears to be rising; link.)

Second, the fact that China’s state institutions haven’t been able to regulate the local mechanisms of abuse of poor people (through property confiscations, for example) also suggests the likelihood of rising social contention. Confiscations are a leading cause of protest.

And third, a set of meaningful reforms in legal protections for all members of society, including secure property rights for farmers and labor rights for workers, would surely create an environment that is more acceptable to the younger people who are accepting of inequalities if they have arisen through processes that are procedurally fair and legitimate. So a more law-governed future for China, in which economic activity is regulated by a fair system of law, and a set of opportunities are available to make something like a level playing field, would appear to be the most sustainable course for China’s leaders to attempt to achieve.

Interestingly, these are exactly the sorts of reforms that are front and center in the recent Charter '08 petition.
Posted by Dan Little at 11:36 AM