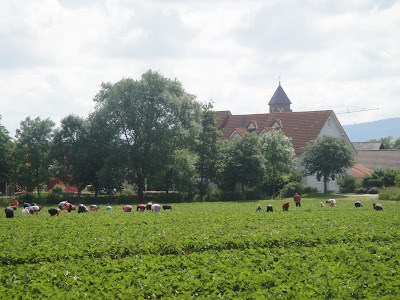 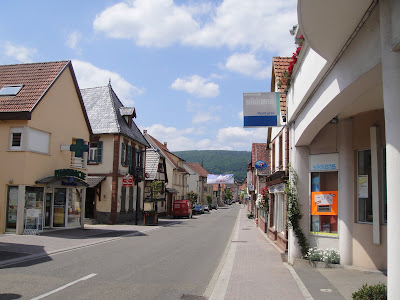 It may seem like a strange question: What is Alsace? It is a region of France. It is a culturally and linguistically distinct population of 1.8 million people. Most visitors would observe that there is a distinctive Alsatian style in life, in architecture, and in culture. It possesses one great city (Strasbourg), many middle-sized cities (Hagenau, Wissembourg, Colmar), and hundreds of small villages. It is a beautiful collection of landscapes, villages, fields, forests, and vineyards. It is the homeland of Hansi and Marc Bloch. It is a region that has suffered acutely in warfare -- eastern Alsace was the site of most of the battles of the Franco-Prussian War in 1870, and it was the site of the final stages of the Battle of the Bulge and the German counteroffensive, Northwind, with intense tank fighting and destruction in dozens of villages. The sufferings of World War II are still remembered by the octagenarians. It is a border culture, with influences from Germany and France establishing aspects of culture and social attitudes over several centuries. And there is always choucroute, kougelhopf, and Kronenberg. In short, Alsace has a history and a set of traditions that set its people apart.

So from the point of view of travel-writing, the question has an easy answer. But the social reality is more complex and fluid. The social reality of Alsace today is highly heterogeneous, within and across villages, towns, and cities. And ongoing processes of nation-building and globalization raise the question of its cultural survival.

Take the issue of language. Stop into any grocery store or hospital in rural Alsace and you will find elderly people gossiping and talking in Alsatian. For many of these people Alsatian was their native language; for some it remained their only language. But the situation is different if you pause to watch boys playing ball in the public square; their chatter is in French -- or sometimes Arabic. So it is an open question whether the Alsatian language community will remain a vital one, or whether it will retreat into the archives. Current estimates indicate that fewer than 10 percent of children in Alsace are fluent in Alsatian. So the question arises, whether the language will reproduce itself into the the next several generations.

Or consider folkloric customs and cuisine -- the colorful costumes and dancing that are still very much a part of village festivals. How long will these customs survive in an age of mass-based entertainment and a homogenizing media culture? How are the customs transmitted across generations? How long can tarte flambée persist as an Alsatian specialty in the face of an onslaught by Pizza Hut?

And how about the distinctive modes of class relations that you find in Alsace -- the ways in which the local bourgeoisie dress and interact with each other, and how they relate to other social strata -- farmers, bus drivers, shop clerks? In what ways are these class relations distinct from those of Bourgogne? And how distinct are they from their counterparts in the United States?

More fundamentally, consider the range of contemporary social problems that Alsace faces, in both its cities and its villages: drug use, youth unemployment and disaffection, hooliganism, poorly assimilated immigrant communities. How will Strasbourg or Hagenau deal with these problems? And will "Alsace" remain? Or will the national strategies of social services, public policy, and legislation lead to a more socially uniform Alsace -- just a quaint set of historical markers on the autoroute?

So really, the question posed here has two distinct parts, both very interesting. The first is historical: what were the rich pathways of culture formation through which Alsace came to be Alsace? How did this particular mix of values, attitudes, modes of behavior, language, and culture come together?

The second part of the question is forward-looking: where is Alsace going? Will it preserve its cultural distinctiveness and its language? Or will it become simply another interchangeable part of France and the world? How much staying power does a traditional culture have in the face of the impulses of nation-building, mass communication, and globalization of consumption that the contemporary world imposes?

These questions are interesting in consideration of Alsace. But they are even more interesting in the context of thinking about globalization itself. Is it possible for local and regional cultures to successfully negotiate the challenges of the twenty-first century in ways that permit the survival of their cultural uniqueness? Or is the global world of the future destined to look more like a very large shopping mall, with the same foods, clothes, and ethics everywhere?
Posted by Dan Little at 8:23 AM

Good luck with this path of inquiry.

The issue of what effect a "small world" has on cultures is a bottomless one.

Cultures, like species, disappear over time. Marking these changes may be all that can be done, but is important nonetheless.

As one who lives here (Wissembourg), a good observation. It is, however, this complex structure of contradictions which are the region's strength and tenacity.