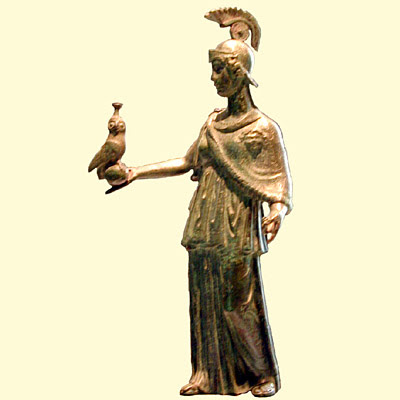 Image: the owl of Minerva
In spite of their reputations as historical determinists, Hegel and Marx each had their own versions of skepticism about "learning from history" -- in particular, the possibility of predicting the future based on historical knowledge. Notwithstanding his view that history embodies reason, Hegel is famous for his idea in the Philosophy of Right: "When philosophy paints its grey in grey then has a shape of life grown old. By philosophy's grey in grey it cannot be rejuvenated but only understood. The owl of Minerva spreads its wings only with the falling of dusk." And Marx puts the point more sardonically in the Eighteenth Brumaire: "Hegel remarks somewhere that all great world-historic facts and personages appear, so to speak, twice. He forgot to add: the first time as tragedy, the second time as farce." Both, then, cast specific doubt on the idea that history presents us with general patterns that can be projected into the future. Marx's remarks to Vera Zasulich about the prospects for communist revolution in Russia are instructive: "I thus expressly limited the 'historical inevitability' of this process to the countries of Western Europe."

This is a view I agree with very profoundly: history is contingent, there are always alternative pathways that might have been taken, and history has no general plan. So -- no grand predictions in history.

But then we have to ask a different sort of question. Specifically -- what kinds of predictions or projections are possible in history? And what is the intellectual base of grounded historical predictions? Here are a few predictions that seem to be supportable, drawn from recent postings on UnderstandingSociety:
Several things are apparent when we consider these predictions. First, they are limited in scope; they are small-scale features of the historical drama. Second, they depend on specific and identifiable social circumstances, along with clear ideas about social mechanisms connecting the present to the fruture. Third, they are at least by implication probabilistic; they indicate likelihoods rather than inevitabilities. Fourth, they imply the existence of ceteris paribus conditions: "Absent intervening factors, such-and-so is likely to occur." But, finally, they all appear to be intellectually justifiable. They may not be true, but they can be grounded in an empirically and historically justified analysis of the mechanisms that produce social change, and a model projecting the future effects of those mechanisms in combination.

The heart of prediction is our ability to identify dynamic processes and mechanisms that are at work in the present, and our ability to project their effects into the future. Modest predictions are those that single out fairly humdrum current processes in specific detail, and derive some expectations about how these processes will play out in the relatively short run. Grand predictions, on the other hand, purport to discover wide and encompassing patterns of development and then to extrapolate their civilizational consequences over a very long period. A modest prediction about China is the expectation that labor protest will intensify over the next ten years. A grand prediction about China is that it will become the dominant economic and military superpower of the late twenty-first century. We can have a fair degree of confidence in the first type of prediction; whereas there are vastly too many possible branches in history, too many "countervailing tendencies," too many accidents and contingencies, that may occur to give us any confidence in the latter prediction.

Ceteris paribus conditions are unavoidable in formulating historical expectations about the future, because social change is inherently complex and multi-causal. So even if it is case that a given process, accurately described in the present, creates a tendency for a certain kind of result -- it remains the case that there may well be other processes at work that will offset this result. The tendency of powerful agents to seize opportunities for enhancing their wealth through processes of urban development implies a certain kind of urban geography in the future; but this outcome might be offset by a genuinely robust and sustained citizens' movement at the city council level.

The idea that historical predictions are generally probabilistic is partly a consequence of the fact of the existence of unknown ceteris paribus conditions. But it is also, more fundamentally, a consequence of the fact that social causation itself is almost always probabilistic. If we say that rising conflict over important resources (X) is a cause of inter-group violence (Y), we don't mean that X is necessarily followed by Y; instead, we mean that X raises the likelihood of the occurrence of Y.

So two conclusions seem justified. First, there is a perfectly valid intellectual role for making historical predictions. But these need to be modest predictions: limited in scope, closely tied to theories of existing social mechanisms, and accompanied by ceteris paribus conditions. And second, grand predictions should be treated with great suspicion. At their best, they depend on identifying a few existing mechanisms and processes; but the fact of multi-causal historical change, the fact of the compounding of uncertainties, and the fact of the unpredictability of complex systems should all make us dubious about large and immodest claims about the future. For the big answers, we really have to wait for the owl of Minerva to spread her wings.
Posted by Dan Little at 4:26 AM