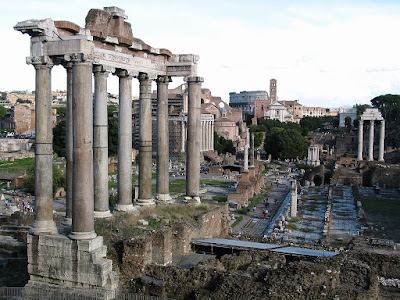 When large historical events occur, we often want to know the causes that brought them about. And we often look at the world as if these causes too ought to be large, identifiable historical factors or forces. Big outcomes ought to have big, simple causes.

But what if sometimes the historical reality is significantly different from this picture? What if the causes of some "world-historical events" are themselves small, granular, gradual, and cumulative? What if there is no satisfyingly simple and macro answer to the question, why did Rome fall? Or why did the American civil war take the course it did? Or why did North Africa not develop a major Mediterranean economy and trading system? What if, instead, the best we can do in some of these cases is to identify a swarm of independent, small-scale processes and contingencies that eventually produced the outcome?

Take the fall of Rome. I suppose it is possible that the collapse of the empire resulted from a myriad of very different contingencies and organizational features in different parts of the empire: say, logistical difficulties in supplying armies in the German winter, particularly stubborn local resistance in Palestine, administrative decay in Roman Britain, population pressure in Egypt, and a particularly inept series of commanders in Gaul. Too many moving pieces, too much entropy, and some bad luck in personnel decisions, and administrative and military collapse ensues. Alaric sits in Rome.

What an account like this decidedly lacks, is a story about a few key systemic or environmental factors that made collapse "inevitable". Instead, the account is a dense survey of dozens or hundreds of small factors, separated in time and place, whose cumulative but contingent effect was the observed collapse of Rome. No simple necessity here -- "Rome collapsed because of fatal flaw X or environmental pressure Y" -- but instead a careful, granulated assessment of many small and solvable factors.

But here is a different possible historical account of the fall of Rome. An empire depends upon a few key organizational systems: a system of taxation, a system of effective far-flung military power, and a system of local administration in the various parts of the empire. We can take it as a given that the locals will resent imperial taxation, military presence, and governance. So there is a constant pressure against imperial institutions at each locus -- fiscal, military, and administrative. In order to maintain its grip on imperial power, Rome needed to continually support and revitalize its core functions. If taxation capacity slips, the other functions erode as well; but slippage in military capacity in turn undermines the other two functions. And now we're ready for a satisfyingly simple and systemic explanation of the fall of Rome: there was a gradual erosion of administrative competence that led to increasingly devastating failures in the central functions of taxation, military control, and local administration. Eventually this permitted catastrophic military failure in response to a fairly routine challenge. Administrative decline caused the fall of Rome.

I don't know whether either of these stories -- the "many small causes" story or the "systemic administrative failure" story -- is historically credible. But either could be historically accurate. And this is enough to establish the central point: we should not presuppose what the eventual historical explanation will look like.

I suppose there is no reason to expect apriori that large events will conform to either model. It may be that some great events do in fact result from a small number of large causes, while others do not. So the point here is one about the need to expand our historical imaginations, and not to permit our quest for simplicity and generality to obscure the possibility of complexity, granularity, and specificity when it comes to historical causation.

(Christopher Kelly's The Roman Empire: A Very Short Introduction is a very readable treatment of Rome's functioning as an empire. Kelly hands off the ball to Gibbon when it comes to explaining the fall of Rome, however (History of the Decline and Fall of the Roman Empire

-- as Kelly says, decidedly not a "short history"). Michael Mann's The Sources of Social Power: Volume 1, A History of Power from the Beginning to AD 1760

gives something of the flavor of my "administrative decline" musing above. Likewise, the style of reasoning about revenues and coercion is very sympathetic to Charles Tilly's arguments about a somewhat later period in Coercion, Capital and European States: AD 990 - 1992

Interesting post... what I think you're lacking, though, is that the truth is almost certainly in between the possibilities that you present. Let's consider the 2nd Punic War (call it the "2PW") for a moment. Firstly, we can view the eventual defeat of Carthage in the 2PW as the inevitable result of Cathage's loss in the 1PW. If Rome and Cathage were evenly matched at the beginning of that war, then the fact that Rome entered the 2PW objectively stronger and Carthage entered objectively weaker than we need nothing else to explain the outcome.

Except that's not all there is to the story... Hannibal almost single-handedly won the war. Of course, the Romans may have exaggerated the exploits and prowess of Hannibal (much as we Americans tend to exaggerate the exploits of OBL). Still Hannibal's heroic efforts to win the war argues strongly for the proposition that single events and even single individuals (singularities) can drastically alter the course of history.

Should Hannibal, hurling his spear at the gates of Rome forever be a symbol of the powerlessness of the individual to alter the inevitable flows of History, or should his brilliant victory at Cannae teach us that individual actions can have profound consequences. I think the truth is that Hannibal could have won if a little luck had gone his way. A bumper crop in the Hills surrounding Rome may have allowed Hannibal to extend his Siege, perhaps indefinitely. The power gap between Rome and Carthage required more skill and more luck in order for Hannibal to come out on top, but the power gap couldn't eliminate the possibility.

The systemic movers of History (the power gap) speak to our human need to craft theories and understand the world. Singularities speak to our need for Heroes. I think balancing these two forces as we try to understand what has happened in the past gets us somewhere close to the truth.