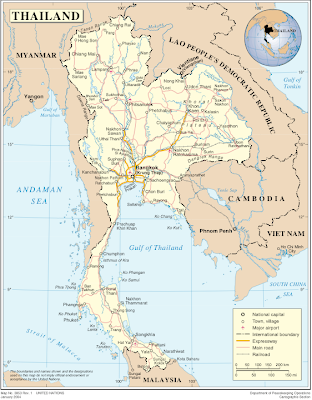 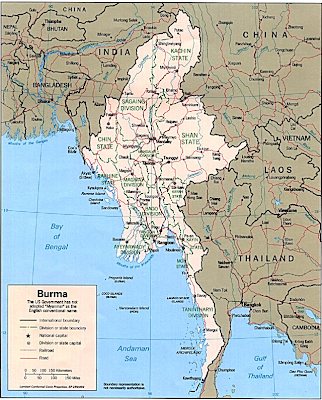 Quite a few of the items included in the UnderstandingSociety twitter feed currently refer to events and conditions in Southeast Asia -- especially Burma, Malaysia, and Thailand. This posting introduces a dynamic map that I'll try to update with new feed items as they occur when it is possible to identify a specific location. It is possible to change the frame and scale of the Google map, and if you click on the pointers you'll find a link to the associated news item. Here is a direct link to the map, and it will remain accessible in the sidebar as well.

I have also provided static maps that indicate the provinces and cities of Burma and Thailand.

The integrative power of Google Maps is pretty striking in this example. If you go to the "larger map" through the link above, it is possible to turn on several other layers of the map, including photos, videos, wikipedia articles, and webcams. These are photos and videos that users have posted with geo-tags, so that they are associated with their locations on the Google map. This resource will become vastly deeper over time, as more and more users tag their photos and videos spatially. There are currently very dramatic photos available on the web of Karen refugees passing across the Burma-Thai border near the village of Noh Bo. These photos aren't geotagged at present, but one would expect that it won't be long before the user could expand the map around this key area of conflict; zoom in to find the geo-tagged photos and videos that are associated; and gain a much more vivid understanding of the current reality in the region.

This effort at linking a selected stream of news stories about Southeast Asia with their locations across the region contributes to the overall goal of UnderstandingSociety in a fairly basic way: it's an experiment in trying to organize and synthesize the hundreds of news items and events that can be observed through the twitter stream, into something that is a more structured presentation of part of the social reality of a country or region.

Several important issues are in the twitter feed at present:
Is this a good way of making spatial sense of the news items about what is happening in Burma, Malaysia, and Thailand?
Posted by Dan Little at 7:00 PM