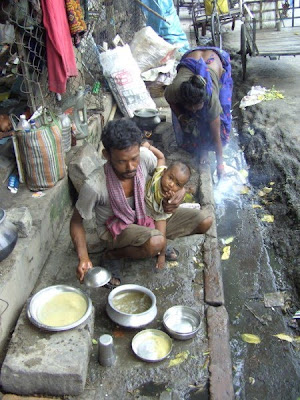 Traditional neoclassical economics has missed the mark quite a bit in the past two years. There is the financial and banking crisis, of course; neoclassical economists haven't exactly succeeded in explaining or "post-dicting" the crisis and recession through which we've traveled over the past year and more. But perhaps more fundamentally, neoclassical economics has failed to provide a basis for understanding the nuance and range of our economic institutions -- nationally or globally. Contemporary academic economics selects a pretty narrow range of questions as being legitimate subjects for economists to study; so topics such as hunger, labor unions, alternative economic institutions, and the history of economic thought generally get fairly short shrift. Don't expect to see the perspectives of Steven Marglin or Samuel Bowles in Economics 101 in most U.S. universities! The profession has a pretty narrow conception of what "economics" is.

And yet, when intelligent citizens think about the key problems of economics in a broader sense -- the problems that we really care about, the problems that will really influence our quality of life -- we certainly think of something broader than the mathematics of supply and demand or the solution of a general equilibrium model. We're ultimately not as interested in the formalisms of market equilibrium as we are in an analysis of the institutions that define the context of economic activity. We want to know more about the ways in which features of economic organization and the basic institutions of our economy influence individual behavior; we are curious about how our institutions create distributive outcomes that fundamentally affect people's lives differently across social groups. We would like to have a clearer understanding of some of the ways that non-economic factors -- race, gender, age, city -- influence people's economic outcomes. We want to know how the institutions and incentives defined by our economic system bring about effects on the natural environment. And we are often curious about how it might be possible to reform our basic economic institutions in ways that are more favorable to human development. In other words, we are often brought to think along the lines of some of the great dissenters in the economics tradition -- Polanyi, Dobb, Marx, Sen, McCloskey, and Dasgupta (An Inquiry into Well-Being and Destitution

), for example. (In a very contemporary and topical way, Richard Florida takes on a lot of these issues; see his blog, the Creative Class.)

It is therefore pleasing to find that some publishers like Routledge are bringing out serious academic works in what they refer to as "social economics". The Routledge series, Advances in Social Economics, has a list of titles representing recent work that is rigorous and insightful but that explores other points of the compass within the field of political economy. I certainly hope that university libraries around the world are paying attention to this series; these are titles that can add a lot to the debate.

One book in the series in particular catches my eye. My colleague Bruce Pietrykowski raises an important set of "alternative" economic issues in his recent book, The Political Economy of Consumer Behavior: Contesting Consumption

. (Here is a preview of the book from Routledge.) The book is a valuable contribution and very much worth reading.

Pietrykowski has two intertwined goals in the book. First, he wants to provide a broader basis for understanding consumer behavior and psychology than is presupposed by orthodox economists. And second, he wants to help contribute to a broader understanding of the scope, methods, and content of political economy than is provided by mainstream economics departments today.

Here is his preliminary statement of his goal:

I argue that in order to arrive at a more compelling account of consumer behavior we need to transform the discipline of economics by opening up the borders between economics and sociology, geography, feminist social theory, science studies and cultural studies. (2)

The fact of consumption is a crucial economic reality in any economy. How do individuals make choices about what and how to consume? Pietrykowski makes the point that consumption behavior shows enormous heterogeneity across groups defined in terms of ethnicity, gender, region, and time -- a point made here as well (post). So a single abstraction representing the universal consumer won't do the job. The standard economic assumption of the rationally self-interested consumer with consistent and complete preference rankings is seriously inadequate; instead, we need to develop a more nuanced set of views about the psychological and social factors that influence consumer preferences and choices.

So it is important to develop alternative theoretical tools in terms of which to analyze consumer psychology. Here Pietrykowski draws on ideas from Karl Marx (fetishism of commodities), Amartya Sen, and other political economists who have attempted to provide "thick" descriptions of economic behavior. The point here is not that we cannot usefully investigate and theorize about consumer behavior; rather, Pietrykowski is looking for an analytical approach that operates at the "middle range" between complete formal abstraction and the writing of many individual biographies.

Second, Pietrykowski is interested in contributing to a "re-mapping" of the knowledge system of economic thought, by exploring some of the alternative constructions that have been bypassed by the profession since World War II. (These arguments are largely developed in Chapter Two.) Pietrykowski begins with the assumption that the discipline and profession of economics is itself socially constructed and contingent; it took shape in response to a fairly specific set of theoretical and methodological ideas, it was subject to a variety of social and political pressures, and there were viable alternatives at every turn. Here is how he formulates the social construction perspective:

The claim that economic knowledge is socially constructed allows for an understanding of the field as the outcome of interpretation, negotiation and contestation over the constituents of economic knowledge and the legitimacy of particular practices, methods, and techniques of analysis. (19)

Like Marion Fourcade, Pietrykowski argues that there is a great deal of path dependence in the development of economics as a discipline and profession; and there are identifiable turning points where we can judge with confidence that themes that were eliminated at a certain time would have led to a substantially different intellectual system had they persisted. Pietrykowski's analysis of the fifty years of development of professional economics in the first half of the twentieth century is a very nice contribution to a contemporary history of science, and very compatible with Fourcade's important work in Economists and Societies: Discipline and Profession in the United States, Britain, and France, 1890s to 1990s

The discipline of "home economics" in the 1920s and 1930s is the example that Pietrykowski examines in detail. "This task ... of defining economics as a distinct professional discipline involved both recruitment and exclusion" (28). Here is how Pietrykowski describes home economics:

Departments of home economics were quite diverse in the early twentieth century. Commonly associated with maintaining and preserving the cult of domesticity, home economics programs emerged from multiple sources including progressive political reform of public health, labor conditions, and household management. (35)

And, of course, home economics did not long remain a part of the professional discipline of economics. Pietrykowski looks in detail at the way in which home economics developed as an academic discipline at Cornell University; and he documents some ways in which the discipline of economics was constructed in a gendered way to exclude this way of understanding scientific economics: "The decision was made that women involved in the emerging field of home economics were to be excluded from the AEA.... Economics was to be concerned neither with women's activities in the home nor with women's activities in the workplace" (28-29).

Pietrykowski develops his full analysis of consumption by focusing on three heterodox approaches to understanding consumption: home economics and feminist analysis, psychological and behavioral research on consumer behavior (George Katona), and Fordism and the theory of mass consumption. He also gives some attention to the emerging importance of experimental economics as a tool for better understanding real economic decision-making and behavior (20-25).

After discussing these heterodox theories, Pietrykowski illustrates the value of the broader framework by examining three fascinating cases of consumption: the complex motivations that bring consumers to purchase the Toyota Prius, the motivations behind the Slow Food movement, and the choice that people in some communities have to engage in a system of alternative currency. These are each substantial examples of arenas where consumers are choosing products in ways that make it plain that their choices are influenced by culture, values, and commitments no less than calculations of utilities and preferences.

Between the theories and the cases, Pietrykowski offers a remarkably rich rethinking of how people choose to consume. He makes real sense of the idea that consumption is socially constructed (drawing sometimes on the social construction of technology (SCOT) literature). He demonstrates that models based on the theory of the universal consumer are not likely to fit well with actual economic outcomes. And he makes a strong and persuasive case for the need for academic economics to expand its horizons.

I find it interesting to notice that Pietrykowski's account of the ascendency of neoclassical economics since the 1950s converges closely with prior postings on positivist philosophy of science. One of the explicit appeals made by neoclassical economists was a methodological argument: they argued that their deductive, formal, and axiomatic treatments of economic fundamentals were more "scientific" than case studies and thick descriptions of economic behavior. So many of the failings of mainstream economic thought today can be traced to the shortcomings of the positivist program for the social sciences that was articulated in the middle of the twentieth century.
Posted by Dan Little at 8:19 PM

Interesting line of research. Consumption by individuals has a very strong cultural component. Choice of food, clothing, music and many other purchases are influenced by culture and the cultural identity of the individual. Some jobs are identified with culture and within that culture are behaviors that may facilitate some employment strategies and inhibit others. For example, how people learn to deal with credit has a strong cultural component.

This is older than "Cain and Abel", the parable about the split between agrarian culture and herding culture. In modern industrial society, there are cultures that facilitate manufacturing employment, service employment, independent business, etc. While our education system is designed to teach some employment strategies, the culture and individual cultural experiences are an alternative source of knowledge and behavior. Societal friction occurs when behaviors promoted by some cultures are no longer a successful strategy because the economic and social environment has changed. Many models ignore cultural factors and that leads to faulty conclusions.