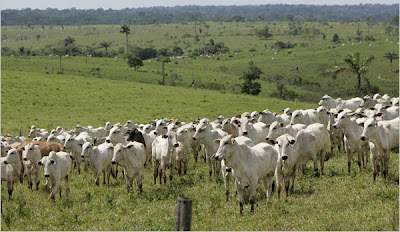 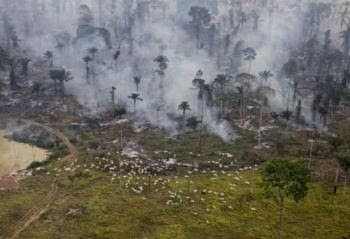 The extent and depth of poverty in the world today is a crushing and immediate problem. The economies of most countries in the world continue to reproduce life circumstances for the extremely poor that make it all but impossible for them to participate in normal, productive lives. The Millenium development goals that were endorsed by the United Nations and other national and international organizations are still far from realization (link). At least a billion people in Asia, Africa, and Latin America live in extreme poverty (defined by the United Nations as per capita income less than a dollar a day), and a larger number are subject to hunger and malnutrition. This is an accumulation of misery and despair that cannot be tolerated. (Here's an earlier post on food security and hunger.)

So poverty alleviation must be a crucial and high priority. Nations and regions need to give their strongest efforts to enacting economic and social reforms that consistently work in the direction of reducing the scope of poverty and increasing the degree of human fulfillment that is feasible in the world. Jeffrey Sachs (The End of Poverty: Economic Possibilities for Our Time

), and Paul Collier (The Bottom Billion: Why the Poorest Countries are Failing and What Can Be Done About It

) have all made good contributions on the pressing urgency of this issue and some ideas about strategies that can work.

Poverty alleviation can be understood to mean a variety of things: ensuring that families have higher disposable income, ensuring that families have access to the goods necessary to satisfy their basic needs; or creating social safety nets that help to provide the means of health, nutrition, and education that are fundamental to improving the productivity of the poor. And all of this implies two important consequences: the world economy needs to grow consistently for a very long time, and the purchasing power of the poorest 40% of the world's population needs to increase more rapidly than the growth rate. Overall inequalities need to decline as economic growth proceeds. Getting out of poverty means, among other things, having access to more of society's resources for the sake of consumption: better diet, healthcare, education, transportation, housing, clothing, and other goods. And this is critically important, because as Amartya Sen has argued throughout his career, poverty obliterates human potential and opportunity. It destroys the individual's "capabilities and functionings" for life.

Now consider the environmental side of the coin. Sustainability means designing a social and economic system that is eventually ... sustainable. It means using non-renewable resources in a way that permits future generations to have the ability to achieve the things they will need to do; it means using renewable resources in ways that permit replacement; it means managing water and air quality in such a way that we're not locked into a downward spiral of worsening quality in these essential resources; and, of course, it means managing human activity in ways that permit control of global climate change. People like James Gustave Speth (The Bridge at the Edge of the World: Capitalism, the Environment, and Crossing from Crisis to Sustainability

) have argued that these goals can only be met by damping down the consumption patterns of the world's affluent billion (post). But how will that work for the world's poorest billion?

Here is the hard point, however: the goals of poverty alleviation and sustainability appear on their face to be inconsistent. If we want global poverty alleviation, then it is hard to see how we can have a sustainable economy in the next fifty years; and if we insist on sustainability, then it is hard to see how we can achieve enduring and improving poverty alleviation. It appears inescapable that if we succeed in doubling the real income of the poorest 40% of the world's population, this means even greater increases in the consumption of energy and other resources. And the production of energy is the primary cause of failures of sustainability. If part of alleviating poverty in China or India means making it feasible for three times as many poor families to own a motorbike or automobile -- this implies a significant increase in the consumption of fossil fuels and the production of greenhouse gases. And yet improving mobility is an important cause and benefit of alleviating poverty. And this is true for a wide range of categories of products: being less poor means having the ability to consume more of these products.

Here is a hypothetical effort to think through the consequences of alleviating poverty for aggregate consumption of various resources from my The Paradox of Wealth and Poverty: Mapping the Ethical Dilemmas of Global Development 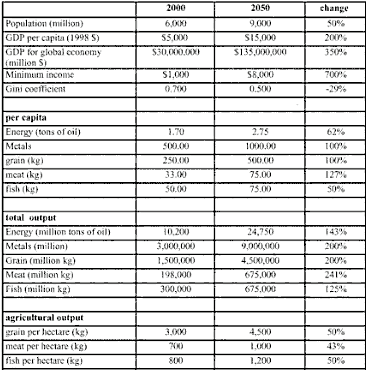 This isn't a rigorously developed model; it simply makes some basic assumptions about current and future consumption levels for the world's population and then aggregates them for the full population. It is generally recognized, for example, that there is something like a "nutrition transition" that occurs as income rises for poor people, as they have the ability to substitute more meat and fish for grains and vegetables in their diet. But this implies a disproportionate increase in the amount of farmland dedicated to livestock. And globally, this implies a reduction in forests and grasslands -- processes already underway in Central and South America -- which has major consequences for CO2 increases and species extinction. Likewise, this impressionistic projection implies a tripling of the consumption of metals and grain; more than tripling of meat consumption; and 2.4 times the level of energy consumption. So it seems that poverty alleviation all but guarantees that the demand for environment-stressing commodities will increase significantly more rapidly than population increase.

So here is the key question: are there pathways for increasing the quality of life of the world's poorest 40% that are also compatible with reaching a sustainable global environment? The forthcoming World Bank 2010 World Development Report focuses on climate change, and there should be some important new ideas there about how to combine poverty alleviation and sustainability. These are the hardest problems we face today, and we need some fresh ideas.
Posted by Dan Little at 11:43 PM