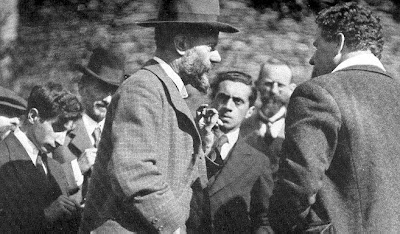 Is it possible to say anything useful and general about the subject matter and scope of sociology? Could we say, for example, that sociology is the discipline that uses empirical methods to arrive at hypotheses and theories about major social groups, social processes, and social patterns? Or does a definition like this suffer from both too much abstraction and too much specificity?

This isn't necessarily a question a working sociologist would ask him- or herself. But it is a good question for a philosopher of the social sciences, and possibly for a critical observer of the history and current practice of sociology as well. Essentially, the question is this: what do we want from a science of sociology? What should a good sociological theory accomplish? What standards should be used in assessing the success of a sociological theory?

Why do I say that working sociologists have no special reason to be interested in the question? Because normally a sociologist has already located him- or herself in a specific research field; has already mastered a set of research methods and strategies; has already picked out some key examples of interesting sociological problems for research. This has happened through graduate education, the influence of mentors, the practices and content of key journals, and the researcher's own intellectual and theoretical development. So the working sociologist doesn't need to ask the foundational questions; a range of mid-level research questions and methods already fills that need. This is related to the point that Thomas Kuhn (The Structure of Scientific Revolutions

), and Imre Lakatos (The Methodology of Scientific Research Programmes

) made about physics: the practicing physicist exists with a paradigm or a research tradition that defines the topics and methods that the researcher pursues. And we don't have to go the whole way with Kuhn in thinking that scientific traditions are inherently incommensurable or that the concepts and methods of a paradigm fundamentally prevent the scientist from perceiving the world differently, in order to recognize the practical truth of his description of scientific training: science is a practical cognitive activity, defined by assumptions and practices that are specific to a research tradition. Demographers, phenomenological sociologists, and comparative researchers would all answer the question, "What is sociology?", quite differently.

The critical observer of current scientific work can take a different perspective. He/she can attempt to survey the many sub-disciplines and discover some interesting trends about the ambitions of the current generation of sociologists; the critical observer can attempt to identify areas of important innovation, new conceptual breakthroughs, and new ways of formulating research questions. Craig Calhoun (Contemporary Sociological Theory

), Mayer Zald (Sociology as a discipline: Quasi-science and quasi-humanities

) are particularly gifted at this, and in each case they shed some new light on the intellectual ambitions and innovations that are possible in defining contemporary sociological inquiry. On this approach, the observer is in a position to take the measure of the social sciences as they are actually developing, capturing the diversity of approaches as well, perhaps, as some common threads of empirical and theoretical reasoning.

Philosophers are interested in considering general questions like these because it reflects a basic intellectual strategy with a long tradition in philosophy: to attempt to formulate a description or definition of a certain kind of intellectual pursuit, and then to consider the means through which this goal might be satisfied. So if we wanted to raise the question, which ethical theory is best?, a philosopher might well begin by asking: what intellectual and practical role does ethical theory play? And what standards of evaluation are appropriate for comparing the strengths and weaknesses of different ethical theories (Kantianism, Aristotelianism, utilitarianism, ...)? The arguments would then turn on the merits of one or another specification of the roles and standards of ethical theories that the various participants advance, rather than the specific characteristics of the ethical theories under review.

Once we raise the general question about the subject matter of sociology, it seems clear that sociology is in fact an eclectic domain of knowledge with numerous definitions of scope and content. So trying to reduce the intellectual role of the discipline to a single kind of knowledge and subject matter is stifling. Instead, we probably need to simply recognize that there is a range of legitimate foundational definitions for studies of society, and a range of views about what makes such studies "scientific". Max Weber (pictured above) formulated a vast range of sociological work, reflecting a fairly coherent underlying set of assumptions about science, explanation, and conceptualization. And this implicit philosophy of social science was significantly different from those embedded in the empirical and conceptual practices of Emile Durkheim or Louis Wirth. So it might be best to simply acknowledge that the "whole" of sociology is a mix of intellectual approaches and modes of reasoning, rather than a single coherent and systematic enterprise.
Posted by Dan Little at 9:28 AM

And then there's the question of advocacy, which may be overt and political, or deeply embedded in the choice and design of a research program. One may argued that nothing uniquely credentials social scientists to establish rather than report on normative construct.

For all its attractions, I find this view to be unsatisfying. For if we can show the linkages and commonalities between different programs, then we are in a strong position to explore even more new vantage points. Analogously, if Sherlock Holmes discovers that only 85% of the outside surface area of a house can be assigned to known space within the house, then he will have good reason to believe that there is a secret room in there somewhere taking up the extra 15%.

It is clear enough that there are two forms of sociology, the critical and the descriptive.

Descriptive forms of sociology investigate demography, organizational theory, network theory, and social psychology. Their purpose is to make sense of the clean facts: behaviors, beliefs, attitudes, places. While they make use of "social constructs" and meaningful interpretations in the most trivial senses of the phrases, they attribute social functions to these things sparingly, and can never pretend to take things like ideology and society for granted. Meanwhile, the critical theorist is interested in attributing social functions to behaviors, attitudes, and so on, and in doing this in such a way that their own investigations can be open to critique.

Among critical theorists, the facts are rather quite dirty. In a very general sense, I would include Marx, Parsons, Weber, Marcuse, and Foucault in the same camp. For Marx, the means of production were the essential feature of social explanation. For Parsons, the primary focus was social action. For Weber and the American Pragmatists, it was interaction. For the saner members of the Frankfurt School, it was true and false needs. For Foucault, it was power and sanity.

A first step would be to show the commonalities between the kinds of disparate projects in the critical realm. The second step would be to connect that common element to the work being done by the stewards of clean facts that do descriptive sociology.