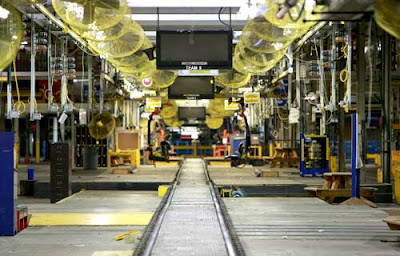 Other Midwestern manufacturing states also had significant job losses during the period. Ohio lost 9.8% of its 4,840,000 jobs since 2000, and Illinois lost 6.6% of its 5,205,000 jobs since 2000. But Michigan's losses dwarf every other state by a large margin. Among the fifty states and the District of Columbia there were winners and losers; 25 states gained private sector jobs during these years, with Texas the big winner (700,000 new jobs). Altogether 1,952,000 new jobs were created in 25 states and 3,207,000 jobs were lost in 25 states and DC. But consider this: fully 24% of all private sector job losses nation-wide occurred in Michigan during this time period. Think of that: one out of four of all private-sector job losses in the country during these years occurred in one state, Michigan. This could reasonably be called a one-state depression. It is as if a slow-moving Katrina had hit the state, and no one noticed.

So what is needed in order for Michigan to regain its economic wellbeing?

Plainly a 20-30% unemployment rate is unacceptable. So if the state maintains its current population, then the communities, businesses, and government of the state need to stimulate substantial job growth. And we can put some numbers on this obvious truth. If the population remains constant then it would take eight years for the state to recover to the 2000 level if jobs grow at 3% per year. And this would require the creation of about 100,000 new private sector jobs each year.

What would be needed in order to get to 100,000 new jobs per year in Michigan? Here is one pathway: succeed in attracting or creating --
That gets us to 106,000 new jobs. And it means creating or attracting two large firms, almost 2,000 small and medium businesses, and expanding another 2,000 small businesses. And this needs to happen every year for eight years.

Is this feasible? Is it possible for a state of about 10 million people to create new businesses and jobs on this scale? That is the crucial question for the state of Michigan. And there are many organizations and incubators devoted to this goal in the state of Michigan -- Ann Arbor SPARK, TechTown, Automation Alley, Detroit Renaissance, Michigan Economic Development Corporation, and the Detroit Regional Chamber, to name a few. Further, the universities are doing everything possible to help provide the talented graduates and the new innovations that will be needed for the creation of successful new businesses. But ultimately it is very hard to see how this kind of business creation and job growth can occur year after year.

So Michigan's problem is also a crucial challenge for the nation as a whole. The plain truth is that Michigan has born the largest burden of the decline of manufacturing jobs in the past decade, and the solutions may be beyond the grasp of the state itself. This situation may require intelligent and substantial Federal solutions.
Posted by Dan Little at 2:12 PM

Pete - your maps would be very interesting, except that I have a floating 'ads by Google' blanketing the eastern side of the state. How do I get rid of that? I can shrink the scale, so that the floater covers Lake Erie and part of Huron, and I can move the map to the left, but it would be nice to view the whole state at once, in a reasonable scale. Any suggestions?

very sad indeed, good luck to anyone is searching for a job.

I have been out of Michigan since 2003, when I found a job in my technical field in a rural part of far southern Illinois and couldn't find one in Michigan.

Being born and raised in Michigan and having seen the recessions of the 1970's and 1980's, I have long held that Michigan is what the country is - only more.

When the national economy is booming, Michigan rides on top. When it's busting, Michigan IS the bottom. Let me explain.

The four pillars of the Michigan economy are: (1) Automobiles; (2) Office Furniture; (3) Tourism; and (4) Agriculture.

Agriculture lives and dies by the weather, and nothing much shakes it economically. People have to eat. Sure, wine country may dip a bit but the rest is pretty inelastic. The other three, however, are all "good times" business.

When times are good, people replace old cars with new ones. Businesses hire people and need places to put them. Consumer confidence tours and travels on credit.

We've seen it before, and we'll see it again. Michigan needs more business that's not *as* subject to the whims of mood. Autos and Office Furniture are big-ticket industries. We need more small-ticket, non-luxury industry. I nkow, that's been going overseas, but we need to recover it. They're working on bio-tech R&D, but how about attracting companies like Nanosolar and other companies that are rapidly lowering the cost of alternative energies? Michigan needs to be in on that boom and the sustainable maintenance market that follows.

I'd like to add one other thing about tourism. I once met a man from Australia on the Lake Michigan shore. He described the area as "one of the ten best beaches in the world." Yet many foreign beach-tourists don't bring their money into Michigan. When the global recovery takes hold, however, Europeans and others will still stay away (and go to Florida and California instead) because basic freedoms they take for granted in their homelands will get them arrested and possibly deported in Michigan. I'm talking about topfree and clothing-optional beaches. The DNR and legislature need to let LOCAL jurisdictions decide if this is a way they want to attract business. If the Great Lakes cruise industry is ever to really take hold, it's going to need a few of these beaches as ports of call. Foreign tourists expect it.

Very interesting. It sucks there are no jobs =\.