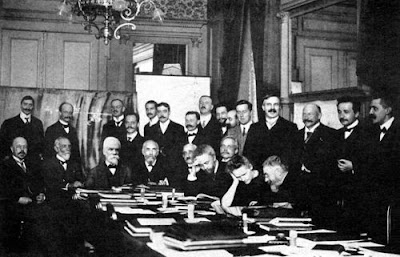 Fritz Ringer's The Decline of the German Mandarins: The German Academic Community, 1890-1933

is a key source on the content and social location of German academic and intellectual culture in a crucial period of its development, 1870-1933. The book appeared in German in 1967, and it presents a detailed intellectual and institutional history of the issues and actors.  The concept of mandarin is Ringer's shorthand for "influential educated elite."  Humanistically educated in a system that emphasized literature, classical languages, and philosophy, the mandarins played the role of the educated and powerful elites of late nineteenth-century Germany, as officials, professors, and other highly educated professionals.  These were men of letters who played key roles in German social and political life.  Ringer concentrates on one important segment of this elite group: Germany's professors and university leaders, primarily in the humanities and social sciences.  And Ringer's central finding is that there was a highly distinctive mentality and set of social emotions that pervaded this group, and these ideas and emotions had dramatic consequences both for the nature of their theories and the direction of their political behavior as Germany's crisis deepened in the twentieth century.

Ringer's approach differs from other more internalist conceptions of intellectual history in several important respects.  First, he gives a great deal of attention to the social and political context of German academic culture, essentially implying a significant degree of social causation of thought.  And second, he tries to understand much of the thinking and action of this group in terms of a set of shared emotions towards the present and towards German culture.  He identifies the rapid processes of economic change, industrialization, and political upheavals as being key sources of impetus for the sense of intellectual upheaval that pervaded the period.  And the most important current of social emotion that he highlights is a progression from enthusiasm for a Romantic conception of education, to a profound pessimism and malaise about the current and future prospects for German culture in the face of mass democratization of society.

One way of reading this approach is to say that Ringer is functioning as a sociologist rather than strictly as an historian in his analysis of this period of intellectual history.  What makes Ringer's analysis sociological is his effort to locate the social position of the mandarin intellectual within a theory of comparative social and political development of early modern societies. His way of approaching the task recalls that of Karl Mannheim or Max Weber himself: situating an intellectual tradition within a broad and pervasive set of social circumstances. This approach leads to an understanding of a particular social segment -- the mandarin -- that is highly sensitive to changing social conditions: "Thus all will go well for the mandarins until economic conditions around them change radically enough to introduce powerful new groups upon the social scene" (12).

Key to the development of academic culture is the educational system, and Ringer shows how different Germany's educational institutions were from other European nations.  He provides a detailed treatment of the evolution of German educational institutions during the nineteenth century, including especially the elite gymnasium and the university. His treatment demonstrates how elite academic culture and the associated institutions incorporated the romantic and idealist strains of philosophy and literature through the theory of Bildung, or personal intellectual development.  The cultivation of the individual is the central goal of education. (This assumption has some similarity to the theory of liberal learning mentioned in an earlier post; but current ideas about liberal learning do not insist on a sharp separation between intellectual and practical activities.)

Ringer also documents the very sharp forms of social stratification that these educational institutions created within German society, particularly towards the end of the nineteenth century. So the academic elites were separated from the rest of society by the exclusive institutions through which they were educated and by an academic philosophy that was contemptuous of practical or utilitarian skills. The mandarins were defensive of German high culture, and they were hostile to the social processes of industrialization and democratization that seemed to threaten that culture.

Another distinctive feature of Ringer's treatment is his interest in providing a psychological account of how Germany's circumstances shaped the values and goals of its intellectual class. Contrasting "logical", "traditional", and "ideological" explanations of beliefs, he argues that German intellectuals were shaped by their "emotional group preferences" (4).  Ringer attempts to explain quite a bit of the development of social theory during this period in terms of the fit between a given theoretical position and the emotional perspective of the mandarin on current history.

Ringer's interpretations of the thoughts and values of these German intellectuals display a fascinating combination of assumptions about sources of influence on the character of an intellectual's thought. First, there is the fact of situatedness and limited perspective.  Ringer often characterizes a thinker's choices of theories and topics in terms of the unquestioned background assumptions of this particular historically situated group. The person who grows up surrounded by the unlimited, flat horizons of Illinois will probably think differently from the one who experienced the mountain villages of the Alps since childhood -- and likewise with unquestioned social verities that differ from epoch to epoch.  Second, there is the factor of self-interest. The mandarins favored a particular theory of education because it supported their positions of distinction within the university. And finally, of course, there is logic and the rational development of a particular line of thought. Ringer's presentation of Weber's exploration of the concept of the Protestant ethic is a case in point.

The first kind of intellectual influence is unconscious and invisible. The second is closer to being conscious to the thinker. And the third is analytical and intentional on the part of the thinker. These frameworks bear some analogy to the three perspectives mentioned above --  "logical", "traditional", and "ideological" explanations. But the correspondence is not exact. We might say that the three perspectives correspond to the three different ideas about how thought corresponds to the world: that thought reflects social reality; thought advocates for social position; and thought interrogates social reality. Ringer echoes this in his coda on Weber by suggesting that Weber was able to transcend the limitations of perspective and interest to some degree, permitting him to exercise some independent critical intelligence:


Max Weber and a few other leading social scientists in the modernist camp hold a special place in the intellectual history of the mandarin community.  They apparently shared some of the emotions with which the majority of their colleagues viewed the social transformations of their time.  But their intellectual response to these changes far surpassed the orthodox norm in subtlety, critical control, and precision.  Though never without a certain pessimism, they put their ambivalence at the service of analysis.  They became at least partly conscious of their own situation. (180)


What is particularly tragic in Ringer's account is how poorly this mandarin culture prepared universities and academics for the onslaught of National Socialism and antisemitism in the 1930s.  The nostalgia and pessimism that were the dominant themes of the mandarin social psychology left intellectuals unequipped for the struggle against fascism within the university and within German society.  Their ideas and emotions left them ready for "conservative revolution" during the Weimar period, and provided no positive basis for mobilizing society against fascism when the time came.


These differences of tone and emphasis played a role in the political struggles of the early 1930's, in which the National Socialists triumphed over their rivals among the enemies of the Republic. ...  Most academics realized at last that this was not the spiritual revolution they had sought.  It was too violent and too vulgar.  It declared itself the master of geist, not its servant. ...  The wrote in defense of historical continuity and tradition, as if they sensed that the minimal restraints of civilization were under attack.  Their tone was one of helplessness and pessimism.  In 1931 Karl Jaspers warned of a coming abyss of individual nullity and unfreedom.  Typically enough, he regarded the mass and machine age as the ultimate source of the approaching disaster. (436-7)


As a bit of contrast it is worth reading Arthur Koestler's autobiography, The Invisible Writing, in which he describes his experience as a radical journalist in Berlin in the early 1930s.  Koestler describes his own experience and that of other politicized European intellectuals in the face of the rise of National Socialism.  These too were intellectuals; but they were intellectuals who clearly perceived the deadly threat presented by the Nazi rise to power, and they were willing to fight.


Throughout the long, stifling summer of 1932 we fought our ding-dong battles with the Nazis.  Hardly a day passed without one or two being killed in Berlin.  The main battlefields were the bierstuben, the smoky little taverns of the working-class districts....  Among the Communist intellectuals who were prominent in pre-Nazi Berlin, my favourite was Hans Eisler, the composer.  His family belonged to the high Comintern aristocracy and deserves a brief description.  (29, 48)