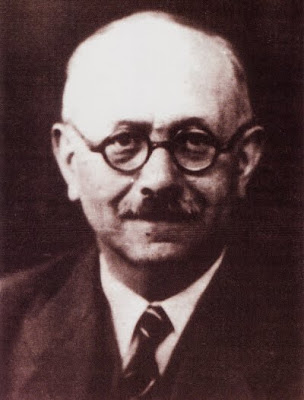 Marc Bloch was one of the twentieth century's most important and pathbreaking historians.  Several features of his work are particularly important: his attention to the specifics of medieval economic institutions, his interest in historically specific customs and practices, and his interest in uncovering the social and technical characteristics of medieval agriculture.  He helped to define contemporary social history and economic history.  (See an earlier post on Bloch's historical writings.)  Somehow Bloch developed a way of thinking about the history of France that deeply incorporated some of the mental frameworks of the emerging social sciences -- geography and sociology, for example -- at a time when mainstream French history was still very much driven by the chronicling of events and personages. As a discipline, history in France was very specifically defined in terms of its definition of subject matter and historical method, and Bloch's historiography challenged some very important pillars of this framework.  Along with Lucien Febvre he created the intellectual impetus that led to several generations of deeply innovative historical research within the Annales school.  So it is an interesting question for the sociology of knowledge to trace out some of the influences that were present in the 1890s and 1900s in French intellectual life that propelled Bloch's development.  (The topic has some parallels to an earlier posting on "The history of sociology as sociology.")

provides an excellent and detailed study of the intellectual and academic context in which Bloch's development occurred. (The book is also available in a much more affordable Kindle edition, and here is a link to the Google Books version.)  Friedman documents a major methodological debate, extended over roughly the decade surrounding 1903, concerning the relevance of geography and sociology to academic history.  The debate was in part intellectual -- how should the new ideas emerging from these social-science disciplines be incorporated into history?  But it was also institutional: how should the new disciplines of geography and sociology be represented within the university and the qualification system?  The École Normale Supérieure (ENS), the Collège de France, and the Sorbonne and their students and faculty played crucial roles throughout the debates.  The key figures in these debates were Durkheim and his followers, including especially François Simiand; Vidal and the young scholars who wanted to extend Vidal's ideas of human geography; and the defenders of traditional French historiography, centered around Charles Seignobos.  (Interestingly enough, Marc Bloch's father, Gustave Bloch, was an important voice on the side of history in this debate.)

Friedman sets up the institutional context of the French university (and the process of reform that was underway) at roughly the turn of the twentieth century, and she skillfully and knowledgeably traces through the intellectual debates and networks that provided the context to Bloch's development.  The book is of great value for any reader wanting to come to a better knowledge of the intellectual and institutional currents that shaped French intellectual life in the early twentieth century -- and particularly valuable if we are interested in learning more about the micro-development of Durkheimian sociology.  The book offers a detailed account of the development of the Durkheimian school of sociology and the approach to "human geography" championed by Paul Vidal de la Blache, and the controversies that arose between both schools and mainstream history.  (Here is a summary description of Vidal's theories of human geography and parallel thinking by Friedrich Ratzel.)

The central divides in these debates have a strikingly contemporary sound to them.  Main themes included:
In reading Friedman's account of these debates, it is tempting to consider which positions were the most productive in the long term.  The Durkheimians' insistence on the autonomy of social facts, their inflexible holism, and their insistence on discovering general social laws all seem like mis-steps from the contemporary point of view.  They leave little room for social contingency and variation across social circumstances; and they leave no room whatsoever for an "agent-centered" approach to social and historical explanation.  Given these shortcomings, it is perhaps a good thing that the Durkheimians never fully dominated the history profession.  The Vidalians -- the human geographers -- seem like an improvement in each of these respects.  Their approach emphasizes regional variation; they are eclectic in their openness to a variety of types of historical causes; and they emphasize the crucial importance of paying attention in detail to the particulars of a case.  Their weakness, however, is a relative lack of attention to the specifics of social institutions.  But best of all is the historian who learns something from each perspective but then constructs his own intellectual framework for the historical setting of interest to him.

And in fact, this latter position seems to be the one that Bloch took.  Friedman argues that Bloch's historical sensibilities and methods were deeply influenced by these debates among the historians, sociologists, and geographers; but that ultimately his thinking remains "historical."


Even in his later years when he came closest to Durkheimian sociology, Marc Bloch remained essentially an historian.  He was an historian in the sense that his primary interests lay in change and differences rather than laws and theory and that the problems which he chose to address were human ones rather than those of the physical environment. (chapter 10)


It is interesting to observe that the writings of Marx and the ideas of historical materialism do not come into this story at any point.  These currents do not appear to have played a significant role in the academic debates over the future of French history in 1900.  Friedman observes that Bloch was impressed by Marx.  She notes that he wrote to Febvre "that he was considering using Marx to bring some 'fresh air into the Sorbonne' and that though he suspected that Marx was a 'poor philosopher' and probably also an 'unbearable man,' Marx was without a doubt a great historian" (Kindle loc 223-35).  But there is no indication in this book about what role Marx's writings played in his development. And even the statement about being a "great historian" is somewhat mysterious, since the bulk of Marx's work was plainly theoretical and immersed in political economy rather than historical research and narrative.  (See an earlier posting on primitive accumulation and a posting on Marx's strengths and weaknesses as an historian.)
Posted by Dan Little at 9:24 AM