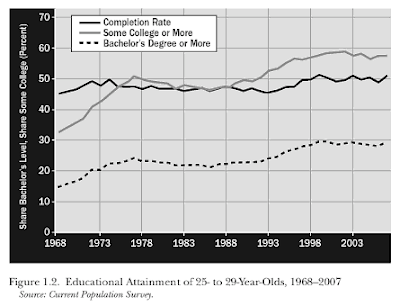 For quite a long time the United States had a global advantage in its educated population. No more. The US now ranks low among OECD nations for percentage of adults with a baccalaureate degree. And the increases in this percentage witnessed in the United States in the 1950s leveled off in the 1970s. These facts have major consequences -- both for quality of life in the United States for individual citizens and for the ability of the US to compete globally in a knowledge-based economy.

William Bowen, Matthew Chingos, and Michael McPherson have completed another important piece of research on the current social realities of higher education in the US with Crossing the Finish Line: Completing College at America's Public Universities. This research goes significantly beyond the prior important work Bowen and his collaborators have done. Here Bowen, Chingos, and McPherson have shifted focus from the issue of access (the core issue in Equity and Excellence in American Higher Education) to degree completion, and they have shifted from elite private colleges and universities to public universities -- flagships and regionals. The book is mostly concerned with first-time freshmen, but also provides valuable data on the educational careers of transfer students. (Chapter seven looks at transfer student outcomes in particular.)

The heart of their research here is the creation of a pair of large databases of students that permit tracking the outcomes of a large student population over time. They have collected data on several hundred thousand students who entered universities in 1999. One data set is the "flagship" database including records of over 120,000 students enrolled in 21 leading public universities. The second is the "state systems" database with over 60,000 students enrolled in 47 regional campuses in four states.  Here is how they describe the two databases:


The Flagships Database was assembled between September 2005 and August 2006. The core of the database is an institutional file that contains detailed demographic, academic, and financial aid data on essentially every student who entered one of 21 selective public universities in the fall of 1999 (although most universities excluded from their data students who began their studies on a part-time basis).1 The institutional file is linked with secondary data files provided by the College Board, ACT, the National Student Clearinghouse, and the Higher Education Research Institute (HERI). Additionally, the home addresses of the students have been matched to their corresponding geographical codes (“geocodes”) and can be linked to census data down to the block level.

The State Systems Database, which covers a wider range of institutions in four states—Maryland, North Carolina, Ohio, and Virginia—was assembled between June 2006 and June 2008. This database, also on the 1999 entering cohort, includes institutional files from every public university in Maryland, North Carolina, and Ohio as well as every public and private college and university in Virginia.2 Additionally, we have data on every North Carolina student who was a high school senior in 1999. These files are linked with secondary data files provided by the College Board and the National Student Clearinghouse, and the students’ home addresses have been linked to their corresponding geocodes. (Appendix B, pp. 5-6)

(The authors and the publisher have posted a 150-page PDF document on the publisher's website providing extensive details on the data sets and chief quantitative results (link).)

A particularly important data source they employ is the National Student Clearinghouse (link), which permits tracking the same student from one institution to another. NSC now encompasses over 90% of undergraduates in the United States, so it serves as an existing national tracking system. It allows us to answer the important question, what happens to a student when he/she leaves a given institution?  Does she become a permanent dropout, or does she go on to graduate from another university?  Another large data source they employ is the National Education Longitudinal Study (NELS) of the 1992 high school class.

Using these databases they are able to probe for significant differences in outcomes based on SES, race/ethnicity, gender, parental education, and type of institution.  The outcomes they are particularly interested in are completion rates, time to degree, field of study, and grades. This represents a real breakthrough in empirical studies of higher education; no existing data source had the size needed to break out these sub-populations meaningfully.  The data permit the construction of a segmented national profile of college attendance and completion, and the data sets are large enough to allow for a significant degree of testing of causal hypotheses about differences across groups.

The logical structure of the questions posed in the research looks a lot like this:
Their approach to the second type of question is to control for the readiness feature(s) using a regression or other statistical technique and examine the residual differences in an adjusted data graph. Here is an example: 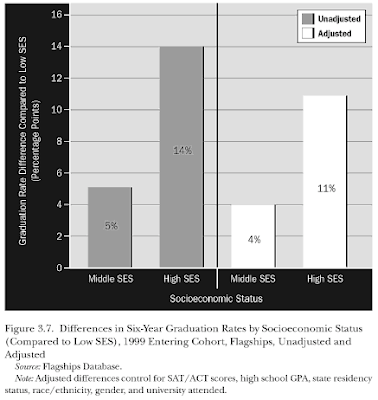 There are many striking findings in the research that speak to the profound effects of stratification on life prospects. Take bachelor's degree attainment broken out by family income (fig. 2.3a) and race/ethnicity (fig. 2.5). A young person from the bottom quartile of family income has an 11% chance of receiving a bachelor's degree, compared to a 52% chance for the person from the top quartile. There is also a major disparity between white and black young adults.  The data indicate strikingly different bachelor's degree attainment rates across race and gender: white males 29%, white females 36%, black males 10%, black females 21%. One way of reading these results is this: the cumulative disadvantages associated with poverty and race in the United States have permanent effects on the opportunities available to disadvantaged people later in life.  And our education system is not succeeding in erasing these disadvantages.  The research offered here can at least help to design institutions that are more successful in doing exactly that; and this is one of the key goals that Bowen and his colleagues have for the work:


We want to end this first chapter by reiterating that the purpose of the research reported in this book is not only to improve our understanding of patterns and relationships but also--as a high priority--to search for clues about ways to make America's colleges and universities more successful in moving entering students on to graduation. (19)