Styles of epistemology in world sociology 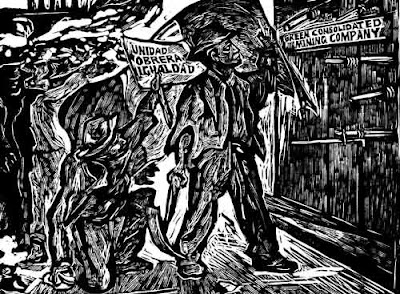 One of the basic organizing premises of the sociology of science is that there are meaningful differences in the conduct of a given area of science across separate communities, all the way down.  There is no pure language and method of science into which diverse research traditions ought to be translated.  Rather, there are complex webs of assumptions about ontology, evidence, observation, theory, method, and reasoning; and there are highly significant differences in the institutions through which scientific activities are undertaken and young scientists are trained.  Sociologists and philosophers such as Thomas Kuhn, David Bloor, Paul Feyerabend, Bruno Latour, and Wiebe Bijker have attempted to lay out the reasons for thinking these forms of difference are likely to be ubiquitous, and several of them have done detailed work in specific areas of scientific knowledge to demonstrate some of these differences.  (Here is a post on Kuhn's approach to the history of science.)

In this vein is a genuinely fascinating and important article by Gabriel Abend with the evocative title, "Styles of Sociological Thought: Sociologies, Epistemologies, and the Mexican and U.S. Quests for Truth" (Sociological Theory 24:1, 2006).  Abend attempts to take the measure of a particularly profound form of difference that might be postulated within the domain of world sociology: the idea that different national traditions of sociology may embody different epistemological frameworks that make their results genuinely incommensurable.  Abend offers an empirical analysis of the possibility that the academic disciplines of Mexican and U.S. sociology embody significantly different assumptions when it comes to articulating the role and relationships between "evidence" and "theory."  Here is how he summarizes his findings:


[The] main argument is that the discourses of Mexican and U.S. sociologies are consistently underlain by significantly different epistemological assumptions. In fact, these two Denkgemeinschaften are notably dissimilar in at least four clusters of variables ... : their thematic, theoretical, and methodological preferences; their historical development and intellectual influences; the society, culture, and institutions in which they are embedded; and the language they normally use.(2)


The core of Abend's analysis is an empirical study involving content analysis of four leading sociology journals in Mexico and the U.S. and sixty articles, randomly chosen through a constrained process.  He analyzes the articles with respect to the practices that each represents when it comes to the use of empirical evidence and sociological theory.  And he finds that the differences between the Mexican articles and the U.S. articles are highly striking.  Consider this tabulation of results on the question of the role of evidence and theory taken by the two sets of articles: 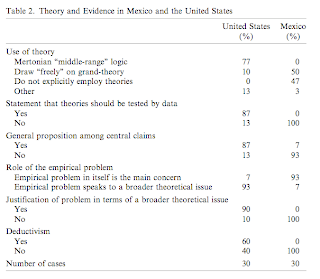 His central findings include these:
Here is a striking tabulation of epistemic differences between the two samples: 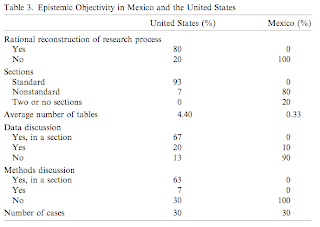 Abend believes that these basic epistemological differences between U.S. and Mexican sociology imply a fundamental incommensurability of results:


To consider the epistemological thesis, let us pose the following thought experiment. Suppose a Mexican sociologist claims p and a U.S. sociologist claims not-p.  Carnap’s or Popper’s epistemology would have the empirical world arbitrate between these two theoretical claims. But, as we have seen, sociologists in Mexico and the United States hold different stances regarding what a theory should be, what an explanation should look like, what rules of inference and standards of proof should be stipulated, what role evidence should play, and so on. The empirical world could only adjudicate the dispute if an agreement on these epistemological presuppositions could be reached (and there are good reasons to expect that in such a situation neither side would be willing to give up its epistemology). Furthermore, it seems to me that my thought experiment to some degree misses the point. For it imagines a situation in which a Mexican sociologist claims p and a U.S. sociologist claims not-p, failing to realize that that would only be possible if the problem were articulated in similar terms. However, we have seen that Mexican and U.S. sociologies also differ in how problems are articulated—rather than p and not-p, one should probably speak of p and q.  I believe that Mexican and U.S. sociologies are perceptually and semantically incommensurable as well. (27)


Though Abend's analysis is comparative, I find his analysis of the epistemological assumptions underlying the U.S. cases to be highly insightful all by itself.  In just a few pages he captures what seem to me to be the core epistemological assumptions of the conduct of sociological research in the U.S.  These include:
Abend is deliberately agnostic about the epistemic value of the two approaches; he is explicit in saying that he is interested in discovering the differences, not assessing the relative truthfulness of the two approaches.  But we cannot really escape the most basic question: where does truth fall in this analysis?  What is the status of truth claims in the two traditions?  Are there rational grounds for preferring one body of statements over the other, or for favoring one of these epistemologies over its alternative north or south?

This is important and original work.  Abend's research on this topic is an effort well worth emulating; it adds a great deal of depth and nuance to the effort to provide a philosophy of sociology.  I hope there will be further analysis along these lines by Abend and others.

(There is a lot of social observation and theory in the image above -- and no pretense of academic objectivity.  Class opposition, global property systems, and a general impression of deep social conflict pervade the image.)
Posted by Dan Little at 12:17 PM

Do the two make the same kinds of claims?

If not then they aren't "incommensurable" at all.