Chaos and coordination in social life 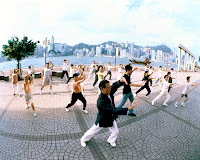 Much social behavior is chaotic, in that it simply emerges from the independent choices of numerous agents during a period of time. It is analogous to Brownian motion -- particles in a liquid moving in random motions as a result of innumerable bumps and pushes at the molecular level.

However, there are also many patterns that become visible in social behavior -- examples of what I would like to call "coordinated social action": stock market panic selling, holiday travel, rumors, style, riots, pickpockets in train stations. And we can identify many causes of coordination of individual behavior into larger patterns: commands, regulations, institutions, customs, conventions, collective plans, shared beliefs about social behavior, common sources of information, and common changes in the environment of choice, for example.

What I mean by "coordination" here is the opposite of chaos -- something analogous to the coherence of photons associated with the laser effect. In a laser a set of photons are stimulated to fire coherently with each other, resulting in a beam of light that possesses focus and parallel propagation that is different in kind from the scattered diffusion of photons from an incandescent bulb. "Coordinated" social action is a set of actions that possess synchronicity or regularity in their occurrence, resulting in an observable regularity of behavior over time and space. A crucial problem for social inquiry is to provide an explanation of the mechanisms that underlie the instances of coordinated social action that we can identify.

Examples of coordinated social action can easily be offered, and specific mechanisms can be identified that produce these forms of social coordination. An army moves in concert across a landscape (command). People drive on the right in North America (regulation). People send their children to school (institution). People greet each other with a polite "good morning" (custom). Villagers come together to fish as a group in the morning (convention). People discuss a spontaneous demonstration in front of the mayor's office on Wednesday, and many appear (collective plans). Drivers choose Route 3 rather than Route 1 because they expect a lot of traffic on Route 1 (shared beliefs). People buy a large number of batteries and chocolate, anticipating an approaching hurricane (common environmental change).

These are all mechanisms that create a degree of coordination or synchronization of behavior among independent agents. There seem to be several large categories of mechanisms here: hierarchical coordination (command, regulation); common response coordination (each individually responds to the same signal); communications and network coordination (individuals exchange messages to secure coordination); and strategic coordination (each intends to behave in a way that will be desirable given his/her expectation of actions by others). Might we try out the thought that all forms of regularities of social behavior derive from one or another of these forms of coordination? This thought is probably somewhat too strong a claim. For example, there are probably social regularities that derive from our biology and evolutionary histories -- limitations of memory, bonds of intra-group loyalty, kin altruism. But the impulse is a sound one: when we are able to observe patterns of social behavior, there must be a cause of those regularities that works its way through influence on the individual actors who constitute the domain of action. And there are only so many mechanisms that might serve.

These sorts of regularities and mechanisms constitute part of the regularity of social life, but perhaps only part. It may be that they don't capture other kinds of more "structural" regularities -- for example, "racial discrimination increases health disparities," "feudal political systems are slow to respond to external aggression", "capitalist market systems are more innovaative than planned economies". But there is an important aspect of social explanation that centers exactly on this question: what are the social mechanisms that bring a degree of coherence and coordination among the actions of a population of independent actors?
Posted by Dan Little at 5:15 PM