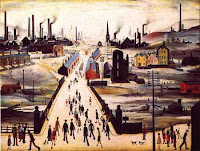 The concept of a social structure has often played a large role in social theorizing. The general idea is that society consists of an ensemble of durable, regulative structures within the context of which individuals live and act. Sometimes structures are interpreted functionally: the ensemble of structures constitute a system, and discrete structures satisfy important social functions. This is a physiological approach to society: what are the chief sub-systems in society and what do they do; how do they fit together to assure the continuing functioning of society?

There is much to fault in this set of ideas about the constituent parts of society -- for example, its tendency to reify a continually shifting social reality and its tacit assumption that the social order is a system in functional equilibrium.

But here I want to ask a smaller question: does Marx offer a social ontology that includes enduring social structures?

It would appear that the answer is a resounding "yes". Marx looks at capitalism as a system. For example, consider this statement from the Preface to the Contribution to the Critique of Political Economy:

In the social production of their life, men enter into definite relations that are indispensable and independent of their will, relations of production which correspond to a definite stage of development of their material productive forces. The sum total of these relations of production constitutes the economic structure of society, the real foundation, on which rises a legal and political superstructure and to which correspond definite forms of social consciousness. The mode of production of material life conditions the social, political and intellectual life process in general. It is not the consciousness of men that determines their being, but, on the contrary, their social being that determines their consciousness. At a certain stage of their development, the material productive forces of society come in conflict with the existing relations of production, or — what is but a legal expression for the same thing — with the property relations within which they have been at work hitherto. From forms of development of the productive forces these relations turn into their fetters. Then begins an epoch of social revolution. With the change of the economic foundation the entire immense superstructure is more or less rapidly transformed. In considering such transformations a distinction should always be made between the material transformation of the economic conditions of production, which can be determined with the precision of natural science, and the legal, political, religious, aesthetic or philosophic — in short, ideological forms in which men become conscious of this conflict and fight it out. Just as our opinion of an individual is not based on what he thinks of himself, so can we not judge of such a period of transformation by its own consciousness; on the contrary, this consciousness must be explained rather from the contradictions of material life, from the existing conflict between the social productive forces and the relations of production.

Here and elsewhere Marx picks out the forces of production and relations of production as the fundamental determinants of historical change. He identifies social classes as the chief actors in society. And he offers a conception of the capitalist mode of production as consisting of an economic base -- the economic structure -- and an ensemble of superstructural elements -- law, state, ideology, religion, culture --that stand above the economic structure and serve to preserve its conditions of reproduction. All of this invokes an ontology of social structures, social systems, and functional interdependency (G. A. Cohen, Karl Marx's Theory of History: A Defence

The functionalism implicit in this ontology has been deeply challenged (Jon Elster, Making Sense of Marx

). The bottom line of these criticisms seems inescapable: there is no basis whatsoever to expect that social structures will develop that are functionally suited to the needs of the social system. There is no process of natural selection for social arrangements. So if there is alignment across structures, we need to seek out the specific social mechanisms that bring it about.

But what about the structuralism? Is this ontology a credible one if it is separated from the functionalist assumption?

Here we need to be very careful at every step of the argument. Marx is right that Britain and France possessed a set of property relations in capital and labor in the mid-nineteenth century. These relations were distinct from those of French feudalism in the fourteenth century. These social relations are durable and coercive. Those differences created different historical dynamics in nineteenth-century Britain and France. So far so good -- there were durable, coercive social relations embodied on the two societies, and it doesn't seem misleading to call these "structures." Moreover, these structures had historical effects, much as Marx described them to have. Likewise, his definitions of "proletariat" and "capitalist" are rigorous and historically grounded. So Marx succeeds in identifying social structures in particular societies.

But here it is very important to avoid the error of reification: the assumption that the structures of capitalism are substantially the same in every capitalist society, or the same in one capitalist society over time. Rather, there are substantial and causally important differences across the basic economic institutions, and the situations of the great classes, in different capitalist societies. This is one of the central insights of the new institutionalism (Kathleen Thelen, How Institutions Evolve: The Political Economy of Skills in Germany, Britain, the United States, and Japan). These differences over time and across societies in turn imply that the structuralism of the concept of the capitalist mode of production must be abandoned as well. There is no super-category of "capitalism" and its logic that can be used to subsume the historical trajectories of multiple societies.

Finally, it bears repeating that all theories of structures require microfoundations. Structures do not exist free-standing; instead, they must be embodied on the actions and thoughts of socially constituted individuals. (See Levels of the Social for more on this.) I don't think Marx would object to this stricture -- I think he actually provides an agent-centered political economy himself. But the more holistic advocates of French structuralism (Althusser or Poulantzas, for example) would object strenuously.

So this leaves us with a pretty tame version of a Marxian structuralism. Social structures exist. They vary from society and across time. They are not functionally adapted. There are no transcendent structures possessing a unique historical dynamic. And, finally, all these claims about causally active social structures need to be compatible with microfoundations at the level of the social actors.