Retreat of the Elephants 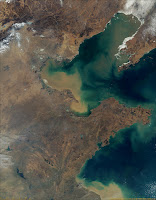 Mark Elvin's title, The Retreat of the Elephants: An Environmental History of China

, is brilliantly chosen to epitomize his subject: the human causes of longterm environmental change in China over a four-thousand year period of history. How many of us would have guessed that elephants once ranged across almost all of China, as far to the northeast as what is now Beijing? And what was the cause of this great retreat? It was the relentless spread of agriculture and human settlement.

In other words, human activity changed the physical environment of China in such a profound way as to refigure the range and habitat of the elephant. "Chinese farmers and elephants do not mix." This story provides an expressive metaphor for the larger interpretation of environmental history that Elvin offers: that environmental history is as much a subject of social history as it is a chronology of physical and natural changes. Human beings transform their environments -- often profoundly and at great cost.

This is now a familiar story, when we consider the anthropogenic influences on global warming in the past fifty years. What Elvin's book demonstrates is that human activity is an integral part of the story in the long sweep of history as well. Nowhere is this fact more evident than in Elvin's treatment of the perennial problem of water management in China. Seawalls, canals, dikes, drainage, irrigation, desalinization, and reservoirs were all a part of China's centuries-long efforts at water control. And each of these measures had effects that refigured the next period in the water system -- the course of a river, the degree of silting of a harbor, the diminishment of a lake as a result of encroachment. (Peter Perdue'sExhausting the Earth: State and Peasant in Hunan

tells a similar story about the fortunes of Hunan's Dongting Lake.) The waterscape of late Imperial China was very much a moving picture as human activity, deliberate policy interventions, technology innovations, and hydrology and climate interacted. There is a particular drama in seeing a centuries-long history of magistrates attempting to control the hydrology of the great rivers and deltas of the Yangtze and Yellow Rivers, to counteract silting and flooding and the massive problems that these processes entailed. Here the local officials made their best efforts to absorb the history of past interventions and their effects in order to design new systems that would obviate silting and flooding. This required planning and scientific-technical reasoning (137); it required large financial resources; and, most importantly, it required the mobilization of vast amounts of human labor to build dikes and polders. But always, in the end, the water prevailed.

Elvin's history is fascinating in a number of ways. He is an innovative writer of history, bringing new materials and new topics into Chinese historical research. His interweaving of agriculture, population growth, technology, and environmental change is masterful. He combines economic history, cultural history, and natural history in ways that bring continual new flashes of insight. He makes innovative use of literature and poetry to try to get some inklings into the attitudes and values that Chinese people brought to the environment. And he returns frequently to the dialectic of population growth and resource use -- a rising tempo of change that imposes more and more pressure on the natural environment.

(See The High-Level Equilibrium Trap for a discussion of one of Elvin's earlier and highly influential ideas -- the idea that Chinese agriculture had reached a stage of development by the late imperial period in which technique had been refined to the maximum possible within traditional technologies, and population had increased to the point where the agricultural system was only marginally able to feed the population. This is what he refers to as a "high-level equilibrium trap." He returns to something rather similar to this idea in Retreat of the Elephants by offering a theory of environmental exhaustion ("Concluding Remarks"): a measure of the degree to which population increase and economic growth have placed greater and greater pressure on non-renewable resources.)
Posted by Dan Little at 12:12 PM