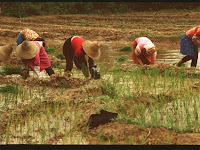 Here is one very concrete way in which we live in a global world: the most basic need that we have -- food -- is satisfied on the basis of a system with global reach and global price and production interconnections. The planet's 6+ billion people need a daily diet of grains, oils, and protein, and the most important of these foods are produced within the context of a global trading system. Current estimates of malnutrition indicate that a significant percentage of the world's population live in hunger (Facts about Hunger, PRB). And, after a decade or so of relative stability in this system, changes in the world market are threatening major disruptions of food supplies. (See an earlier posting on the recent sharp rise in rice and wheat prices.)

Consider grain production and consumption. Here are a few websites with useful information about the world grain trade in the past decade: USDA, providing a lot of data on grain production and consumption; UC-Davis, a simple introduction to the global and US rice markets; UNCTAD, a thumbnail of the basics of the global rice trade over the past two decades; FAO, a compendium of data on food production; and IRRI, a compendium of data about rice production. One thing that becomes clear in reviewing some of this data is that the current crisis in grain prices should not have been a surprise. The forecast provided in the USDA report is based on 2006-07 data -- and it gives a clear indication of the supply and price crisis that the world is facing today.

This system is interesting for UnderstandingSociety because it provides a nice example of a complex and causally interlinked social system that invites careful analysis. And it is a system that has the potential for stimulating explosive social upheaval -- given the political volatility that food prices and hunger have had historically.

We ought to ask a whole series of questions about how the food system works:

If we want to know how the global world works as a system, then we need to understand agriculture and agricultural trade better than we currently realize.

(Here is another New York Times story on the subject, highlighting the tension between food production and greenhouse gas emission reduction. See my earlier post on sustainable agriculture as well.)
Posted by Dan Little at 9:36 PM