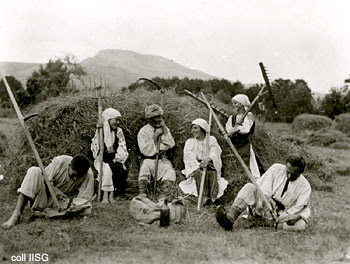 Historical demography concerns itself with two families of questions -- factual description of population behavior and explanation of the patterns that are observed. On the descriptive side, historical demographers are concerned with estimating the absolute population size of a group or region -- Tuscany in 1400, New England in 1700, the Anasazi in 1000. And they are interested in measuring the underlying demographic rates -- for example, natality, mortality, age of marriage, nutritional and health status, or sex ratios.

And, to make useful comparisons, these measurements need to be linked to the same variables over time and comparable populations over the same time period. This set of observations permits the discovery of trends and patterns -- steady population growth in group A simultaneous with flat population size in group B; high rate of growth for C during 1700-1750 followed by slow growth in the next 50 years; high population density in agricultural region D compared with low density in agricultural region E.

The descriptive task is a difficult one. But it immediately raises a host of explanatory questions. What are the social mechanisms that conjoin to bring about the complex observed demographic outcomes? Population outcomes are the result of myriad choices by anonymous individuals; and yet the outcomes are highly patterned. The task of explanation arises when we try to make sense of the demographic behavior and outcomes that are discovered. What are the material and social circumstances that explain the trends we observe and the differences that emerge across populations?

Thomas Malthus offered an explanation of large population trends based on both material and social factors: the food-production capacity of the land inhabited and the norms and institutions regulating family formation and child-bearing. Malthus's theories suggest relating population size and growth rates to measures of economic prosperity -- for example, measures of the real wage for farm laborers over time, measures of the fluctuations in availability of jobs, or measures of available land per unit of population. The classic Malthusian argument predicts that population growth will lag economic fluctuation: rising wages encourage higher fertility and falling wages discourage fertility. And if population continues to rise in declining economic circumstances, then eventually mortality will rise -- again suppressing population growth.

, P. 70.
The simple Malthusian theory, then, postulates that population expands to the limit created by available sources of food. So increases in farm productivity and increases in arable land should give rise to an increase in population, whereas a rising population density on a given territory will eventually lead to the "negative" checks of famine and nutrition-based mortality if not pre-empted by the preventive checks of reduced natality.

The question of scale, both temporal and regional, makes a large difference in the explanatory quest. We can frame the question of group demographic behavior from the micro- to the macro-levels -- from a handful of Alpine villages in the 16th century (population 5000) to the Yangzi delta in the 18th century (population 300 million). Micro-trends may have a different explanations than macro-trends.

It might be maintained that the Malthusian theory is only well-suited to the largest scale: large territory and long timeframe. In the longterm it is almost tautological to observe that a population will expand to the limits created by environmental resources. But long before those limits are approached, there is ample space for the workings of social arrangements to modulate population behavior. Alternative economic and demographic institutions create different demographic profiles. Birth spacing (reflecting family choices and cultural values) can dramatically influence total fertility. Technologies of birth control -- both traditional and modern -- can move a population from high-fertility to medium- or low-fertility. So historical demography requires social explanation based on discovery of concrete and specific institutions in local circumstances, not simply broad-brush hypotheses about resource limits.

Recent studies of population behavior across the expanse of Eurasia confirm this point. The Eurasian Demography Project finds that there is a wide range of demograhic patterns across the locales of Eurasia, from Finland to Italy to China to Japan. And the Malthusian picture works only at the coarsest level; in particular, it turns out that the Chinese population did not teeter on the edge of Malthusian crisis.

(See Eurasian Historical Comparisons for more on the Eurasian Demography Project.)
Posted by Dan Little at 10:56 AM

Thanks. It was nice to see this posting via Economist's View blog.

The mathematical ecology inspired models of Turchin and Koroyateve also provide some ways to think about demographic transitions, incorporating warfare and food supply into the demographic equation:

Unfortunately concrete data is not available for most societies such as those of mainland Southeast Asia which I have published on recently, citing models such as Boserup in addition to Malthus: