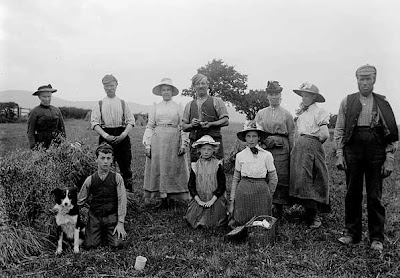 Why do people cooperate? That is, what motivates individuals to come together to share labor and resources in pursuit of a common good from which they cannot be excluded -- fighting fires, hunting marauding tigers, cleaning up a public beach? Standard rational choice theory, and its application to problems of individual rationality in group settings, implies that cooperation should be unstable in the face of free-riding. This was Mancur Olson's central conclusion in his classic book The Logic of Collective Action: Public Goods and the Theory of Groups

. Roughly, his conclusion was that cooperation would be possible only if there were excludable side benefits for participants, selective coercion to enforce cooperation, or privatization of the gains of collective action. Otherwise, it is prisoners' dilemmas all the way down. However, we know from many social contexts that individuals do in fact succeed in establishing cooperative relationships without any of these supporting conditions. So what are we missing when we consider social action from the narrow perspective of rational choice theory?

A part of the answer to this puzzle involves the role of norms in action. Here the criticism is that the rational-choice approach, by attending solely to calculations of self-interest, is blind to the workings of normative frameworks; but in fact norms are powerful factors underlying behavior in most traditional contexts. This perspective finds expression in the moral economy literature within peasant studies -- e.g. James Scott's The Moral Economy of the Peasant: Rebellion and Subsistence in Southeast Asia

. (This debate is sometimes referred to as one between formalists and substantivists. Karl Polanyi is another good example of the substantivist perspective (The Great Transformation

), while Sam Popkin (The Rational Peasant: The Political Economy of Rural Society in Vietnam

) and Theodore Schultz (Transforming Traditional Agriculture) fall on the side of the formalists.)

According to the substantivist perspective, traditional societies are communities: tightly cohesive groups of persons sharing a distinctive set of values in stable, continuing relations to one another (Michael Taylor Community, Anarchy and Liberty

). The central threats to security and welfare are well-known to such groups--excessive or deficient rainfall, attacks by bandits, predatory tax policies by the central government, etc. And village societies have evolved schemes of shared values and cooperative practices and institutions which are well-adapted to handling these problems of risk and welfare in ways which protect the subsistence needs of all villagers adequately in all but the most extreme circumstances. The substantivists thus maintain that traditions and norms are fundamental social factors, and that individual behavior is almost always modulated through powerful traditional motivational constraints. One consequence of this modulation is that many societies do not display a sharp distinction between group interest and individual interest that is predicted by collective action theory. (An important theoretical defense of this conclusion can be found in the work of Elinor Ostrom and her fellow researchers in their treatment of "common property resource regimes"; see Governing the Commons: The Evolution of Institutions for Collective Action

There are, of course, well-known social and behavioral processes that may tend to undermine the working of a given set of norms. Normative systems are inherently ambiguous and subject to revision over time. Consequently we should expect that opportunistic agents will find ways of adapting given social norms more comfortably to the pursuit of self-interest. Consider the requirement that elites should provide for the subsistence needs of the poor in times of dearth. There are some grounds for supposing that such a requirement is in the longterm interest of elites--for example, by promoting social stability and establishing bonds of reciprocity with other members of an interdependent society. But it seems reasonable to expect that elites--already by their superior economic position able to exercise political and social power as well--will find ways of limiting the effect of such norms on their behavior. So it is insufficient to simply postulate a set of governing norms; we need to identify the mechanisms at the group and individual levels that make them behaviorally relevant and stable. But, significantly, some theorists have tried to show that rational self-interest may actually reinforce certain kinds of norms of fairness and reciprocity; thus Robert Axelrod's analysis of the dynamics of reciprocity demonstrates that cooperation is rational in relation to a variety of circumstances of face-to-face cooperation in The Evolution of Cooperation: Revised Edition

These points notwithstanding, there remains a credible line of criticism of the rational-choice paradigm based on the role of norms in behavior. For it is clear that individuals pay some attention to normative constraints within the process of rational deliberation. The model of simple maximizing decision-making is overly abstract; instead, we need to have a conception of rational action that permits us to incorporate some consideration of normative requirements as well as purposes and goals. We need a broader conception of practical rationality that incorporates both means-end rationality and normative deliberation; we need a theory that embraces both Mill and Aristotle.

A number of social scientists have taken this point seriously. Particularly profound is the critique of pure rational choice theory offered by Amartya Sen in an essay called "Rational Fools" (jstor link; and here is the introduction to a recent symposium on the article in Economics and Philosophy). Sen criticizes the assumption of pure self-interest which is contained in the standard conception. Against the assumption of self-interested maximizing decision-making, Sen argues for a proposal for a more structured concept of practical reason: one which permits the decision-maker to take account of commitments. This concept covers a variety of non-welfare features of reasoning, but moral principle (fairness and reciprocity) and altruistic concern for the welfare of others are central among these. Sen believes that the role of commitment is centrally important in the analysis of individuals' behavior with regard to public goods, and he draws connections between the role of commitment and work motivation. He argues, therefore, that in order to understand different areas of rational behavior it is necessary to consider both utility-maximizing decision-making and rational conduct influenced by commitment; and it is an empirical question whether one factor or the other is predominant in a particular range of behavior. Thus Sen holds that an adequate theory of rationality requires more structure than a simple utility-maximizing model would allow; in particular, it needs to take account of moral norms and commitments.

These arguments are telling; the model of narrow economic rationality makes overly restrictive assumptions about the role of norms in rational behavior. Human behavior is the resultant of several different forms of motive--self-interest, fairness, and altruism; and several different types of decision-making processes--maximizing and deliberation. A more adequate model of broadened practical rationality therefore needs to incorporate a decision rule that represents the workings of moral constraints and commitments as well as goal-directed calculation. This rule should reduce to the familiar utility maximizing rule in circumstances in which moral constraints are not prominent -- e.g., in decision-making within a market. But in situations where important norms of behavior are in play, we need to try to reproduce the more complex deliberation processes that real human decision-makers undergo in order to combine their normative commitments and their goals and preferences.

This is not a small problem, however; for one of the chief merits of the paradigm of narrow economic rationality is its parsimony--the fact that it reduces rational choice to a single dimension of deliberation. Once we require that rational choice theory needs to take normative constraints and commitments into account as well as interests, it is much more difficult to provide formal models of rational choice. However, some progress has been made on this problem. For example, Howard Margolis (Selfishness, Altruism, and Rationality

) attempts to formalize represent rational deliberation in the presence of public goods as the result of two utility functions, one representing the individual's private interests and the other the individual's appraisal of the public good; the two functions are then aggregated by a higher order decision rule. (John Harsanyi makes similar arguments.)

This broadening of the conception of individual rationality has important implications. For example, consider public goods problems. Once we consider a more complex theory of practical deliberation, formal arguments concerning freeriding problems in real social groups will be indeterminate. On a more complex, and more empirically adequate, account of practical reason, conditional altruism, cooperation, and reciprocity may be deliberatively rational choices; therefore we would expect a social group consisting of rational individuals to show signs of cooperation and conditional altruism. And the challenge for sociology is to identify the mechanisms of individual deliberation and social reinforcement that serve to stabilize the system of norms and the behaviors that conform to them. This is one of the tasks that the field of new institutionalism has taken on (Mary Brinton and Victor Nee, eds., The New Institutionalism in Sociology