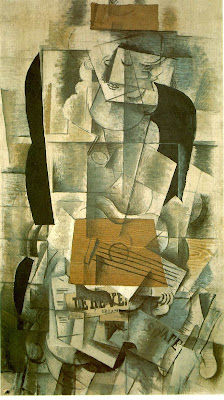 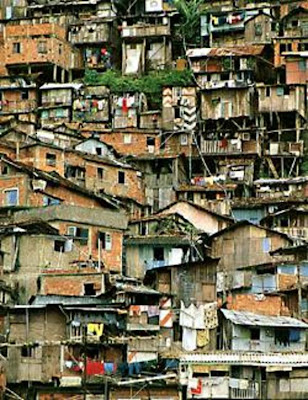 Image: Mexico City slum
Modernity is remarkably hard to define or capture. We might try this ostensive definition: it is the culture, mental framework, and social reality of the world created by the industrial revolution, mass society, urban life, and mass literacy and communication. It is the world of anonymous social relations, the market as a central social reality, the rational-bureaucratic state, and mass public opinion. It is what came after "the world we have lost" (Peter Laslett's evocative phrase in The World We Have Lost: England Before the Industrial Age) -- the pre-modern world of direct, face-to-face social relations, powerful religious beliefs, traditional regulation of village society, and very low levels of mobility for the individual. Stability, continuity, locality, and legible social relations capture the pre-modern world. And the modern world overturns each of these.

English critic (and blogger before his time) Thomas Carlyle saw it coming -- and he didn't care for it. Here are some of his descriptions of the social reality coming to England in the 1820s in Past and Present

The condition of England, on which many pamphlets are now in the course of publication, and many thoughts unpublished are going on in every reflective head, is justly regarded as one of the most ominous, and withal one of the strangest ever seen in this world. England is full of wealth, of multifarious produce, supply for human want in every kind; yet England is dying of inanition. With unabated bounty the land of England blooms and grows; waving with yellow harvests; thick-studded with work-shops, industrial implements, with fifteen millions of workers, understood to be the strongest, the cunningest, and the willingest our Earth ever had ... and behold, some baleful fiat as of Enchantment has gone forth, saying, "Touch it not, ye workers, ye master-workers, ye master-idlers; none of you can touch it, no man of you shall be the better for it; this is enchanted fruit!" (Book I, ch. 1)

But, it is said, our religion is gone: we no longer believe in St. Edmund, no longer see the figure of him "on the rim of the sky," minatory or confirmatory? God's absolute Laws, sanctioned by an eternal Heaven and an eternal Hell, have become Moral Philosophies, sanctioned by able computations of Profit and Loss, by weak considerations of Pleasures of Virtue and the Moral Sublime. (Book III, ch. 1)

And in fact, I think the task of making sense of a rapidly changing social reality was as stunning in the 1840s as it is today -- Karl Marx, Thomas Carlyle, Alexander Herzen, Friedrich Engels, and Mikhail Bakunin all turned their imaginations and their critical abilities to the task of conceptualizing the changes that were sweeping across Europe and the globe in the first part of the nineteenth century. (Steven Marcus does a good job of capturing the cognitive and imaginative challenge faced by reflective observers in the early nineteenth century in Engels, Manchester, and the Working Class

Here is how art historian T. J. Clark reflects on the meaning of "modernity" in his spectacular book, Farewell to an Idea: Episodes from a History of Modernism

"Modernity" means contingency. It points to a social order which has turned from the worship of ancestors and past authorities to the pursuit of a projected future -- of goods, pleasures, freedoms, forms of control over nature, or infinities of information. This process goes along with a great emptying and sanitizing of the imagination. Without ancestor-worship, meaning is in short supply -- "meaning" here meaning agreed-on and instituted forms of value and understanding, implicit orders, stories and images in which a culture crystallizes its sense of the struggle with the realm of necessity and the reality of pain and death. The phrase Max Weber borrowed from Schiller, "the disenchantment of the world," still seems to me to sum up this side of modernity best. (7)

"Secularization" is a nice technical word for this blankness. It means specialization and abstraction; social life driven by a calculus of large-scale statistical chances, with everyone accepting (or resenting) a high level of risk; time and space turned into variables in that same calculus, both of them saturated by "information" and played with endlessly, monotonously, on nets and screens; the de-skilling of everyday life (deference to experts and technicians in more of the microstructure of the self); available, invasive, haunting expertise; the chronic revision of everything in the light of "studies." I should say straightaway that this cluster of features seems to be tied to, and propelled by, one central process: the accumulation of capital, and the spread of capitalist markets into more and more of the world and the texture of human dealings. (7)

Is it not the case that the truly new, and disorienting, character of modernity is its seemingly being driven by merely material, statistical, tendential, "economic" considerations? We know we are living a new form of life, in which all previous notions of belief and sociability have been scrambled. And the true terror of this new order has to do with its being ruled -- and obscurely felt to be ruled -- by sheer concatenation of profit and loss, bids and bargains: that is, by a system without any focusing purpose to it, or any compelling image or ritualization of that purpose. It is the blindness of modernity that seems to me fundamental, and to which modernism is a response. (8) 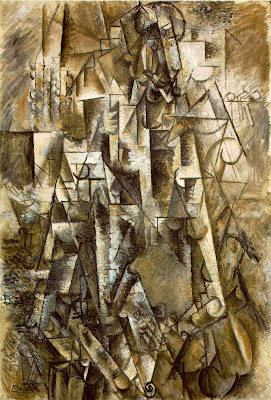 painting: Pablo Picasso, The Poet (1911)
And what about the city? How does the sociology of the city shed light on the cultural reality of the modern world? The modern city represented a coming-together of many of the currents of social change that constituted the heterogeneous mix of "modernity." A large and disconnected population, substantial inequalities, civic anonymity, alienation, bureaucratic administration, modern policing and public services, street cars, and a virtual absence of overarching social solidarity conjoined to create a jangled social configuration with the angular properties of a modernist portrait.

An earlier posting focused on Engels's sociology of the city. But here is how Georg Simmel puts it in "The Metropolis and Modern Life":

The deepest problems of modern life flow from the attempt of the individual to maintain the independence and individuality of his existence against the sovereign powers of society, against the weight of the historical heritage and the external culture and technique of life. This antagonism represents the most modern form of the conflict which primitive man must carry on with nature for his own bodily existence. The eighteenth century may have called for liberation from all the ties which grew up historically in politics, in religion, in morality and in economics in order to permit the original natural virtue of man, which is equal in everyone, to develop without inhibition; the nineteenth century may have sought to promote, in addition to man's freedom, his individuality (which is connected with the division of labour) and his achievements which make him unique and indispensable but which at the same time make him so much the more dependent on the complementary activity of others; Nietzsche may have seen the relentless struggle of the individual as the prerequisite for his full development, while socialism found the same thing in the suppression of all competition -- but in each of these the same fundamental motive was at work, namely the resistance of the individual to being leveled, swallowed up in the social-technological mechanism. 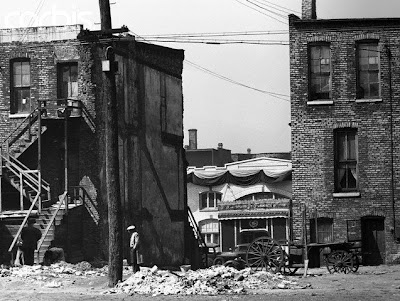 , for some very thoughtful discussions of the study of "modernity" by contemporary historical sociologists.)
Posted by Dan Little at 2:47 PM

The disenchantment of the world is an interesting concept, but a difficult one for me. I can understand it in terms of the life of an individual who sees the past slipping away. Perhaps it's just the folly of youth, but I wonder if at some point a generation (mine or one later) will stop feeling disenchanted, like they are constantly scrambling to hold onto what they know and love in the face of change. Rather, by embracing change they will also embrace modernity, and change will become its own sort of enchantment - a different sort, but still something. A man on the moon, robots on mars, a black president, the ability to talk with your parents face-to-face 2000 miles away. The future is getting cooler day by day, if more frightening. But fear is a sort of enchantment of its own - it requires an agreed upon meaning. The crisis of the environment that we are collectively coming to grasp upends notions of high modernity and the triumph of human ingenuity over the forces of nature. Time and space have become variables, but awesomely complicated ones, whose mysteries propel us to the stars in search of dark matter, dark energy, Hawking radiation (literally, something from nothing).

Anyway, dropping the theatrics, I wonder: will we (collectively) get over modernity and its disenchantment and move on to something else? I think it's possible, if not likely. I look to artists like Warren Ellis (a graphic novelist) who embrace the future and change, constantly pushing to see how far we've gotten, how far we can go, and how ugly and pretty it will be when we get there. His worlds are strange, and often unpleasant, but never... banal, secular or lacking in color.

I think only a relatively few highly-educated people really experience the disenchantment of the world. It's something they raed about in university, and so they come to believe it. Keep in mind that a majority of Americans doesn't even believe in evolution or the notion that the Earth is billions of years old. Large numbers of Americans believe that they and God speak to one another. Many people believe in miracles as fervently now as their ancestors had done. For all of these people, the world is far from disenchanted; indeed, it is the opposite--thoroughly enchanted. This is a world in which God protects a loved one on a dangerous road, or ensures that the local food pantry has enough food when it is needed.

Intellectuals may live in modernity and consume the products of modernist culture. Large majorities of people pay no attention to such things, and go on to live lives they believe are enchanted.