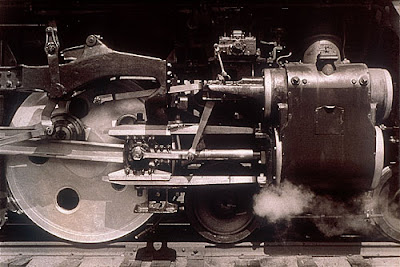 Photo: Charles Sheeler, "Power, wheels", 1939; MFA, Boston
Technology is sometimes thought of as a domain with a logic of its own -- an inevitable trend towards the development of the most efficient artifacts, given the potential represented by a novel scientific or technical insight. The most important shift that has occurred in the ways in which historians conceptualize the history of technology in the past thirty years is the clear recognition that technology is a social product, all the way down. And, as a corollary, historians of technology have increasingly come to recognize the deep contingency that characterizes the development of specific instances or families of technologies.

Thomas Hughes is one of the most important and prolific historians of technology of his generation. His most recent book, Human-Built World: How to Think about Technology and Culture

, is well worth reading. It looks at "technology" from a very broad perspective and asks how this dimension of civilization has affected our cultures in the past two centuries. The twentieth-century city, for example, could not have existed without the inventions of electricity, steel buildings, elevators, railroads, and modern waste-treatment technologies. So technology "created" the modern city. But it is also clear that life in the twentieth-century city was transformative for the several generations of rural people who migrated to them. And the literature, art, values, and social consciousness of people in the twentieth century have surely been affected by these new technology systems.

This level of analysis stands at the most generic perspective: how does technology influence culture? (And perhaps, how does culture influence technology?) What Hughes has demonstrated in so much of his work, though, is the fact that the most interesting questions about the "technology-society" interface can be framed at a much more disaggregated level. Consider some of the connections he suggests in his earlier book on the history of electric power (Networks of Power: Electrification in Western Society, 1880-1930

):
Each part of this complex story involves processes that are highly contingent and highly intertwined with social, economic, and political relationships. And the ultimate shape of the technology is the result of decisions and pressures exerted throughout the web of relationships through which the technology took shape. But here is an important point: there is no moment in this story where it is possible to put "technology" on one side and "social context" on the other. Instead, the technology and the society develop together.

Hughes also explores some of the ways in which the culture of the machine has influenced architecture, art, and literature. He discusses photography by Charles Sheeler (whose famous series on the Rouge plant defined an industrial aesthetic), artists Carl Grossberg and Marcel Duchamp, and architects such as Peter Behren. The central theme here is the idea that industrial-technological developments caused significant cultural change in Europe and America. Hughes's examples are mostly drawn from "high" culture; but historians of popular culture too have focused on the impact of technologies such as the railroad, the automobile, or the cigarette on American popular culture. See Deborah Clarke's Driving Women: Fiction and Automobile Culture in Twentieth-Century America

for a discussion of the effect of automotive culture. And Pam Pennock's examination of the effects of alcohol and tobacco advertising on American culture in Advertising Sin And Sickness: The Politics of Alcohol And Tobacco Marketing, 1950-1990

Hughes doesn't consider here the other line of influence that is possible between culture and technology: how prevailing aesthetic and cultural preferences influence the development of a technology. This has been an important theme in the line of interpretation referred to as the "social construction of technology" (SCOT). Wiebe Bijker makes the case for the social construction of mundane technologies such as bicycles in Of Bicycles, Bakelites, and Bulbs: Toward a Theory of Sociotechnical Change

. And automobile historian Gijs Moms argues in The Electric Vehicle: Technology and Expectations in the Automobile Age

that the choice between electric and internal combustion vehicles in the early twentieth century turned on aesthetic and lifestyle preferences rather than technical or economic efficiency. (Here is a nice short discussion of SCOT.) This too is a more disaggregated approach to the question. It proceeds on the idea that we can learn a great deal by examining the "micro" processes in culture and society that influence the development of a technology.

It seems to me that the conceptual framework of "assemblages theory" would be useful in discussing the history of technology. (See Manuel DeLanda's A New Philosophy of Society: Assemblage Theory And Social Complexity

for a review of the theory, and Nick Srnicek's blog at accursedshare, which makes frequent use of the framework.) The framework is useful here because technology is a social phenomenon that extends from one's own kitchen and household to the cities of Chicago or Berlin, to the global internet and the international system of manufacturing and design. And similar processes of shaping and conditioning occur at the micro, meso, and macro levels. In other words -- perhaps we can understand "technology" at the molar level, as a complex composition of activities and processes at many levels closer to the socially constructed individual. And the value-added provided by the sociology and history of technology is precisely this: to shed light on the mechanisms at work at all levels that have an influence on the aggregate direction and shape of the resulting technology.

Since we're thinking about "technology and culture" -- it's worth noting that Technology and Culture is the world's leading journal for the history of technology, emanating from the Society for the History of Technology (SHOT, established in 1958). The journal has played a significant role in the definition of the discipline over the past thirty years or so and is an outstanding source for anyone interested in the questions posed here.
Posted by Dan Little at 8:38 AM