France as a "nation" 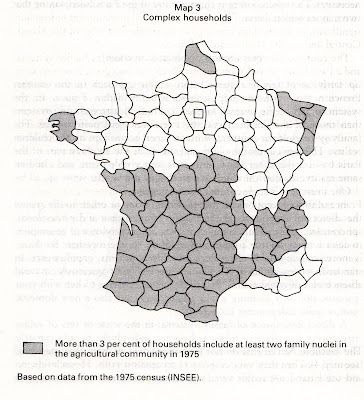 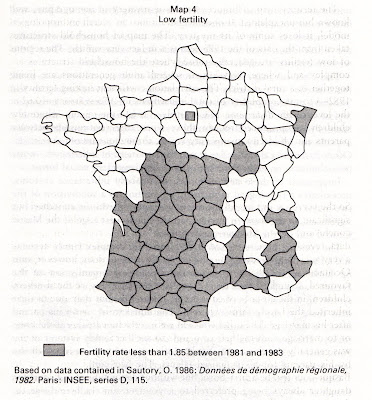 Is France one nation? What makes it so? And what are the large socio-cultural factors that led to modern France? These are the questions that Emmanuel Todd raises in The Making of Modern France: Ideology, Politics and Culture

. Todd is one of this generation's leading historians in France, and his conception of the challenge of history is worth studying. I would call him a "macro-historian", in that he is interested in large processes of change over extended stretches of space (for example, the extension of industry across the map of France from 1850 to 1970, or the patterns of religious dissent from the twelfth to the twentieth centuries), and he singles out characteristics of family structure, demography, literacy, and religion as a set of causal factors that explain the patterns of historical change that he uncovers.
Todd's starting point seems exactly right to me: the "nation" is not a particularly salient level of analysis for making sense of large historical change. Social, economic, and political developments should not be presumed to unfold at the level of the nation. He puts forward a simple but apt criterion for choosing a level of analysis for historical inquiry: "one has to observe the social and economic behaviour of the human beings in question and discover their scale in order to define closed and homogeneous groups which then can be called society X or economy Y" (7). And in fact, he argues that "France" is better understood as a configuration of regions and zones than as an integrated national system. As he puts the point, "one can represent France as a heterogeneous and open area in which social, economic and political forces emerge, spread and establish themselves quite independently of the central power and of the overall national structure" (8). And: "Notions of 'French society', 'French economy', 'French industry', 'French working class' are to some extent myths" (7). (It is interesting to observe that this is one of G. William Skinner's central insights into Chinese history as well, especially in his analysis of the historical relevance of "macroregions" in China. Here's an earlier post on Skinner's work.)
So what are the patterns and causal factors that have given rise to "modern France" in Todd's reckoning? Crudely, Todd argues that there are large regional patterns of culture, demography, and property that created distinct dynamics of change across eight centuries of French history. The southern half of France is characterized by complex family systems with several generations in the same household and a low rate of reproduction, in contrast to the nuclear families of the north and their higher rate of reproduction. The family values of the southern region gave greater importance to literacy and education than the nuclear (and larger) families of the north. And family structure, patterns of inheritance, and land tenure are in turn highly relevant to the formation of large patterns of ideology. (A similar logic is expressed in another of Todd's books, The Explanation of Ideology: Family Structure and Social Systems (Family, Sexuality and Social Relations in Past Times)

.)
The central analytical device in Todd's argument is a fascinating series of maps of France coding the 90 départements of France by such variables as the percent of women holding the baccalauréat, the percentage of priests accepting the serment constitutionnel (revolutionary loyalty oath) in 1791, or the percentage of workers in a given industrial sector. The maps display striking geographical patterns documenting Todd's interpretation of the large historical patterns and their underlying anthropological and geographical causes. At the largest scale, he argues for three axes of historical causation: a north-south axis defined by family structure that creates differentials of literacy and population growth; an east-west axis defined by the diffusion of industry from northern Europe into eastern France and across the map from east to west; and a political pattern different from both of these, extending from Paris at the political center to the periphery in all directions. The following is a great example; Todd is interested in observing the degree of "religiosity" across France around the time of the Revolution, and he uses the percentage of priests who accepted the oath of allegiance demanded by the Revolutionary government as a measure. The resulting map reveals conspicuous patterns; the periphery and the south stand out as non-conformist. 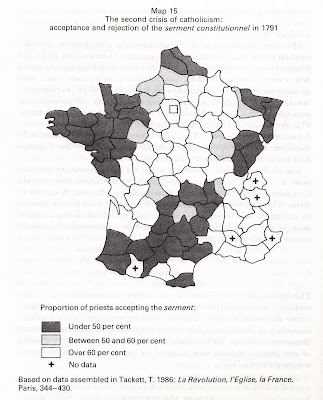 Todd also argues that there is a causal order among the large social factors he singles out. Family structure is causally relevant to literacy and education level; literacy is relevant to religious dissent and the emergence of Cathars, Waldensians, and Protestants; family structure is relevant to reproductive rates which are in turn relevant to the spread of industry; and traditions of inheritance are relevant to a region's receptiveness to the ideology of the Revolution. And the patterns created by these causal processes are very persistent; so the southern belt of high-literacy départements of the twelfth century coincides almost exactly with the pattern of high incidence of baccalauréats and doctors in the late twentieth century.
A particularly interesting part of Todd's analysis for me is his effort to map out the agrarian regimes of pre-revolutionary France (the ancien régime). He observes that this hasn't been done by existing studies of French rural society, and that there is no suitable statistical data on the basis of which to do so for the eighteenth century in any case. However, he makes use of the first census in 1851 to infer back a century in order to arrive at an analysis into four categories: large estates with hired labor, peasant proprietorship, tenant farming, and share-cropping. And using the mid-nineteenth century census data he constructs this map: 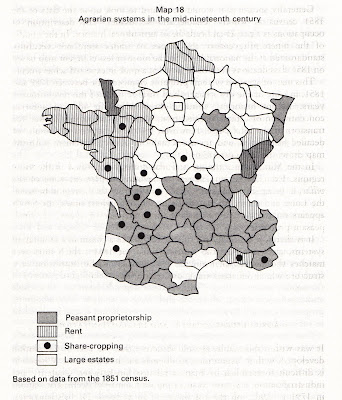 Note that the large estates are concentrated in the center of France, including Paris; while peasant proprietorship (sometimes combined with share-cropping) predominates in the southern tier. Note as well how closely these patterns conform to the distribution of family structure and fertility at the top of the posting. And Todd argues that these patterns showed substantial continuity before and after the Revolution (61). In other words, there is a very substantial overlap between agrarian regimes and the anthropological-demographic patterns discussed earlier. Todd then uses these geographical patterns to explain something different: the pattern of de-christianization that took place over the century following the Revolution. Basically, de-christianization is associated with the regions involving a large number of landless workers, whereas this cultural process was least virulent in regions of peasant proprietorship. Todd summarizes this way:

The link between family and agrarian system will help us to understand why dechristianization gained ground, from 1791 onwards, in regions of large farms and share-cropping, and met with resistance in provinces where tenant farming and peasant proprietorship were predominant. This proposition can, moreover, be reformulated thanks to equivalences between family types and agrarian systems. Dechristianization spread in regions where the family structure was egalitarian nuclear or community, but failed in provinces where the family was stem or absolute nuclear.

In other words -- an explanation of ideology and religion in terms of a set of demographic and social characteristics that are distributed differentially across regions.

I haven't touched on the dynamics of politics at all here, which is an important piece of Todd's work. But these comments suffice to illustrate the pattern of historical thinking represented by Todd's work. It is striking for its effort to cross genres, incorporating geography, anthropology, and sociology into the formation of large interpretations of French history. And it is striking for the scale of the canvas that he attempts to paint.